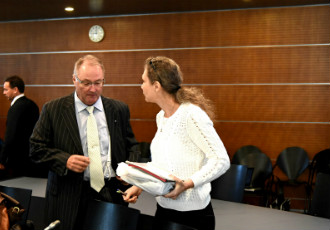 The question of third party involvement is expected to determine the outcome of proceedings at the Vaasa Court of Appeal as it convened on Monday to yet again consider the charges brought against Anneli Auer over the death of her husband Jukka S. Lahti in Ulvila in 2006.

The Supreme Court in 2012 consigned the case back to the district court on grounds of the vast amount of new evidence presented by both the defence and prosecution.

The Vaasa Court of Appeal had acquitted Auer of charges a year earlier after concluding that reasonable doubt about third party involvement persisted.

On Monday, district prosecutor Kalle Kulmala presented in his opening statement the interpretation of the prosecution of the course of events, calling attention to factors that allegedly rule out the possibility of third party involvement.

“We believe the crucial question to be whether or not an intruder entered the house and killed Jukka Lahti in the fashion and time-frame described by Anneli Auer. This is a question of the credibility of Auer's testimony,” Kulmala said.

According to the prosecution, the homicide was the result of a domestic dispute, during which Auer had threatened to file for a divorce.

“At some point, they went into the kitchen, where Lahti held his wife to stop her from leaving. One of them grabbed a kitchen knife,” Kulmala described the events on the fateful night.

Auer, in turn, insisted that she and her husband had no intention of divorcing and only argued about mundane matters, such as which one would take the children to the dentist or return books to the library.

She was also adamant on third party involvement.

The prosecution contrastively called attention to a number of factors that allegedly rule out the possibility of third party involvement, such as the fact that no signs of the alleged intruder are audible on the emergency call recording.

The oldest child of Auer has told in interrogations that she saw the perpetrator, a man in a hooded sweatshirt, leave the family's home on the night of the homicide. Her account of the events was a key item of evidence in the acquittal of Auer in 2011.

The account cannot be true, the prosecution argued on Monday. “The daughter did not see an intruder in her parents' bedroom, despite going there twice to check up [on them],” Kulmala said.