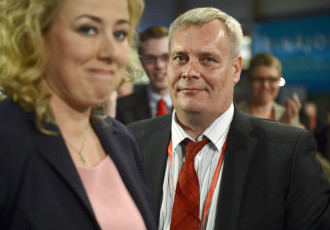 After her loss in the race for the helm of the Social Democratic Party (SDP), Jutta Urpilainen (SDP) has revealed that she has no intention to continue as the Minister of Finance or as a member of the SDP ministerial group.

The portfolio of the Minister of Finance, she argued, is the most high profile in the Government and therefore belongs to the SDP chairperson – the newly-elected Antti Rinne. “Power and responsibility go hand in hand,” Urpilainen stated.

“The new chairperson must take the lead,” she underlined in a press conference on Friday afternoon.

Urpilainen said that she will sit down with Rinne later to determine when she will hand over her ministerial portfolio.

Rinne, a seasoned trade union boss, was on Friday elected as the new SDP chairperson, the votes tipping 257—243 in his favour at the SDP party conference in Seinäjoki. “I now understand how Juha Mieto felt in Lake Placid,” Urpilainen commented on the close election.

“Overall, I feel disappointed. You are always in a race to win,” she conceded.

In addition, Urpilainen estimated that the election result would probably inflict wounds within the SDP, stressing that it is now crucial to ensure they are attended properly. “The new chairperson is responsible for that,” she said.

Rinne, in turn, called for patience in his victory speech. “We all know that there are no quick fixes for the situation of the SDP,” he underlined. “We must all roll up our sleeves. Our first objective is the European elections.”

“I know we can lift the SDP to new splendour.”

The newly-elected chairperson also said that the SDP is prepared to continue along the lines of the government programme, although certain modifications may be sought in the negotiations in June. “There will be more emphasis on employment and economic growth, I can say that much,” he pledged.