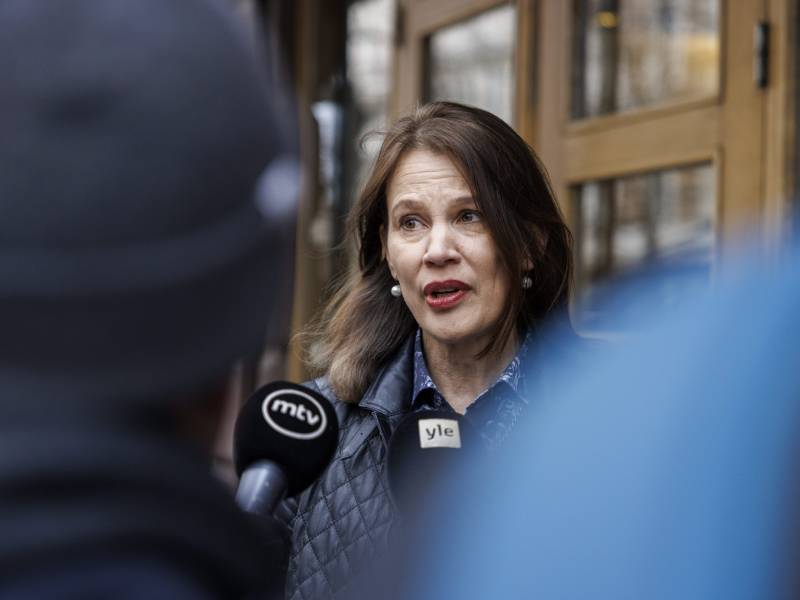 Elina Pylkkänen, a permanent state under-secretary at the Ministry of Economic Affairs and Employment, spoke to reporters outside the office of the national conciliator in Helsinki on Thursday, 28 April 2022. (Seppo Samuli – Lehtikuva)

A WEEK-LONG STRIKE shutting down public facilities such as libraries, kindergartens and schools is set to begin in 10 cities across Finland on Tuesday.

The likelihood of the strike increased notably yesterday as the advisory board established to resolve the long-running labour dispute chose not to present a settlement proposals due to insurmountable differences between the parties to the dispute, according to Elina Pylkkänen, the state under-secretary in charge of the advisory board appointed by Minister of Employment Tuula Haatainen (SDP).

The strike is to cover a total of 81,000 employees in Espoo, Helsinki, Jyväskylä, Kauniainen, Kuopio, Oulu, Rovaniemi, Tampere, Turku and Vantaa, according to YLE. In the capital region alone, roughly 31,000 employees are set to go on strike.

The City of Helsinki on Wednesday decided that its Finnish-language schools will be closed due to the strike.

Pylkkänen told Helsingin Sanomat that the board needs more time to present a settlement proposal because the parties remain too far apart particularly on questions linked to remuneration and payroll structure.

“It’s impossible to submit a settlement proposal. Our work will continue,” she said, refusing to estimate how long it will take for the parties to find enough common ground to make presenting a proposal worthwhile.

“When our strikes start on 3 May, the work of the advisory board will become even more difficult. Negotiations between representatives of the municipal sector don’t currently look like a realistic possibility, although we are not ruling it out completely,” said Olli Luukkainen, the board chairperson at the Negotiating Organisation for Public Sector Professionals (JUKO).

The Union of Health and Social Care Professionals (Tehy) and the Finnish Union of Practical Nurses (Super), meanwhile, have announced their readiness to resort to mass resignations in an attempt to resolve their dispute with Local and County Government Employers (KT).

Trade unions have called for multiyear remuneration programmes in addition to general wage increases to tackle what they have described as retarded wages. Tehy and Super, for example, have called for a five-year programme that would increase wages by 3.6 per cent on top of the general increases.

An agreement on a general increase of around two per cent is in place for this year.