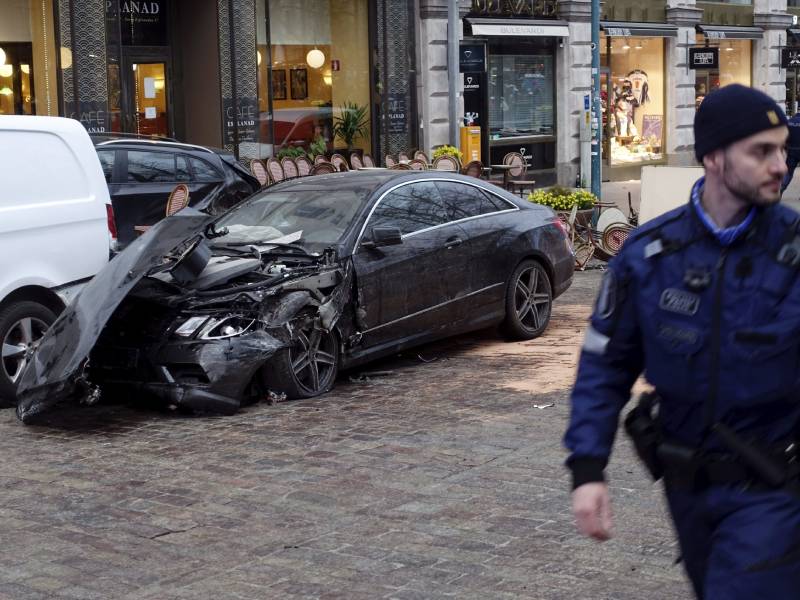 A police officer walked by the scene of a traffic accident outside Café Esplanad on Pohjoisesplanadi in Helsinki on Saturday, 30 April 2022. A 33-year-old man is tentatively suspected of offences such as causing a serious traffic hazard and driving while seriously intoxicated for driving a car into a crowd on the busy street. (Teemu Salonen – Lehtikuva)

A 33-YEAR-OLD MAN is suspected of causing a serious traffic hazard, driving while seriously intoxicated, negligent bodily injury, resistance to a public official and contumacy to the police over an incident that left three people injured and several cars damaged in downtown Helsinki on Saturday.

The events began at around 7pm as the man failed to comply with a police stop signal on Pohjoisranta, according to Helsinki Police Department.

The motorist instead continued south toward Pohjoisesplanadi, which was crowded with people celebrating Vappu. Police opted not to chase him. He caused damage to several cars before driving into another car close to the west end of the road, inflicting injuries to three people including himself.

All the injured were taken to hospital for treatment, but the injured victims have since been discharged from hospital.

Kalle de Silva Gonçalves, the detective chief inspector in charge of the pre-trial investigation at Helsinki Police Department, said police have collected plenty of video footage and eyewitness statements from the scene of the incident.

“We are also continuing to interview the victims and witnesses,” he said.

Police will not provide further details on the incident for the time being.

Helsingin Sanomat on Sunday wrote that eyewitnesses said the man was driving a Mercedes Benz, which ultimately came to a stop in front of Café Esplanad. Information obtained by the newspaper indicates that the car is owned by a man who works in the central government and ran unsuccessfully in the county elections organised in January.

The newspaper was unable to confirm reports that the car was driven by its owner.