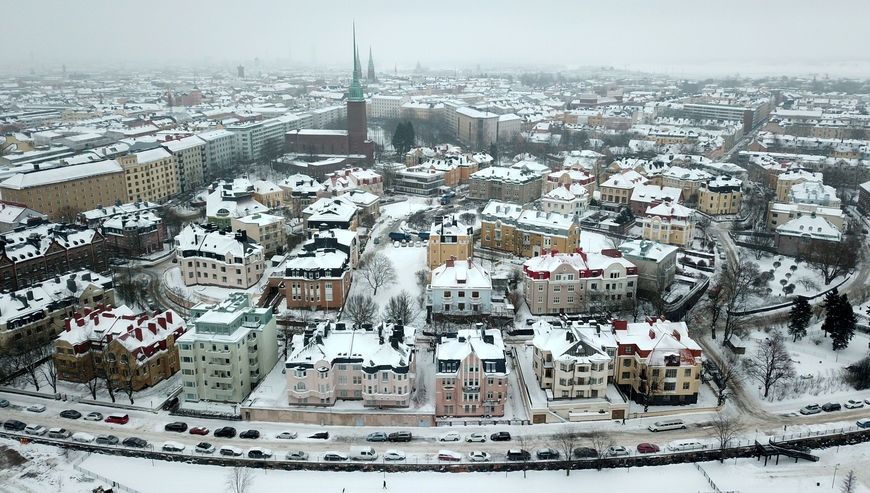 Apartments in central Helsinki, where an average salary over over $4600 a month is needed to afford a one-bedroom apartment (Image: Lehtikuva)

THIS WEEK IT WAS REVEALED that the scale of undocumented refugees and asylum seekers in Finland is much greater than anyone anticipated. Recent reports have shown that as many as half of the 30,000 asylum seekers that entered Finland at the height of the refugee crisis may have “slipped underground”, with authorities having little to no details on their whereabouts or wellbeing.

This has been attributed to Finland’s notoriously strict laws on seeking asylum and gaining legal residency in the country.

In other news, outlets such as the BBC and Huffington Post have praised Finland’s approach to solving homelessness, with the British city of Manchester trialling the same tactics to great success. It was also revealed that rents in Helsinki are so high that an average earner must make 4,650 USD a month to afford a single-person apartment, placing the city firmly above famously expensive cities like Dubai, Vienna, and Toronto in terms of living costs.

Hipster bible Broadly also travelled to Helsinki to review the “genderless clothing” department at Stockmann, while it has also been revealed that Finland was one of the only countries in Europe to not violate net neutrality laws.

The large number of "paperless migrants" has caught the authorities and the government unawares, Finland's national broadcaster admitted. Recent research has attributed this to an unsuccessful combination of tougher immigration laws and failure to execute them.

Up to 15,000 of the over 30,000 asylum seekers who arrived in Finland at the height of the migrant crisis could have wound up as undocumented immigrants at some point in the asylum procedure, researchers Talvikki Ahonen and Annastiina Kallius have claimed.

Ahonen and Kallius also estimate that thousands of people may already have left the country totally unbeknownst to the authorities. According to their estimate, the number of undocumented residents, including rejected asylum seekers who despite the efforts of authorities remain in the country and are to be forcefully removed, still hovers at around several thousand.

Original article was published in Sputnik on 30/01/2019 and can be found here.

Across 50 major cities, residents need to earn between $1,800 to $13,800 a month to comfortably rent a single-person apartment. There are many ways to determine the world's priciest city. Many urban residents are willing to put up with these high costs of living in exchange for job opportunities, cultural amenities, diversity, and nightlife. But, in most cases, they'll have to contend with steep costs of rent.

Original article was published in Business Insider on 31/01/19 and can be found here.

The city with no homeless on its streets

The number of people sleeping rough in the UK has multiplied since 2010. But in Finland's capital Helsinki rough sleeping has been almost eradicated thanks to a groundbreaking scheme. What can cities in the UK learn from the Finns?

Since 2007, their government has built homeless policies on the foundations of the "Housing First" principle. Put simply, it gives rough sleepers or people who become homeless a stable and permanent home of their own as soon as possible.

Housing First's success has caught the attention of the UK government, which last year agreed to pay for pilot schemes in Greater Manchester, Merseyside, and the West Midlands.

There are already several small-scale trials being carried out in Wales, some run by The Salvation Army, others by local authorities. Those behind the schemes say the results so far have been positive.

"We can see that it works in Finland, so why can't it work here," says Neil Cornthwaite, head of operations at the homeless charity Barnabus Manchester.

Original article was published in BBC News on 31/09/19 and can be found here.

I Tried on 'Genderless' Clothes and Was Extremely Disappointed

The elevator doors open, and the first image to greet us is a Moomin. I stare at the elevator buttons, perplexed because the floor I’m looking for doesn’t seem to exist.

I’ve traveled from Copenhagen to visit Finland’s biggest department store, Stockmann, because media outlets around the world have reported that this place has an entire floor dedicated to gender-neutral clothing. Vox writes that Stockmann goes “all in on the androgynous approach” and wonders whether this “gender-free revolution” will have the rest of the world following suit. The Danish newspaper Berlingske even claims that Stockmann is “shutting down its men’s and women’s departments” to make way for “one big gender-neutral floor.”

It all sounds very progressive, which is why I’ve made the trip. But Berlingske’s claim that the traditional men’s and women’s clothing departments have closed is quickly disproved. They’re definitely still here.

Original article was published in Broadly on 28/01/2019 and can be found here.

There are only two countries in Europe - Finland and Bulgaria, where there are no violations of the network neutrality principles, according to the Report on network neutrality in Europe published by Austrian data protection NGO Epicenter Works. The analysis of the European market was carried out with the support of the Chamber of Labour, two-and-a-half years since the implementation of net neutrality legislation.

The privacy of individual users in the EU is jeopardised by violations of net neutrality. In order to be able to calculate the data use of individual applications differently, the concrete online behaviour of the users has to be monitored.

There is a lack of a consistent approach by regulators in the event of cross-border neutrality. Some national regulators even refuse to publish annual reports on network neutrality violations or adhere to the guidelines of the European umbrella organisation BEREC.

Original article was published in Telecom Paper on 30/01/2019 and can be found here.