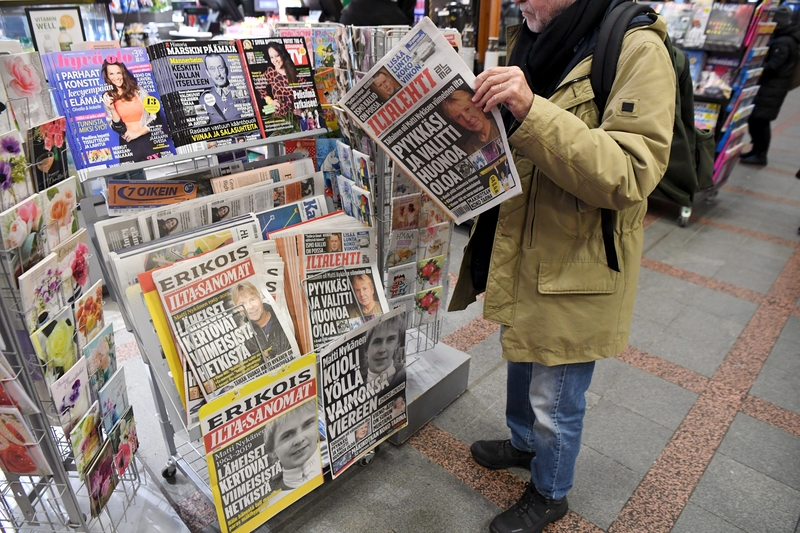 INTERNATIONAL HEADLINES WERE DOMINATED THIS WEEK with news of the passing of legendary Finnish ski jumper Matti Nykänen, as much of the country mourned following his unexpected death on Sunday evening. Tributes to the troubled and controversial athlete poured in from across the world, with the New York Times dedicating a touching obituary to him.

In other news, revelations that the Finnish immigration authority, Migri, was planning on doubling the amount to be paid to rejected asylum seekers who agree to return to their home countries also made news in several global outlets.

Following the release of figures that showed only 646 asylum seekers agreed to repatriation in 2018, Migri has raised the amount of the so-called “sweetener payment” to 5,000 euros per person.

Countries around the world have also been closely watching Finland’s universal basic income trial over the past few months, with the financial magazine Bloomberg concluding that the programme has been a failure.

Meanwhile, the UN verdict that Finland has violated the human rights of the indigenous Sami people drew widespread condemnation, while tech magazines have eagerly been commenting on the upcoming quantum computing festival in Helsinki, the largest of its type in the world.

Matti Nykanen, a Finnish ski jumper who dominated the sport in the 1980s and became a national hero, but whose legacy was tarnished by alcohol abuse and episodes of violence, has died. He was 55.

He earned his first gold medal, as well as a silver, at the 1984 Winter Olympics in Sarajevo. Four years later, at the Calgary Games in Canada, he added three more gold medals, becoming the first man in Olympic history to win both individual jumps as well as the team title.

“He was kind of a savant,” Larry Stone, a former ski jumping coach for the United States Skiing Association, told an online interviewer in 2011. “He couldn’t tell you what he was doing, but he was absolutely the best in the world.” He added: “He was a genius. Absolute genius.”

Nykanen’s illustrious career was sullied by 25 years of repeated reports of alcohol abuse and violence against his friends and wives.

Matti Ensio Nykanen was born on July 17, 1963, in the south-central Finnish city of Jyvaskyla. By his account, he was 8 years old when he began ski jumping, in response to a dare by his father. Proving to be unafraid of the dizzying heights of the ski ramps, he became obsessed with jumping.

“The only thing I wanted was to jump,” he once said, “and to jump, and to jump again.”

Original article appeared in The New York Times on 04/02/2019 and can be found here.

Starting from January, asylum seekers leaving Finland can receive up to 5,000 euros in cash or subsidies in what the Migration Service has dubbed the "cheapest option".

As the repatriation rate has dropped, Finland has decided to double its financial aid to rejected asylum seekers voluntarily leaving the country, national broadcaster Yle reported.

To obtain the maximum sum, eligible candidates must hail from the countries with the highest proportion of asylum seekers in Finland, such as Iraq, Afghanistan and Somalia. The reward for leaving the country has been raised to 5,000 euros ($5,725).

Since 2015, the peak of Europe's migrant crisis, several thousand "new arrivals" have dropped off the Finnish officials' radar. These individuals are estimated to have either stayed in the country illegally without a permit or left for another European country.

A recent report estimated that up to 8,000 rejected migrants may still be living in Finland as "undocumented people".

Between 2016 and 2018, EU member states returned 5,100 people to Finland whose asylum applications were initially rejected in Finland.

Finland’s nationwide basic income study failed to boost employment among the jobless people who received the money, according to preliminary results published in Helsinki on Friday.

The well-being of participants was higher than that of the control group, the social insurance institution Kela and the Ministry of Social Affairs and Health said in a statement. The results of the two-year study are preliminary and based on only the first year of the experiment, and no final conclusions can be drawn, the authorities said.

Original article appeared in Bloomberg on 08.02.19 and can be found here.

Finland has breached the political rights of its Sami population, the UN Human Rights Committee ruled Monday (Feb 4), charging that Helsinki had violated the indigenous people's right to "internal self-determination".

Tiina Sanila-Aikio, president of Finland's Sami parliament, and 25 other lawmakers complained to the committee in October 2015, saying Helsinki had unlawfully interfered in their people's right to decide who can participate in elections to their house of representatives.

The Sami, formerly known as Lapps, are spread out across the northern parts of Sweden, Finland and Norway and the Russian Kola peninsula, in a region known as Lapland.

According to the Finnish Sami parliament, there are 10,000 Sami in Finland. In the statement, committee chair Yuval Shany stressed that "the right to internal self-determination requires that indigenous peoples be afforded with the capacity to define group membership."

Original article appeared in Channel News Asia on 04/02/2019 and can be found here.

Video games are unlocking the mysteries of the quantum world

James Wootton is excited. He always gets excited when it comes to quantum computing or game design – but especially when he gets to do both. Next week, he’s going to do just that, all while sitting on a Ferris wheel in central Helsinki, in sub-zero mid-February temperatures. After a tour on the wheel, he’ll chuck his laptop aside and dive straight into the thick steam of a Finnish sauna.

Wootton, an IBM quantum computing physicist and programmer, will be amongst the attendees at this year’s Quantum Game Jam – a peculiar event that, on the weekend of February 16 to 17, will blend a crowd of game developers and quantum physicists with one single goal: creating video games on a 20-qubit IBM quantum computer.

They have two venues to do their programming: Helsinki’s most popular sauna with an open-air swimming pool, the Sea Allas Pool, or sitting in a pod on the Helsinki Skywheel. “Relaxing while you create games is part of the deal, that's how you get the best out of the ideas you want to create,” says one of the organisers, Annakaisa Kultima. “The wheel we use for inspiration, as long as it is not -25C on that day.” At the bottom of the wheel, in a hut, a quantum physicist will be answering the public’s questions about the weird world of quantum mechanics.