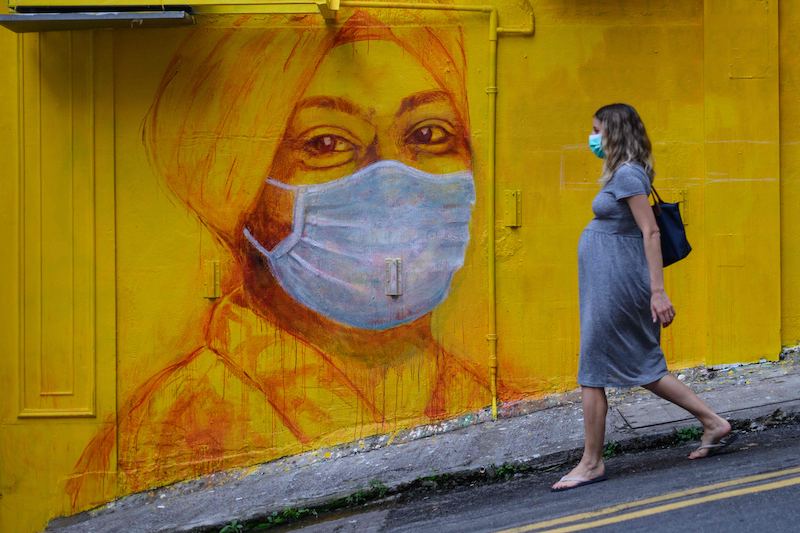 A pregnant woman dons a face mask for a walk in Hong Kong (Image: Lehtikuva)

AS THE FINNISH GOVERNMENT continues to implement new emergency measures to combat the spread of the Covid-19 virus, some vulnerable groups have been left feeling that not enough has been done to address their needs and concerns.

Government health advice has been changing daily as more information about the virus is revealed. However, there is virtually no publicly available advice or information from Finnish authorities that pertains specifically to people who are going through pregnancy. This is despite medical bodies classifying pregnant people as an “at-risk group”, amid mounting evidence that Covid-19 can be transmitted from pregnant mothers to foetuses [paywall].

Several pregnant women within the capital region reached out to the Helsinki Times to express their concerns, anxieties, and frustrations, compounded by a lack of information and a sense that they have been left out of the conversation. All of the women we spoke to for this piece have had their names changed here for privacy reasons.

Veera, who is currently in her 20th week of pregnancy, says she has received very little information from authorities or health services, with a major source of anxiety being the lack of clarity from credible sources.

“It’s very difficult to know what is going on with the virus right now. There is so much misinformation and contradictory statements from different officials on even basic things such as how the virus spreads. This is the most difficult thing for me right now. All I know is that I belong to an at-risk group”.

“I understand that we are still learning about the virus, but I have literally received no advice”.

In a similar vein, Sara, who is 33 weeks pregnant, describes herself as suffering from severe “birth anxiety” due to the ongoing pandemic, expressed concerns over an apparent lack of clear information.

“The new measures and precautions make me feel increasingly helpless, but these changes are not communicated to us. All we can do is remember to check the homepage of the clinic’s website”. When asked if she had received or seen any information or advice relating to pregnant people, Sara replied “No. I have not been informed. Even my midwife said to me that they have not received any information. I feel forgotten”.

Sara feels additionally helpless because she does not speak Finnish and, because her Finnish-speaking husband may not be permitted to be in the delivery room with her when she gives birth due to distancing measures, fears a lonely and isolated childbirth experience.

Similarly, Olivia, who is 29 weeks pregnant, says that one of her biggest fears is that she will have to “go it alone” during the “difficult and emotional” childbirth process. However, she also understands the rationale for the restrictions in place, commenting that “the restrictions are necessary, and I accept them with no major panic, fear, or dissatisfaction”.

Another impact of Covid-19 that has taken its toll on pregnant people is the strict social distancing and isolation measures that have been put in place, which have left some feeling cut off from their support networks during a time when they are particularly vulnerable.

“This feels like a punishment” remarked Sara. “I have been confined to my home for weeks. I haven’t seen anyone or been to the shops. On top of everyday isolation, I face the prospect of being alone for most of the birthing process”.

Similarly, Veera highlighted that although isolation is necessary, the loneliness combined with a lack of information from authorities has left her feeling “frustrated and scared” throughout her pregnancy.

“I don’t see my friends or family, I use a mask and disposable gloves, and I avoid public transport. However, I don’t know what I should be doing specifically as someone with child, or if I can still attend routine things like birthing therapy. It makes me very uncomfortable, but I don’t know what I can do about it”.

She also fears that the general public not following guidelines is putting herself and her unborn child at risk.

“Individuals are not behaving, people are going to bars or going on skiing trips still. Even the doctors that see me are not using gloves or masks at all.

“There is so much more we can do to slow this virus down”.

The Helsinki Times raised the issues highlighted in this piece with Oskari Heikinheimo, President of the Nordic Federation of Societies of Obstetrics and Gynaecology and Physician-in-Chief at HUS. He describes the sense of confusion as being “largely due to a shortage of knowledge” about the virus and its effects on pregnant people”. However, he reiterates that initial reports on the matter have been “reassuring” and that women in Finland should continue to monitor the daily updates on the THL website.