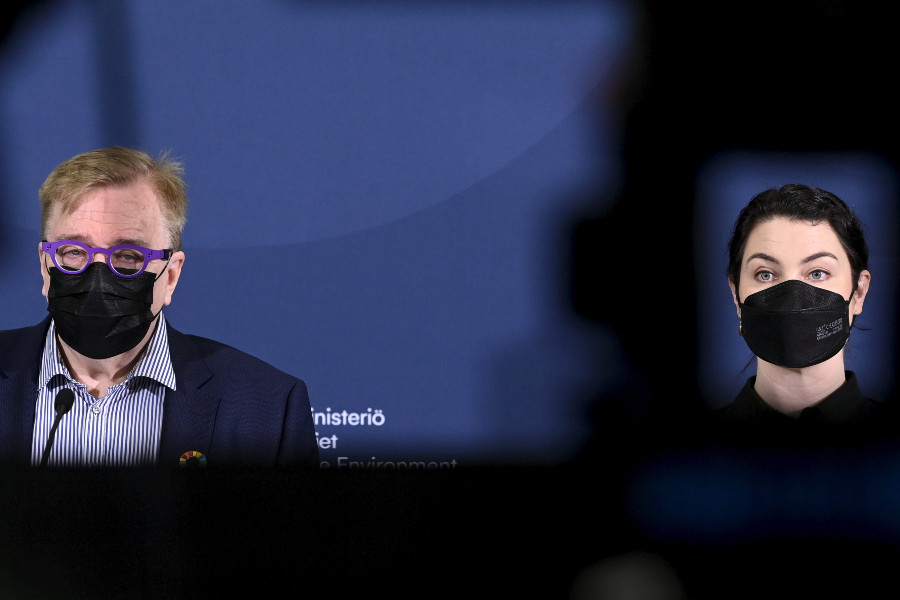 Markku Ollikainen of the Finnish Climate Change Panel and Minister of Climate Change and the Environment Emma Kari spoke about the government’s climate policy in briefing about the climate crisis and diversity loss in Helsinki on Thursday, 10 February 2022. (Heikki Saukkomaa – Lehtikuva)

THE FINNISH Climate Change Panel on Friday published its assessment of the sufficiency of the climate actions taken in effort-sharing sectors by the government.

The independent advisory panel stated that although it remains confident that the government can achieve carbon neutrality by 2035, the government should introduce or prepare to introduce measures that reduce emissions by roughly one million tonnes of carbon-dioxide equivalents to guarantee the target is met.

Significant emission reductions, it viewed, could be achieved in agriculture, transport, separately heated buildings, and energy and manufacturing facilities not covered by emissions trading.

“You should prepare to step up emission reductions by about one million tonnes through some mechanism either now or later. If the emissions don’t start declining, you could see to it through emissions trading in transport starting in 2026, for example,” Markku Ollikainen, the chairperson of the Finnish Climate Change Panel, stated to Helsingin Sanomat.

“We’re on track to become carbon neutral as far as emissions are concerned if emission trading continues and further action is taken in the effort-sharing sectors. Solutions exist both in transport and agriculture,” he said, pointing to solutions such as methane-reducing feed for livestock.

The government pledged last autumn to re-examine whether it remains on course to meet its emission reduction targets in March 2022.

Should it decide to heed the recommendation of the advisory panel, the political negotiations will likely prove challenging, as suggestions that it has already done enough have emanated from the Centre and Social Democrats. Any measures that raise energy prices in the short term would likely prove politically impossible, given the widespread debate sparked by the recent surge in fuel prices.

The Finnish Climate Change Panel also expressed its concern about the preservation of carbon sinks, highlighting that the net sink reflects market-based fluctuations in logging activity.

The emissions trading scheme for road transport is proposed as a measure that should be resorted to only if other measures fail to produce the necessary decrease in emissions, it said. While the notion is currently not tremendously popular given its expected impact on diesel and petrol prices, it could become more feasible financially as the electrification of transport continues.

Its 25-page statement will be used as a basis for the political negotiations next month.

The government has requested an assessment of the sufficiency of its measures in effort-sharing sectors also from the Finnish Environment Institute (Syke), Natural Resources Institute Finland (Luke), Finnish Meteorological Institute (FMI) and VTT Technical Research Centre of Finland.

Its efforts in sectors covered by emissions trading, such as industry and land use, will be laid down in the climate and energy strategy.

“If each sector is devising its own policies and the objectives are mutually contradictory, it results in inefficiency and the objectives being difficult to reach,” Mikko Mönkkönen, a professor of ecology at the University of Jyväskylä, said to Helsingin Sanomat.

The objectives of all three strategies, the newspaper wrote, are such that would effectively require a near complete re-think of forest use. The forest strategy would necessitate the protection of 24 per cent, the biodiversity strategy 52 per cent and the bioeconomy strategy 35 per cent of forest areas in the country – all significant increases from the current 11 per cent.

“Decisions is what we need. You can’t promote everything at the same time,” stated Jani Lukkarinen, a senior research scientist at Syke. “Difficult decisions have been avoided by making three strategies.”

“Why couldn’t we just have one nature strategy, with the economic use of forest as one of its angles. Why do we need pet strategies for each ministry that pull in different directions and shift the responsibility to land owners?”