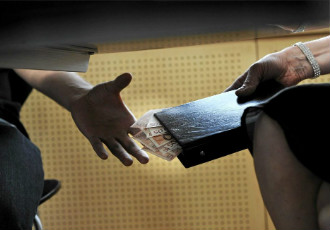 The public sector in Finland is one of the least corrupted in the world, according to Transparency International.

After topping the index in 2012, Finland has now been ranked as the third least corrupted country in the world for two years in succession, both times with a score of 89.

Elsewhere, Sweden fell from third to fourth place, while all Nordic countries were ranked among the 12 least corrupted countries in the world. The United States came in 17th and Russia 136th out of the total of 175 countries included in the 2014 Corruption Perceptions Index.

The countries at the bottom of the index were North Korea, Somalia, Sudan and Afghanistan.

One, an American advocacy group combating extreme poverty, has estimated that developing countries are deprived of at least one trillion dollars, or 760 billion euros, a year due to corruption.  Its calculations show that 3.6 million lives could be saved by investing the money involved in corruption in the provision of health care.

The efforts taken in recent decades to combat poverty are in danger of going to waste due to corruption in developing countries, One cautions.