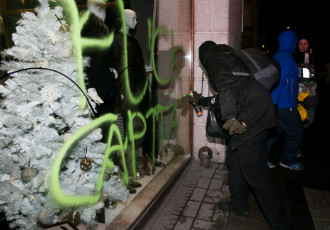 Roughly a dozen properties and several vehicles were damaged by participants in a protest organised by left-wing anarchists in downtown Helsinki on Independence Day.

Authorities have estimated that the protesters left a minimum of 100,000 euros of damage in their wake. The repair and clean-up efforts, however, may end up costing considerably more. “Walls were smeared, shop windows and car mirrors were broken, cars were walked on,” lists Petri Jehkonen, the officer in charge of the investigation.

“One steel gate was yanked open. A metro car en route from Itäkeskus to Hakaniemi was ruined to the extent that it's now out of service,” he adds.

Police officers encircled some of the protesters on Unioninkatu in an attempt to prevent them from proceeding toward the Presidential Palace. In addition, a total of 23 people were brought into custody during the demonstration.

Two of the protesters broke the window of a jewellery shop on Unioninkatu by banging a bicycle stand against it. “It was toughened glass, which doesn't break easily, so they really had to try several times,” says proprietor Annette Tillander.

She heard about the events from a security company while enjoying the Independence Day with her family. Police officers had according to the company sealed off the area from outsiders. “I saw pictures of it in the news, and it did look outrageous,” she describes.

Tillander must now pay roughly 2,500—3,000 euros and wait three weeks for a replacement window. “I was just about to decorate the window for Christmas, but now it's no use as you can't even see through [the window],” she laments.

She is also concerned that the broken window could dent her sales during the holiday season.

“It's unbelievable that something like this can happen in Finland. Hopefully, this will be the last time.”

The lifestyle boutique next door, La Matta, survived the protest with less damage. “This is a question of principles. It was no longer about expressing an opinion,” states proprietor Maria Lipasti.

The family business has operated out of the same premises already for over ten years. “I'm already used to not being able to go anywhere for May Day in case something happens. It's a shame that the Independence Day is now the same.”

In addition, the front door of Hotel Haven on Unioninkatu was damaged after a group of protesters tried to force their way into the hotel. Their entry was prevented by the security staff on duty on Saturday evening, according to Roni Saari, the manager of Hotel Haven.

On Fabianinkatu, protesters pulled off a flagpole mounted to the wall of an apartment building and broke a window of the headquarters of Metso. “What's important is that they didn't get in,” says Jussi Ollila, the head of global communications at the engineering company.

Ollila says that he is more upset over the damage caused to local business-owners. “It's somehow symptomatic that some choose to pay respect to our country in such a fashion. But maybe some simply feel so bad.”