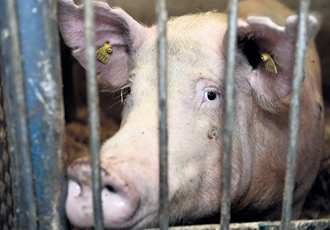 According to veterinarians and animal rights organisations, there are still serious problems with the treatment of the animals in Finnish piggeries.

UNTIL SUCH time as Finnish consumers no longer seek the lowest prices when buying pork and pork products, pigs will continue to be raised in just four square metres of space. Each consumer’s choice has an effect on the conditions in which animals are raised for meat, says veterinarian and researcher Camilla Munsterhjelm.

Many animal rights activists take the view that animals raised in captivity cannot possible have good lives. Despite that, however, legislators concentrate almost exclusively on the number of cubic centimetres of space and amount of bedding allotted to each animal.

Meat producer Atria says that it is difficult to raise the price of meat on the grounds that the animals need to feel better.

“The battle between producers in the meat section of supermarkets takes price alone into account,” says Atria’s head of quality control Taneli Tirkkonen.

How do welfare standards in Finnish piggeries compare to those in their Central European counterparts? According to a study conducted by the University of Helsinki, pigs in Finland are better off than in France, the UK, or Spain, with around half of Finnish piggeries coming in the second-best class when it comes to the welfare of the animals.

But this gives little room for self-congratulation within the Finnish pork industry, since the standard sought in the international study is staggeringly low. The highest class can include even those producers where pigs have been found with lame animals, with scars from fighting, teat infections, respiratory problems, or coughs.

Also, over half of the Finnish piggeries that were asked to participate in the study declined to take part. “So it’s likely that the pig farms with the most problems are not even included in the results of the study,” Munsterhjelm says.

Animal welfare organisations say that known problems in the pork industry have not been admitted in the study.

Uotila believes that a more accurate overview of the reality of the pork industry would be obtained by comparing conditions in Finland to those in nearby countries such as Denmark and Sweden.

The Association for Animal Disease Prevention (ETT) and the Association of Pork Producers (Sikayrittäjät) admit that there is still room for improvement in animal welfare on Finnish pig farms. Since the beginning of the year, both associations have been keeping closer track of inspections carried out by veterinarians and slaughterhouses. A piggery can at worst be dropped from the production chain if it fails to meet agreed-upon criteria.

The study provides a reminder of a problem that, researchers say, is typical to Finnish pig farms: castrations performed without painkillers or local anaesthetic. Finnish vets have only this summer been allowed to distribute pain killers to pig farmers. According to Animalia, at its most brutal pigs are castrated by ripping off the testicles, rather than cutting them off as the law requires.

Atria plans to be the first Finnish meat producer to require that painkiller be used in castration. The piggeries from which the company gets its meat have accepted the condition.