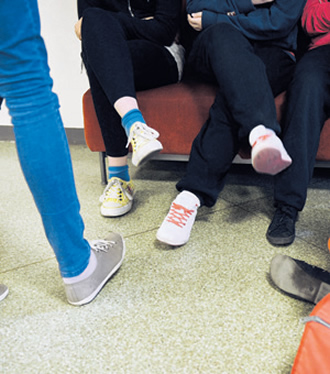 WAYS OF tackling school truancy in Finland vary greatly, with little evidence of any coherent approach to the problem. In some municipalities, kids who skip school are in effect ignored, whereas in other areas the welfare services are quick to intervene.

Programme Director Hanna Heinonen of the Central Union for Child Welfare finds the lack of a consistent approach to truancy unfortunate, and inequitable towards children and adolescents. In Heinonen’s views truancy calls for intervention, since frequent absence from school can easily lead to social exclusion.

Truancy is a matter for each school’s internal welfare group, although such informal bodies often have limited power to deal with serious problems that arise. Pirkka Aalto, a biology teacher and vice principal at Hillatie secondary school in Kemijärvi, says that there is always at least one prolonged case of truancy.

All Finnish schools now have a legal obligation to report the matter to the child welfare authorities if they believe a child’s or teenager’s situation to be in need of professional intervention. This is also the case at Hillatie school, but according to Vice Principal Aalto the child welfare authorities take an overly casual approach to the problem.

“We [in the school’s internal student welfare group] spend many hours a month struggling with situations we’re powerless to deal with,” Aalto tells.

Kemijärvi’s director of welfare and health services Auvo Kilpeläinen does not accept Aalto’s criticisms, however.

“In my view, truancy is not a child welfare problem, but the causes behind it must of course be tackled. If truancy is related to family problems or other social problems, then the matter is more serious,” Kilpeläinen says.

When faced with serious school absenteeism, one of the most drastic methods for a school is to turn to the police. According to the Trade Union of Education in Finland’s director of development Nina Lahti-
nen, in the past decade there have been about 15 to 20 cases where the police have been called upon to enforce the parents’ or guardians’ responsibilities.

Some who have studied school truancy believe that both child welfare and schools’ own student welfare groups leave plenty of room for improvement.

Pirkka Aalto and Nina Lahtinen maintain that, on occasion, child welfare authorities are too quick to resort to the legal guidelines ,according to which skipping school gives no call for considering taking children or youth into care.

“The point is not to see children taken into care, but to ensure that families as a whole get help,” Lahtinen says.

In Hanna Heinonen’s view, the need for cooperation between schools and child welfare authorities cuts both ways: the authorities would like to see schools making provisions for home schooling in cases where a child is expelled for chronic truancy.