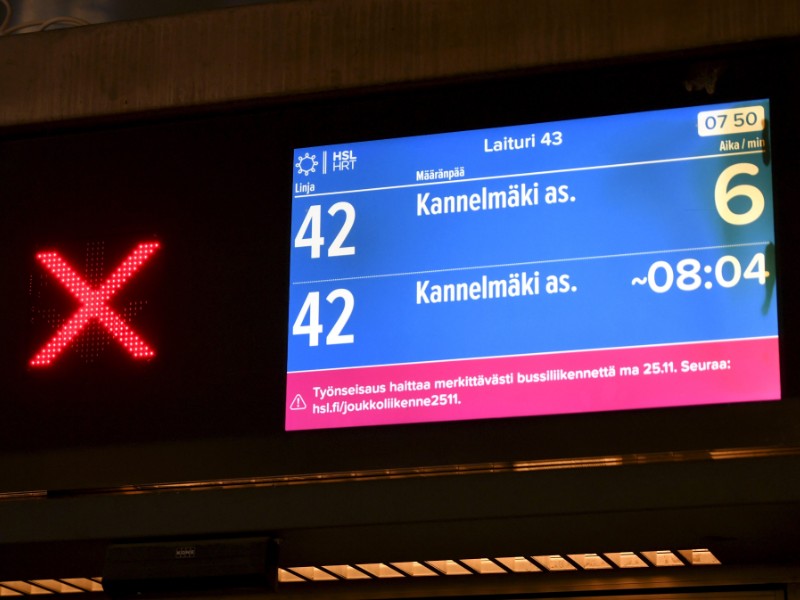 Bus services in the capital region are disrupted due to sympathy strikes launched in support of the Finnish Post and Logistics Union (PAU). (Martti Kainulainen – Lehtikuva)

NATIONAL CONCILIATOR Vuokko Piekkala on Sunday revealed her latest attempt to break the gridlock in the collective bargaining negotiations in the postal sector has failed, confirming the escalation of industrial actions by and in support of the Finnish Post and Logistics Union (PAU).

PAU and Service Sector Employers (Palta) have been mired for months in negotiations over the terms and conditions of employees at Posti, the Finnish state-owned postal services provider.

The protracted dispute has revolved around the fate of roughly 700 parcel-sorting employees, who were transferred under the coverage of a more employer-friendly collective bargaining agreement earlier this autumn. The move would result in cuts of 30–50 per cent in the wages of the employees, according to PAU.

Also the special expert task force appointed by the government to resolve the dispute stated that its settlement proposal was accepted by Palta, PAU and Posti but rejected by Finnmedia, the representative of Posti Palvelut.

“That’s the end of our structure,” said Lasse Laatunen, a former head of labour market affairs at the Confederation of Finnish Industries (EK).

PAU on Sunday responded to the failure to reach an amicable solution by announcing it will expand its strike to affect not only mail delivery, handling, sorting and transport duties, but also clerical and sales duties at the service points of Posti in Finland as of Monday, 25 November. The strike is scheduled to last until midnight on Sunday, 22 December.

Frustration has begun to boil over also in other collective bargaining negotiations.

Trade Union Pro and Industrial Union on Sunday announced strikes in response to the collapse of their bargaining talks with the Technology Industries of Finland. Both of the strikes will begin on Monday, 9 December, and end on Wednesday, 11 December.

The Industrial Union said 35,000 of its members at 180 workplaces across the country will be participating in the strike.

“It is very regrettable that we have to resort to such harsh measures, but nothing else seems to be working. We had to break off our negotiations in the technology industry on Sunday, because the employer showed a complete lack of willingness to find an agreement,” said Riku Aalto, the chairperson of the Industrial Union.

CORRECTION: The subsidiary related to the dispute is Posti Palvelut, not Posti Kuljetus as an unedited version of this article stated.