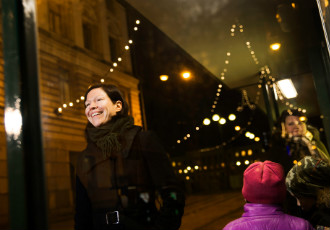 How does it feel holding an office you have been elected to largely for political reasons? “Good and exciting,” replies Anni Sinnemäki (Greens), who is scheduled to begin her tenure as the Deputy Mayor of Helsinki responsible for real estate and city planning in January.

“The selection procedure must be revised for a number of reasons, but I doubt that people would have elected someone they consider unqualified and unsuitable under these circumstances.”

Whether or not Sinnemäki was deemed qualified for the position was ultimately determined by the largest party on the Helsinki City Council, the National Coalition. Although the party decided to support Sinnemäki, it did not even attempt to justify its decision with her qualifications for the position.

“The Green League is the second largest group on the council. It's their responsibility to evaluate the qualifications of the candidate,” insisted Lasse Männistö, the chairperson of the National Coalition's council group.

Sinnemäki on 26 November won 49 of a total of 83 votes to replace Hannu Penttilä (SDP) as the Deputy Mayor responsible for real estate and city planning. Her appointment was historic as the office has been traditionally held by a male representative of the Social Democratic Party.

The candidates are as if from different worlds in several respects: Penttilä is a city official with experience specifically in land use planning, whereas Sinnemäki is a former cabinet member and party leader.

The debate that preceded the vote was unusually one-sided, with most of the councillors who took the floor expressing their concerns over the qualifications of Sinnemäki. “I hope that Penttilä's supporters aren't locked into their impression of me but keep an open mind. That's what I'll do. I'll communicate with the SDP, for example, despite the fact that they had their own candidate,” she assures.

She also estimates that the position of Deputy Mayor is more similar to that of a cabinet member than that of an expert running a department. “It's the main duty of a Deputy Mayor to ensure that the will of the council is realised,” she explains.

While the appointment of Sinnemäki stirred up a political storm, she is likely to face strong headwinds also in the future.

The City of Helsinki is currently working on major development projects in Jätkäsaari, Kalasatama and Pasila. Sinnemäki recognises that if the projects do not advance according to plan the finger will be pointed at her. “That's normal for a political office. You are responsible for projects and solving problems whenever they arise.”

Helsinki has also approved a vision for land use extending all the way to 2050, the purpose of which is to move toward a more densely populated city.

Density is a key objective also for Sinnemäki. “I want the city to grow inside Ring Road 1 in a dense and urban fashion that increases the share of public transport, cycling and walking of all journeys.”

As means to achieve that, Sinnemäki is willing to promote complementary construction and the conversion of inbound traffic lanes into boulevards. She is also willing to squeeze more residential units into industrial areas.

“Setting up mines in Helsinki is out of the question, but there's room for pretty much anything else,” she views. “However, it's worth keeping an open mind and considering whether the current industrial sites make the most sense or whether their density could be increased even to some extent.”

The Deputy Mayor-elect is also willing to build Helsinki upwards as long as it makes sense in the big picture. “Six-storey blocks can be very dense. I have nothing against skyscrapers, but building a skyscraper surrounded by unused land isn't particularly good for density.”

Sinnemäki, who will remain in office until 2017, hopes that the distribution of mayoral positions will in the future be decided by an openly political election. “It would be fair and appropriate. The political negotiations regarding that are still ongoing, though.”

If the reform is introduced, will you be the mayoral candidate for the Green League?

Sinnemäki considers the question in silence before bursting into laughter. “I have no answer. I intend to take care of these duties. I'm not thinking any further ahead at this point,” she says.