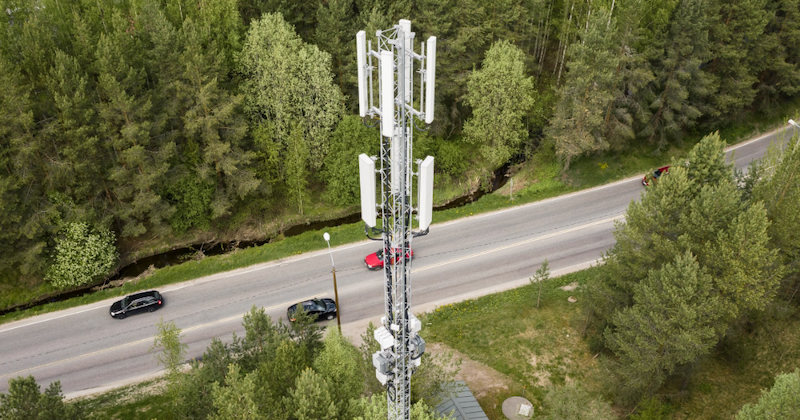 Finnish operators apply for a total of EUR 61.5 million in funding from the European Commission under the Connecting Europe Facility (CEF) for five communications projects. On 2 February 2023, the Ministerial Finance Committee endorsed the applications.

In this round of applications, there is EUR 277 million in EU funding available for high capacity backbone networks and for 5G infrastructure for transport routes and local public services.

Minister of Finance Annika Saarikko (Centre) gave a speech as the ruling party kicked off its election campaign in Helsinki on 27 January 2023. The Centre was the choice of 10.1 per cent of people responding to the latest opinion poll commissioned by YLE. (Seppo Samuli – Lehtikuva)

THE RACE BETWEEN the National Coalition, Social Democrats and Finns Party for the right to take the first stab at forming a ruling coalition is heating up with two months left until the parliamentary elections.

YLE on Thursday reported that its latest poll reveals that the three parties are separated only by 3.2 percentage points, with the two opposition parties losing and the ruling party gaining support.

Support for the National Coalition and Finns Party has fallen by 1.4 points and 0.9 points since the previous poll to 21.6 and 18.4 per cent, respectively. With the Social Democrats seeing its popularity creep up by 0.3 points to 19.1 per cent, the order of the three most popular parties has returned to what it was for most of last year. 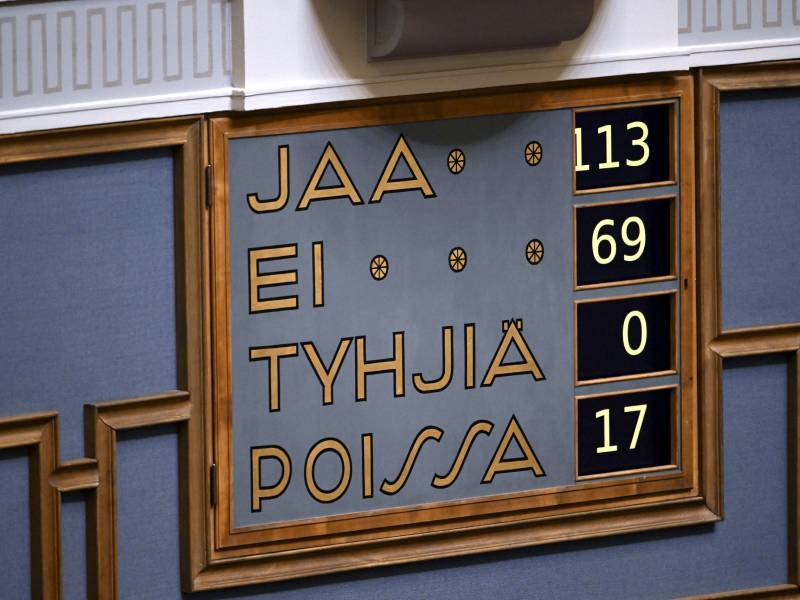 An electronic board displaying vote results in the session hall of the Finnish Parliament on Wednesday, 1 February 2023. Members of the Parliament voted 113 for and 69 against a bill that will grant adults the right to change their legal gender market with an application without requiring a supporting statement from a physician. (Markku Ulander – Lehtikuva)

MEMBERS of the Finnish Parliament on Wednesday passed the new trans act by a vote of 113 for and 69 against.

The bill received the support of all lawmakers in attendance representing the Green League, Left Alliance, Social Democrats and Swedish People’s Party. Members of the Christian Democrats and Finns Party contrastively voted uniformly against the bill. 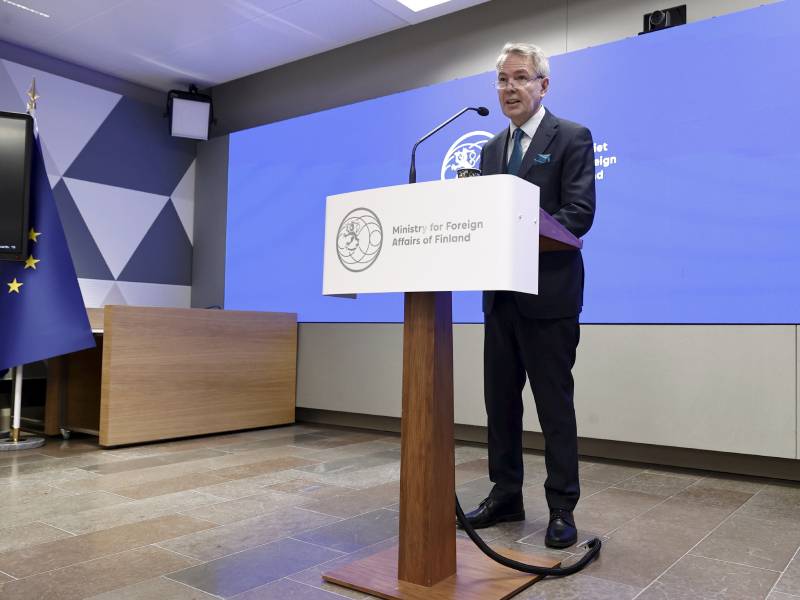 Minister for Foreign Affairs Pekka Haavisto (Greens) spoke to reporters in Helsinki on Monday, 30 January 2023. Haavisto reminded that Finland and Sweden joining Nato at the same time is important for both the military alliance’s defence plan and security in the Baltic Sea. (Antti Hämäläinen – Lehtikuva)

FINLAND has the patience to wait for its accession to Nato in part due to the security guarantees it received from several countries at the beginning of what has become an almost nine-month process, says Minister for Foreign Affairs Pekka Haavisto (Greens).

“We still hope that we’ll be members by the summit in Vilnius [Lithuania in July], even though we can’t influence decision-making in Hungary or Turkey,” he stated to reporters in Helsinki on Monday.

A commercial forest in Sulkava, Southern Savonia, in August 2021. Around 4,000 Thai came to Finland to pick wild berries in 2022. (Roni Rekomaa – Lehtikuva)

THE MINISTRY for Foreign Affairs on Thursday revealed the issuance of visas for wild berry pickers has been suspended indefinitely at the Finnish Embassy in Bangkok, Thailand.

The decision was made on grounds of numerous ambiguities related to wild-berry picking, including the extent of unreliable information in visa applications, risk of human trafficking, ongoing criminal investigation and possible revisions to the status of berry pickers.

The Covid-19 pandemic and the current crisis have demonstrated that the government's ability to support the economy is crucial. Given the persistent deficit in public finances, the new government term should start with a credible fiscal adjustment plan. The tightening of EU-wide climate policy will also affect Finland.

The war on Ukraine created an energy crisis in Europe, which has also pushed up the overall price level. Because of these developments, the forecast for economic growth in Finland for 2022-23 has been revised down significantly.

This year, airport company Finavia will invest more than EUR 15 million in the renovation of runways at Helsinki, Kuopio and Kuusamo Airports. Some of the money will be spent on water protection and energy efficiency. Sustainable development projects are also underway at several airports. In total, environmental investments will rise to nearly EUR 10 million.

"In the runway renovation projects, our goal is to improve the smoothness and safety of air traffic, and to improve water protection and save electricity. 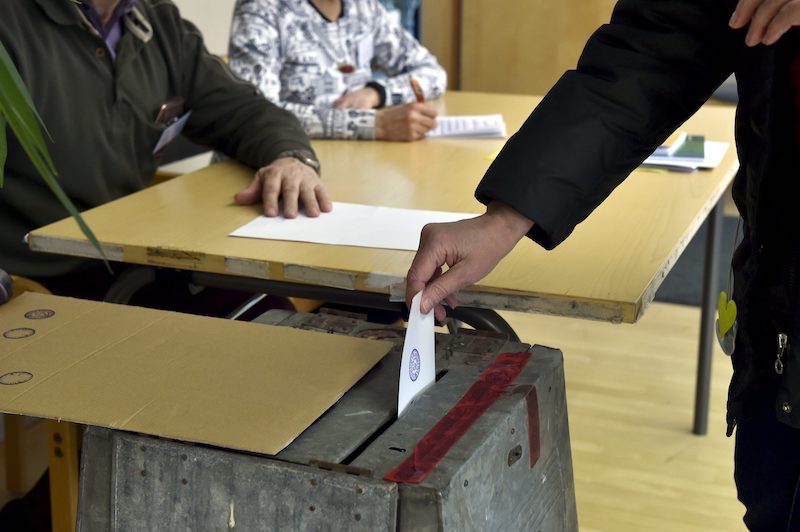 A voter casts his vote at the Mäntsälä town hall during the parliamentary elections of Finland. LEHTIKUVA

"All eligible voters who use Suomi.fi Messages will receive a notification of their right to vote in the general elections in electronic form instead of receiving it in mail. 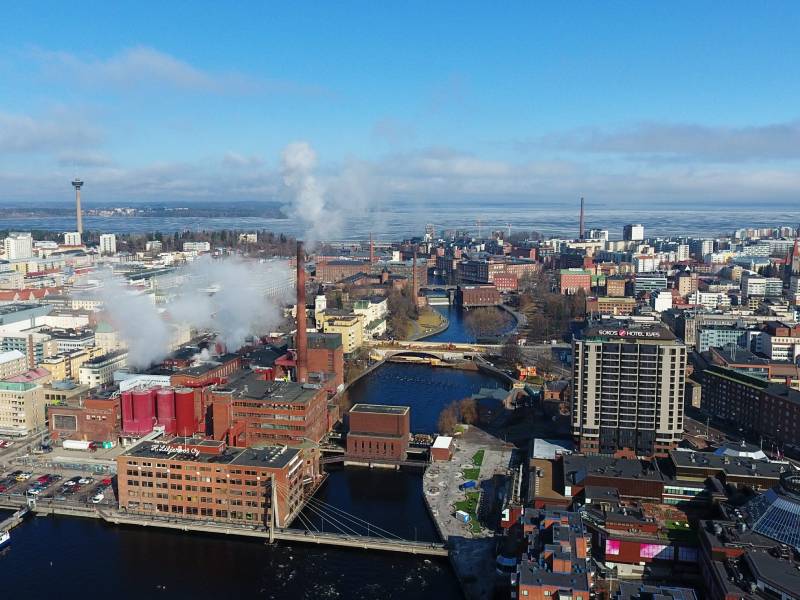 An aerial photo of downtown Tampere in April 2018. The City of Tampere says its population should rise above 300,000 by the end of 2040. (Vesa Moilanen – Lehtikuva)

Johanna Ahlgrén-Holappa, the head of information services at the City of Tampere, on Friday said in a press release that if immigration to the regional population centre continued at the same level, population growth could outpace projections in the 2020s. 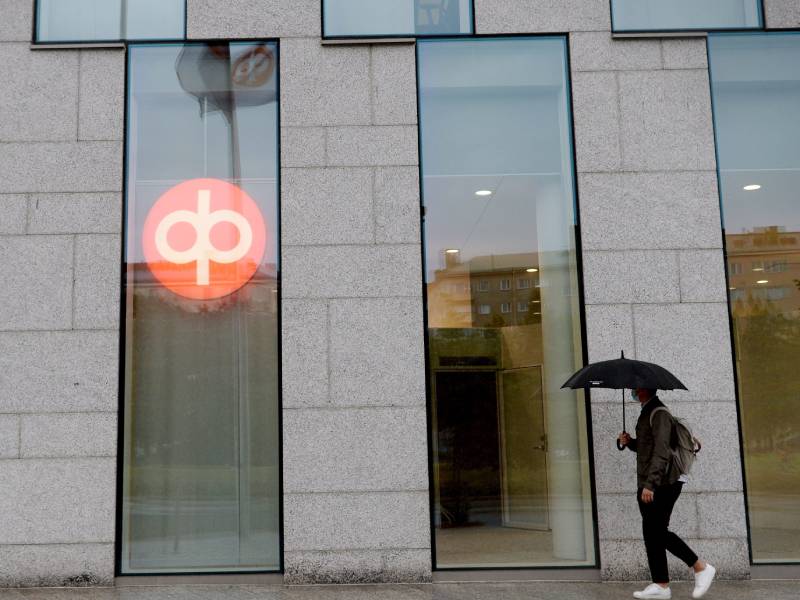 A pedestrian outside the head office of OP Financial Group in Helsinki in July 2021. The Finnish financial group is forecasting that the national economy will contract by half a per cent in 2023, affecting various segments of the economy from exports and investments to private consumption. (Mikko Stig – Lehtikuva)

THE FINNISH ECONOMY will slide into a recession this year despite the alleviation of concerns about the energy crisis, predicts OP Financial Group.

The Finnish financial group revealed yesterday that it expects the national economy to contract by half a per cent in 2023 and grow by half a per cent in 2024. Although the forecast has only undergone minor tweaks since last summer, it should not be read as an indication that the economic outlook is clear, told Reijo Heiskanen, the chief economist at OP. 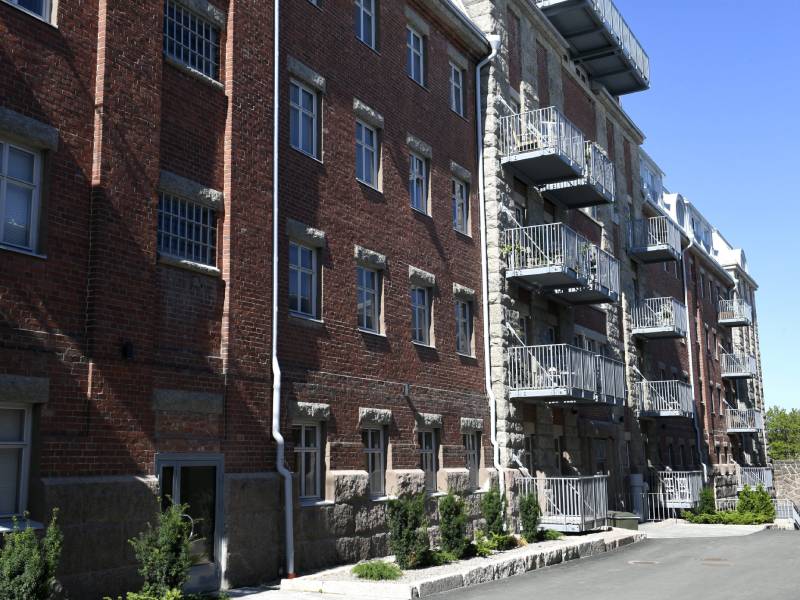 A block of flats in Kakola, Turku, in July 2019. In December 2022, the number of sales brokered by real estate agencies was almost 40 per cent lower than one year earlier, indicates preliminary data from Statistics Finland. (Martti Kainulainen – Lehtikuva)

HOUSE PRICES in Finland fell significantly at the end of last year, according to preliminary data released by Statistics Finland.

The data indicates that the prices of old dwellings in housing companies declined by 2.5 per cent year-on-year and 0.2 per cent month-on-month in December 2022, translating to a year-on-year decline of three per cent for the period between October and December.

Pupils in a classroom in Ylöjärvi, Pirkanmaa, on 18 February 2022. A doctoral researcher has found that children are often assigned to Finnish-as-a-second-language groups based on their native language rather actual language skills, reports Helsingin Sanomat. (Kalle Parkkinen – Lehtikuva)

A FIFTH OF CHILDREN studying Finnish as a second language such proficient readers that they could study it with native speakers, reveals a study by Lauri Ståhlberg, a doctoral researcher at the University of Helsinki.

Helsingin Sanomat wrote about the study, which is to be released during the course of the spring, on Friday.

Prime Minister Sanna Marin (SDP) attended a plenary session in the Parliament House on 24 January 2023. Marin on Wednesday indicated that the much-discussed proposal to appoint a new security policy advisor for the prime minister will likely be shelved until the next government has taken office. (Mikko Stig – Str / Lehtikuva)

PRIME MINISTER Sanna Marin (SDP) on Wednesday said it is likely that the appointment of a new much-discussed security policy advisor for the prime minister will be postponed.

The office of the prime minister has been preparing to set up the advisory position, but the notion has come under heavy criticism from the office of the president, the Ministry for Foreign Affairs and Defence Command of the Finnish Defence Forces.

A customer putting rye bread into a shopping basket in K-Citymarket Ruokolahti in Helsinki on 22 May 2022. Supermarkets across Finland may be affected this month by a series of strikes planned by Service Union United (PAM). (Saara Peltola – Lehtikuva)

THE FINNISH Commerce Federation has taken action in response to the strike threats issued by Service Union United (PAM).

The Commerce Federation on Tuesday announced it has decided to stop deducting union membership fees from wages and disbursing them to the trade union starting on 15 February, citing the fact that the fees are used to finance the “massive wave of strikes” looming over the retail sector.

The Finnish Climate Fund has decided on a capital loan of at most 10 million euros to rotor sail manufacturer Norsepower for increasing its production capacity. Norsepower's products save significant amounts of fuel and can enable emissions reductions measured in the millions of carbon dioxide tonnes during the next decade.

Shipping emissions are a major climate challenge. Approximately 2.5% of global annual greenhouse gas emissions are generated by shipping, and shipping accounts for 13.5% of the EU's total GHG emissions.