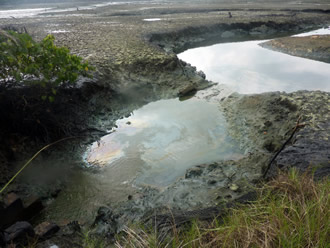 Goi is gone, given over to nature.

Residents of the former fishing and farming community of 3,000 in the Ogoni region of southeast Nigeria, fed up with the third and largest oil spill in five years due to sabotage of pipelines, packed up and left the village in 2009-2010.

"We had to move because if we caught fish and opened it up, we found oil; if we harvested cassava, we found it soaked with crude," Eric Dooh said under the shade of wild date palms by his abandoned tin-roof home. "Our well where we got water became contaminated with crude and we decided to seal it up."

The 45-year-old teacher spoke against the backdrop of a blackened swamp, the fouled Goi River ebbing by reflecting an oily sheen, the odor of raw crude omnipresent. What remains of Goi is the legacy of the Niger delta, heartland of the oil industry that supplies four-fifths of Nigeria's state revenue and is now soiled by spills, sabotage and contaminated waters.

About 240,000 barrels of crude, close to what spilled in 1989 when the Exxon Valdez tanker ran aground off Alaska, leaks on average each year where some of Earth's most lucrative oil deposits exist. Spills, gas-flaring and discharges are ruining Niger delta waters with oil and cancer-causing chemicals, according to a study in the Journal of the Nigerian Medical Association.

For delta inhabitants of Africa's most populous nation and the continent's second-biggest economy, the bad waters put health and livelihoods at risk, drawing scant attention from a government battling a four-year-old insurgency by Islamist militants wracking northeast Nigeria while planning for elections next year.

Goi's collapse as a community is the latest chapter in a checkered Niger delta history where European merchants engaged in the slave trade in the 15th century. Bonny, on Nigeria's coast, served as an export terminal for human cargo that flowed down the region's rivers. By the 19th century, the area was named "Oil Rivers" for its palm oil.

Inhabited mainly by ethnic minorities including the Ijaw, the area was first explored for oil by Royal Dutch Shell in 1939 after the company was granted the concession for all of Nigeria while it was still a British colony. Exports began in 1958, oil majors including Exxon Mobil, Chevron, Eni and Total soon followed, and remain.

Competition for the financial benefits of being an oil community has sparked conflict among the delta's ethnic mix, fomenting unrest in a region now suffering from kidnappings, pipeline sabotage, piracy and crude theft.

Today, visitors to Goi are warned off with signs from the Hydrocarbon Pollution Restoration Project of the Federal Ministry of Petroleum Resources that declare in red and white: "Prohibition! Contaminated Area, Please Keep Off."

Once-rich alluvial soils of the delta are often no longer viable for crops as more than a half-century of oil production and related damage continue to take a toll.

In Dooh's case, he inherited a bakery, poultry and three fish ponds from his father yet left with the rest of the village when spills tainted everything from drinking supplies to food. What irritates Goi residents is that no one received compensation for the loss of homes and community.

That's in part because Nigeria, Africa's biggest oil producer, is a land of 170 million residents with at least 1,500 communities in an uneasy alliance with energy titans.

A first glimpse of the 70,000-square-kilometer (27,000- square-mile) delta shows a verdant area the size of Scotland southeast of Lagos and fed by the Niger River that flows from the Guinea Highlands.

Within the delta, about 5,280 oil wells are linked by 7,000 kilometers (2,700 miles) of pipelines. About 80 percent are owned by Shell, which operates most of the onshore fields in Nigeria.

Shell estimates oil leaks due to theft and sabotage in its Nigeria operations have risen from about half in 2008 to at least 80 percent. Competitors in Nigeria report similar figures relative to the size of their operations, with those at offshore fields less common than on land.

The amount of spoiled water has grown with discoveries of cadmium, lead, chromium and nickel in dozens of delta rivers above "maximum contaminant levels" set by the US Environmental Protection Agency, according to a 2010 study by the Environmental Chemistry and Toxicology Research Unit of the Nnamdi Azikiwe University in the southern city of Awka.

A report in 2011 by the United Nations Environment Programme found measurements of the carcinogen benzene in water wells surpassed World Health Organization recommendations.

Though Goi has no oil wells, it's in a mangrove-studded plain 40 kilometers (25 miles) from Nigeria's oil industry capital, Port Harcourt, between Shell's Bodo East and Bodo West oilfields.

While Shell stopped production in the region in 1993 after violent protests, its trunk lines supplying the Bonny Export Terminal on the coast from outlying fields still pass through the area. The pipelines are frequent targets for oil thieves.

Attacks by militants campaigning for a greater share of the delta's wealth cut 28 percent of Nigeria's output from 2006 to 2008, according to data compiled by Bloomberg.

Though production recovered after fighters accepted a government amnesty and disarmed, it hit a four-year low in 2013 when former combatants returned to gangs tapping crude from pipelines for local refining or sale to vessels off shore, taking an estimated 100,000 barrels daily.

While regulations governing the oil industry in Nigeria require energy companies to clean spills and pay compensation to affected communities, exceptions are made for those blamed on sabotage.

The share of such pipeline ruptures has increased from about a third 20 years ago to two-thirds now, according to Petroleum Ministry data, sparking disputes with communities and leaving scores of spill sites including at Goi uncleaned.

Shell said its cleanup efforts have been stopped by locals in Goi who insist they be paid compensation first.

"Attempts to visit the site and begin cleanup work in late 2011 and in the first half of 2012 were unsuccessful because the local community refused to grant 'freedom to operate' for cleanup teams," Jonathan French, Shell's spokesman in London, said Feb. 14 in an email. "Without the consent of local communities, we cannot do the required work."

Exxon Mobil, Total and state-owned NNPC didn't respond to requests by e3mail and phone for comment.

South of the Ogoni area on the coast, communities are seeing increasing intrusion of seawater into freshwater sources used for drinking, according to the Nigerian Hydrological Services Agency, a unit of the Water Resources Ministry. Drilling deeper for potable water has yielded saltier water.

Inhabitants of the affected areas, who are resorting to harvesting rainwater, are at risk of contaminants as well from hundreds of gas flares that fill the atmosphere, leaving them only the option of "purchasing water from merchants coming from the hinterland in boats," the agency said in a statement.

The agency, set up in 2010 to address Nigeria's water quality, plans a new survey of the delta to update the impact of oil operations and create "an early warning system" on water- contamination risks.

Chevron, commenting on how it deals with water-quality threats, said by e-mail all its operations in Nigeria "are done with a strong commitment to protecting people and the environment."

Eni said in a Feb. 21 email that its Nigeria Agip Oil Co. unit takes appropriate measures to ensure quality of water in case of spills including immediate containment, prompt cleanup and follow-up inspections.

In Goi, as in many places impacted by spills blamed on sabotage, inhabitants are demanding compensation before any cleanup, according to Dooh.

Not satisfied with Nigerian law, Dooh joined three farmers with the support of the environmental group Friends of the Earth and filed a lawsuit in 2008 against Shell at The Hague.

The court held Shell liable last year in the case of one of the farmers and dismissed the others, including Dooh's, on the grounds that Nigerian law doesn't hold oil companies responsible for spills caused by sabotage.

Dooh has returned to local courts in search of compensation. He's awaiting a ruling.

— With assistance from Elisha Bala-Gbogbo in Abuja, Nigeria.