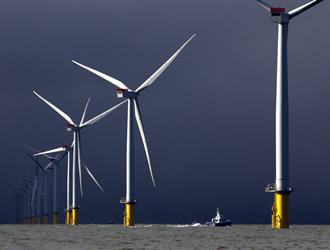 Birds, sharks and unexploded bombs from World War II are being blamed for holding up offshore wind farms in Europe, raising doubts about the costs of the technology.

Three utilities last week scrapped an expansion of the world's biggest offshore wind farm in the Thames estuary, east of London. That capped three months when each of the six largest British utilities retreated from marine energy projects.

While developer EON highlighted concerns about disrupting the wintering grounds of the red-throated diver, the broader threat to the industry is its failure to bring down costs quickly enough in nations that are increasingly concerned about the price of electricity.

"It's either the cost because of the technical challenges or the environmental issues" that's thwarting projects, Keith Anderson, chief executive officer of Iberdrola's ScottishPower Renewables unit, said in an interview. "There's a bit of realism that unless we can deliver these projects for a lower price, then it's unrealistic to expect to continue to get political and government support."

The British market is crucial to the industry because it's the biggest source of new projects and accounts for more than half the global installed capacity. Prime Minister David Cameron's government has set incentives for offshore wind through 2019, hoping to stimulate clean-energy jobs.

Those ambitions are being chipped away as developers better understand the costs of the projects. Utilities have canceled as much as 5,760 megawatts of planned capacity since Nov. 26, when RWE dropped its 1,200 megawatt Atlantic Array.

About 6,930 megawatts of machines are working worldwide now with 3,689 megawatts of them in Britain, according to Bloomberg New Energy Finance. A thousand megawatts is almost as much as a nuclear reactor produces.

EON, a German utility, along with Dong Energy and Masdar Abu Dhabi Future Energy Co. Wednesday abandoned plans to expand the 630-megawatt London Array by as much as 240 megawatts. EON said it couldn't guarantee progress even if it met requirements for a three-year study of impact on red- throated divers, a fish-eating bird that can swim more than a minute under water.

The British government has set the industry a goal of reducing its costs to 100 pounds a megawatt-hour by 2020. New Energy Finance estimates it's currently as high as 147 pounds, and is unlikely to meet the target.

"It's probably not manageable," said Sophia von Waldow, a BNEF analyst. A cost of just under 110 pounds may be possible by then, she said.Dong, the biggest offshore wind developer, may be able to cut costs to 100 euros a megawatt-hour in 2020, according to Benj Sykes, who heads the Danish utility's British wind unit.

"Cost reductions are essential," said Aris Karcanias, London-based Managing Director of Renewable Energy at FTI Consulting. "It's still a nascent technology that has a price curve to go along."

That's the theme also for Danish Climate Minister Martin Lidegaard, who said in an interview that policymakers need to "create a legal framework that will drive innovation and bring costs down," and for U.S. Energy Secretary Ernest Moniz who said in January that "offshore wind remains for us expensive." The United States has no offshore wind farms.

In Britain, Forewind, a consortium that includes SSE, and a venture including Electricite de France downsized projects this month. RWE canceled one plan and shrunk another in the past three months, while ScottishPower in December cited basking sharks among reasons for scrapping a project.

The British government says offshore wind ambitions remain on track, though the Department of Energy and Climate Change cut its forecast in December. It expects about 10 gigawatts of capacity by 2020, down from a 2011 prediction of 18 gigawatts.

"It is perfectly normal for developers to adjust their plans as they progress," the energy department said in an emailed statement. "This government is committed to a thriving offshore wind sector."

"Big German companies have lost their cash-cows, because Angela Merkel said they have to close down their nuclear power stations," Stamer said. "That's where they earned their money that they could then go off and invest in offshore wind." He said even reaching 6.5 gigawatts will "take a lot of work."

Old munitions have also slowed the industry in Germany and Britain. TenneT TSO two years ago detected several World War II mines as it prepared to lay cables linking the EWE's Riffgat project to the grid. The link was completed last week.

New projects tend to be further from shore and in deeper waters. That means costs are rising, and utilities can no longer afford to shoulder the cost of projects themselves, said Ben Warren, an environmental finance partner at Ernst & Young.

"The utilities' balance sheets haven't substantially improved in the last couple of years to enable them to afford to do billion-dollar projects," he said.

The tougher conditions further out at sea mean "everything becomes logistically more challenging in terms of costs and times," according to RWE's Cowling. "You basically need to have offshore hotels out at sea that can enable these things to be built," he said.

Companies are trying to bring down costs in all areas of the industry. More powerful turbines being tested by manufacturers such as Vestas Wind Systems A/S and Siemens AG mean fewer foundations are needed. RWE and Dong have commissioned specialised vessels to help install turbines, and industry groups evaluating the costs of cabling, servicing and ports.

ScottishPower's Anderson said his company is focusing on easier projects, such as a collaboration with Vattenfall off East Anglia that could eventually reach 7,200 megawatts.

Alex Morales – Bloomberg News — With assistance from Louise Downing in London and Stefan Nicola in Berlin.