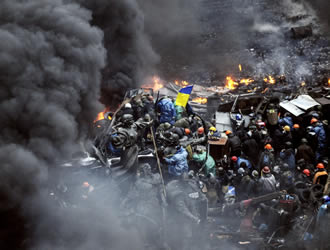 As the bloodiest day in Ukraine's long-running crisis drew to a close with protesters unbowed, President Viktor Yanukovych told European foreign ministers on 20 February that he would be open to early elections if that would restore peace.

One of those ministers tweeted that the mood in the presidential offices when he arrived — with detonations occurring nearby and black smoke swirling in the air outside — was "panicky."

With an official death toll for the day of 75 and several dozen Interior Ministry troops captured by protesters after a truce Wednesday night lasted only a few hours, shocked members of Yanukovych's Party of Regions began deserting him during a hastily called extraordinary session of parliament. They joined with others in passing a resolution calling on the police to pull back and not to use firearms.

A bigger desertion may be taking place in Moscow. President Vladimir Putin, who has steadfastly tried to bind Ukraine and Yanukovych to Russia with economic ties, talked with European leaders about the need to work with them and the United States to find a resolution to Ukraine's unraveling.

This was an abrupt change in tone from the fault-finding that has characterised Russian and Western dialogues on Ukraine. If Putin follows up — which is not at all certain — it would spell tremendous difficulty for Yanukovych.

In Kiev, there was no triumphalism on the Maidan, as Independence Square — the protest movement's epicenter — is called. Rather, there was deep dismay over the bloodshed. Hotel lobbies were turned into emergency rooms and morgues. Soot-stained, exhausted protesters tended to the wounded, said farewell to the dead, assiduously dug up more paving stones for use as missiles and showed no signs of debilitating fear.

Medics said it was clear that a number of those killed had been targeted by snipers. At least two were older than 50, according to a partial list of victims. Videos showed police using automatic weapons, and at least one protester was photographed aiming a rifle. Molotov cocktails were employed, as they had been previously.

At one tent on the Maidan, volunteers had collected hundreds of bottles, as if on a recycling drive. But they were to be filled with gasoline for use as weapons.

"A horrible tragedy has been happening on the streets in Kiev and other cities of Ukraine," Valeria Lutkovska, human rights commissioner of the Ukrainian parliament, said in a statement on the afternoon of 20 February.

Russian analysts said Thursday that the Ukrainian president has shown he cannot defeat the opposition and that the past two days of street fighting, coupled with defiance throughout western Ukraine, have exposed his weakness. If that thinking now extends to the Kremlin, Putin might try to cut the best deal he can.

The Kremlin also announced that Putin was sending the well-regarded presidential ombudsman, Vladimir Lukin, to Ukraine to offer his services as a mediator.

The resolution passed by the parliament, or Verkhovna Rada, won't take effect without the signatures of the speaker, who was absent, and Yanukovych. But it is a significant sign of growing disenchantment within the president's own ranks. Those who deserted him are seen as having ties to various business oligarchs who have been Yanukovych's lukewarm allies up to now.

The resolution is likely to be challenged on the grounds that there wasn't a proper quorum, because many of Yanukovych's remaining loyalists stayed away. Geoffrey Pyatt, the U.S. ambassador, released a video statement in which he said that members who were absent were part of the problem — not, as the saying goes, part of the solution.

Early Friday morning, Petro Poroshenko, an oligarch who unequivocally supports the protests, arranged for a busload of captured troops to be released. The crowd on the Maidan brought the bus to a halt, and Poroshenko exhorted them to let it through. Earlier, the hard-line demonstrators who took the hostages had said they would be released when the police pull back from the areas surrounding the Maidan.

The Interior Ministry acknowledged Thursday that it had issued combat-level weapons to police officers and suggested that they had the right to use them in order to recover their captured comrades. By early Friday morning, there had been no general assault on the protesters' position.

At a meeting in Brussels, European Union leaders agreed on a series of targeted sanctions against certain Ukrainian officials, one day after the United States revoked visas for 20 unidentified officials. In Washington, a White House statement on the violence in Ukraine was unusually stern.

"We are outraged by the images of Ukrainian security forces firing automatic weapons on their own people," it said. "We urge President Yanukovych to immediately withdraw his security forces from downtown Kyiv and to respect the right of peaceful protest, and we urge protesters to express themselves peacefully."

It called on the Ukrainian military not to take part in the conflict because "the use of force will not resolve the crisis."

It promised that the United States would "hold those responsible for violence accountable."

Late in the day, Vice President Joe Biden called Yanukovych. He condemned the violence against civilians in Kiev, according to a White House statement, and called on Yanukovych to pull back police, snipers, military and paramilitary units and irregular forces. The United States, he said, is prepared to sanction those officials responsible for the violence.

Yanukovych met with the foreign ministers of Poland, France and Germany. The meeting, held away from the presidential office building, lasted four hours. Then, as Radoslaw Sikorski of Poland put it, the ministers went to "test a proposed agreement" with the heads of the three main political parties opposing Yanukovych.

Afterward, as the evening grew late, the three ministers returned to the presidential offices and met with Yanukovych again. They decided to spend the night in Kiev and resume their talks Friday.

Klitschko's UDAR party said that he and the other two main opposition leaders, Arseniy Yatsenyuk of the Fatherland Party and Oleh Tiahnybok of the nationalist Svoboda party, want to join the ministers and Yanukovych in Friday's negotiations.

Word of Yanukovych's stated willingness to consider early elections was first reported by the Polish Prime Minister, Donald Tusk, in Warsaw. He said part of the plan was the formation of a transitional government within 10 days and the adoption of a new constitution by summer. The next scheduled presidential elections would be in 2015 and the next parliamentary elections in 2017.

The morning fighting, the worst in Ukraine since World War II, raised again the question of whether the hard-line militants from a nationalist group called Pravy Sektor would follow the lead of the mainstream opposition politicians if a deal could be reached. The Russian Foreign Ministry called on those politicians to repudiate the radicals.

But with at least 10 Interior Ministry troops now killed, there's also the question of whether Yanukovych is fully in control of his forces. It's not certain what set off the day's fighting, but the police are sure to want to avenge the deaths of their colleagues.