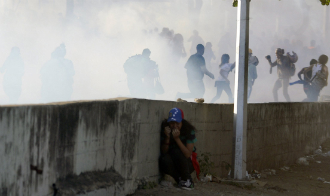 Twitter says the Venezuelan government is blocking images on its website, the latest sign of a crackdown after violent protests that killed at least three people in the past week.

Twitter users had been posting their photos of the street demonstrations, providing an alternative to state-run media. It's unclear if photos are blocked in all Internet providers in Venezuela, said Nu Wexler, Twitter spokesman.

Venezuelan President Nicolas Maduro banned street demonstrations and ordered the arrest of opposition leaders after about 50,000 Venezuelan marched through Caracas to protest shortages of basic goods, creating clashes between protesters and government supporters.

Billy Vaisberg, director of an online directory of Venezuelan Twitter users called TwVen.com, said he had received several reports from people who couldn't see images on their feeds Friday.

Maduro has accused mainstream media outlets of creating confusion. He took Colombian station NTN24 off the air and in a national address yesterday criticised Agence France Presse for "manipulating information."