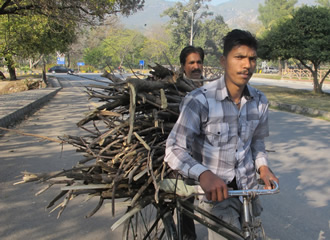 Islamabad, Pakistan — Ramesh Iqbal lives in one of the Pakistani capital's middle-class neighborhoods and attends college. But on a recent day, he and two friends emerged from a wooded area, their arms full of the logs and branches they had to gathered to warm their homes.

"We never thought we would face such a situation," said Iqbal, 24, wearing a sweater over a collared shirt. "But due to winter, and cold, we are facing problems."

In a country where about 20 percent of residents lack basic utilities, generations of poor and rural Pakistanis have relied on timber to make it through the winter. But severe energy shortages are turning even wealthier families into wood scavengers.

They snap branches, uproot saplings and hack trees, and they carry their bounty any way they can — by truck, motorcycle and even bicycle. And with each trip, Pakistan loses another piece of its tree canopy, an alarming trend for one of the world's least forested countries.

Environmentalists and government officials fear Pakistan is now at a tipping point, having retained just 2 to 5 percent of its tree cover. Officials fear the deforestation will contribute to more lethal floods, disruptive landslides, bacteria-ridden drinking water and stifling air pollution. The country may also become more vulnerable to climate change.

"This is a very dangerous situation for Pakistan," said Pervaiz Amir, a local forestry and agriculture expert. "The middle class are now cutting trees and burning trees."

But convincing the public of the value of tree cover has been a tough sell, especially this year, when electricity is out for up to 10 hours each day and the natural gas supply is often too low to power heaters and stoves.

Even in Islamabad, known as one of the greenest capitals in Asia because of the nearby Margalla Hills National Park, wooded areas and vacant lots are being slashed, leaving behind rows of twisted, yellow, ankle-high sapwood.

Under British colonial rule, Pakistan was sparsely populated and largely avoided the tree-cutting that stripped many other areas in South Asia of greenery. Pakistan had towering timber forests in the north, coniferous forests in its western hills and lush mangrove forests where its southern border meets the Indian Ocean.

But as Pakistan's population grew from about 37 million in 1947, when it was partitioned from India, to an estimated 180 million residents today, forests were rapidly depleted. When the Soviet Union invaded Afghanistan in 1979, more than 1 million Afghans fled into Pakistan, often moving into makeshift camps carved out of previously forested areas.

More recently, Pakistan has struggled to combat a relentless "timber mafia," a term that loosely defines individuals and organized groups who illegally cut and sell timber without a permit. Over the years, there have been numerous allegations that police and forestry officials have accepted kickbacks from the lucrative industry.

"In my father's times, some 70-80 years back, there were forests and tall trees on almost every hill, but now most are barren," said Muhammad Afzal Khan, a former federal minister in the scenic Swat Valley, which has been particularly hard-hit by illegal cutting. "The forest officials are part of the problem — [they are] not the protectors."

Now, the shortage of natural gas for heating and cooking is increasingly prompting people to build fires in portable fireplaces and stoves. Though Pakistan had a plentiful supply of natural gas a decade ago, a surge in demand and poor efficiency standards have led to a steady decrease in supplies in recent winters.

"This is the first time we've had to collect wood, as there was no gas crisis like this before," said Khalid Nazir, 35, a tailor in Islamabad.

Syed Mahmood Nasir, Pakistan's inspector general for forests, said he's particularly concerned that large factories in major cities such as Karachi are also burning wood for heat because of electric and gas shortages.

"This should be a concern not only for Pakistan, but a global concern," Nasir said.

Even before this year, the World Bank had estimated that just 2.1 percent of Pakistan had forest cover, compared with 23 percent in neighboring India and 33 percent in the United States. Pakistani leaders dispute that figure, saying satellite-generated data reveal a forestation rate of about 5.1 percent.

But government officials acknowledge the problem and fear deforestation is worsening the impact of extreme weather, contributing to tragedies such as the record-setting floods in 2010 that covered one-fifth of the country and killed more than 1,50o people.

Even before this winter, Pakistan was losing 67,500 acres of forestland annually, according to government statistics. Amir estimated that the country needs to plant 1.5 trillion to 2 trillion trees to begin reversing the damage, saying one acre can hold up to 2,500 saplings.

"If you look at satellites, there is no tree cover in public forests; they are all gone," said Amir, who is also a South Asia expert for the Global Water Partnership, which advocates for sustainable development and water management.

Officials say Pakistan is planting about 100 million saplings each year, but about half of them die within two years. Environmentalists are skeptical of the figures.

Raja Hasan Abbas, secretary of the federal government's Climate Change Division, said there is only so much that Pakistan's cash-starved government can do as it struggles with debt, a weak economy and near-daily terrorist attacks.

"The government of Pakistan has limitations," Abbas said.

In December, Pakistan secured a 3.8 million dollar grant from the World Bank to study the extent of deforestation and begin drafting strategies for curtailing it. Naeem Ashraf Raja, the director of Pakistan's biodiversity program, said officials also hope to convince the United States and other foreign donors to help launch programs to compensate landowners who agree not to cut trees. Currently, there is little incentive for Pakistanis to preserve green space on private land.

Azhar Javed, who has run a timber market on the outskirts of Islamabad, said demand has driven up prices by about 30 percent this year. While good for business, the price hike encourages illegal logging, and Javed is worried about the long-term sustainability of his business.

"The people who live in forest areas are uneducated, unemployed . . .so they just cut trees and cut forests," Javed said. "And they don't have money for replantation."

A 48-year-old man who was carrying dozens of branches on his head as he walked on a hillside road above Islamabad said he collects wood for several hours a day, including in the Margalla Hills National Park, and sells what he can carry for about 3.50 dollars.

"I have no job," said the man, Akhtar, who uses only one name. " And this is the only way I am earning for my four kids."