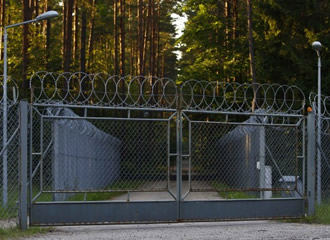 WASHINGTON — The Mihail Kogalniceanu Air Base in Romania is a short drive from the Black Sea and the port city of Constanta, a sprawling metropolis with beach resorts, museums, and nightclubs. It's also about to become the main transit point for the tens of thousands of U.S. troops flowing out of Afghanistan. It won't be the first time Washington has used the base for a sensitive mission, however: If human rights groups are correct, the facility also used to house one of the CIA's notorious "black site" detention facilities.

The spy agency's mysterious use of the base has never been fully explained. In 2005, The Washington Post first reported the United States had secret detention facilities in Eastern Europe, but decided not to identify their locations at the request of the U.S. government: http://wapo.st/1fk1wVN. The organization Human Rights Watch demanded further investigation into CIA activities on the base shortly afterward, noting that the U.S. intelligence service had landed planes on the base, commonly known as MK, and that public access to the base had been sealed off. The Romanian government denied any detention facilities were there -- but did acknowledge allowing the agency to quietly land planes on the base.

The controversy led Romania to take the unusual step of opening the base to media tours in December 2005 -- proof, it said, that there had been no secret prisons there. Still, the Associated Press reported in 2011 that there had been a secret CIA prison in Bucharest, Romania's capital, which was used to interrogate al-Qaida leaders, including Khalid Sheikh Mohammed, the alleged mastermind of the 9/11 terrorist attacks. Regardless, most Romanians regarded the controversies with indifference because of a widespread belief that aligning their country with the United States was still their best bet for security, said Dennis Deletant, a visiting professor of Romanian studies at Georgetown University.

That complicated history serves as the backdrop to MK's new mission, which will begin next month, as the primary transit point for the troops returning home from Afghanistan. In 2006, MK became the first military installation in a former Warsaw Pact country to host a permanent presence of U.S. troops. It consisted primarily of a headquarters staff and rotating groups of troops charged with training the Romanians, giving the U.S. access to a strategically located base along the Black Sea.

The transit mission brings Romania and the United States even closer. At least 20,000 U.S. soldiers and Marines are expected to flow through the air base between now and the end of 2014, as the Obama administration winds down combat operations in Afghanistan. That number could balloon to 30,000 troops if President Barack Obama decides to pull the plug on all U.S. military operations in Afghanistan after 2014, said Army Maj. Gen. John O'Connor, whose command in Germany will oversee the transit mission at MK.

"Our vision there is to keep MK as a temporary location, not to build it out," O'Connor, commanding general of the Army's 21st Theater Sustainment Command, told Foreign Policy. "It's what we call the accordion effect: As missions come up, we expand. And as this mission comes down, we'll collapse MK with no intent to build it out as any permanent structure."

The accommodations will be sparse. O'Connor said his soldiers are only building basic, cheap wood buildings to house the combat forces passing through to and from Afghanistan. Up to 3,000 troops could be at MK at a time, adhering to an agreement reached between Bucharest and Washington, the general said.

MK will replace the Manas Transit Center in Kyrgyzstan, a highly controversial base that has been at the center of a bitter and expensive power struggle between the U.S. and Russian governments. The U.S. spent hundreds of millions of dollars to pay off the government in Bishkek, Kyrgyzstan's capital, to keep the base open, but the country's relationship with Washington became increasingly hostile when Russia pushed Bishkek to significantly increase how much it was charging the Pentagon to route troops and supplies through the base.

The MK agreement was announced by the Pentagon in October during a visit by Romanian Defense Minister Mircea Dusa. Talk to O'Connor, though, and it is clear the United States was considering alternatives to Manas long before that. With it still in operation, the Pentagon quietly sent some 20,000 U.S. forces through MK over the last two years, including some with the Army's 82nd Airborne Division. It's "proof of concept," the general said, that the Romanian base could serve as the main U.S. transit point for the war in Afghanistan.

MK is three times as far from Kabul as Manas, but it will cost the United States less to use it overall than Manas, said Mark Blackington, a spokesman with U.S. Central Command, which oversees military operations in the Middle East and southwest Asia. That's because while the Air Force's C-17s will have to fly farther out of Afghanistan to get to MK, the charter flights used to take the troops home from there will cost less than those flying out of Manas, he said.

The mission at MK won't be quite as large as the one at Manas -- a reflection, in part, that the size of the war in Afghanistan already has shrunk. Still, some 400 troops under O'Connor's command will be based there this year to process troops in transit, with the work beginning in days. A team of three colonels will be leading the transit mission at MK. In return for allowing the U.S. transit mission, the Romanian government will get an undisclosed amount of fuel, O'Connor said.

Manas has typically had a permanent staff of roughly 1,400 troops and 200 civilians and contractors working for the Defense Department. Between February and July, when the lease at Manas runs out, U.S. forces in transit could be sent through either Romania or Kyrgyzstan, with the mission eventually shifting entirely to Romania, O'Connor said.

The transit mission moving to MK highlights a basic truth: While the United States' popularity in many regions of the world is tenuous, it remains immensely popular in the former Eastern Bloc, a collection of countries that were once under communist Soviet rule. They include Romania, Bulgaria, Poland and Georgia. In one example, Poland and Romania agreed to host aspects of NATO's defense missile shield, angering Russia.

Poland and Lithuania also are accused of allowing CIA prison sites in their countries. Polish officials said last Friday they would investigate new allegations in The Washington Post that the agency interrogated al-Qaida leaders at an intelligence training facility in the northeastern part of their country: http://wapo.st/KNsyJX.