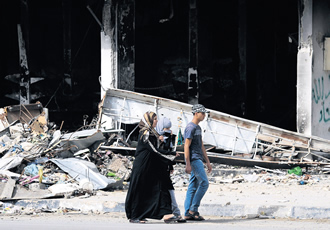 The dictator who ruled Libya with an iron fist for nearly four decades may be gone, but long-suppressed racial hatred is now coming to the surface.

A FREE Libya has been declared following an eight-month uprising, which resulted in the death of former Libyan leader Muammar Gaddafi. The Libyan people have now set their sights on building a viable democracy, drafting a new constitution and organising the country’s first free parliamentary and presidential elections.

However, since the toppling of Gaddafi’s 42-year regime, the country’s interim leaders of the National Transitional Council (NTC) have struggled to find a common voice. Acting prime minister Mahmoud Jibril acknowledged that with their common enemy disposed of, unity remained a key challenge for Libyans.

“Removing weapons from the streets, establishing law and order and uniting the disparate factions of the NTC are the main priorities following Gaddafi’s death,” he said in a statement to the press at the World Economic Forum’s annual regional meeting in Jordan. With more than 140 tribes and clans, Libya is considered one of the most tribally fragmented nations in the Arab world. Tribalism remains a prominent force in a country now awash with weaponry.

In the aftermath of Gaddafi’s reign, nearly 40 independent militias that emerged during the rebellion remain at large, raising questions as to whether the NTC has the ability to rein in all the various groups, many of which have competing interests and look to settle scores from the past.

For Libyans from the far south, this daunting picture has already become a reality. Tawergha, 65 kilometres south of Misurata along the western coast of the Gulf of Sirte, was home to over 20,000 people. Now it has become a ghost town.

The name Tawergha was given to the town’s black population because they had dark-skinned features like the original Tuareg. The Tuaregs, who inhabit the border area of Libya, Chad, Niger and Algeria, historically were nomads who controlled trans-Saharan trade routes and had a reputation for being robbers.

During the seventies, Gaddafi assembled Tuaregs and other African recruits into an elite battalion known as the Al-Asmar, meaning ‘The Black’ in Arabic. These units were often sent on military expeditions into neighbouring countries. At the onset of the revolt in February of this year, Tuareg units were unleashed on protestors.

As a result, racial hatred, fuelled by unconfirmed rumours that African mercenaries had been hired by Gaddafi to quash discontent, created another common enemy – dark-skinned Africans. In the eyes of Misuratans, Tawerghans were the perpetrators of some of the worst human rights abuses during Gaddafi’s siege on Misurata in March and April.

On 15 August, rebel forces going by the name of ‘The Brigade for Purging Slaves, Black Skin’ reportedly detained and displaced hundreds, while other Tawerghans have disappeared without a trace.

“If we go back to Tawergha, we will then be at the mercy of the Misurata rebels,” a woman, who has been living in a makeshift camp with her husband and five children, told Amnesty International. “When the rebels entered our town in mid-August and shelled it, we fled just carrying the clothes on our backs. I don’t know what happened to our homes and belongings. Now I am here in this camp, my son is ill and I am too afraid to go to the hospital in town. I don’t know what will happen to us now.”

Caught in the crossfire

Also suffering are economic migrants, refugees and asylum-seekers from sub-Saharan Africa. Many of them have sought refuge in neighbouring Tunisia or Egypt. For some, Libya was a transit country, but for others it had become a place of rebuilding.

“Fearing for their life, my parents who are from Al-Fasher city in Darfur fled to Tripoli in 1998,” 20-year old Eiman said. “Unfortunately the uprising in Libya took a bloody turn because people no longer respected the law and started raping women, taking hostages and killing people. For two months my family remained trapped in our house. They were accusing and killing all black males caught on the street of being mercenaries, which meant that our mother had to try and gather food but there were many days that we starved.”

Calls by human rights groups urging the NTC to protect black Libyans in the newly liberated Libya seem to have fallen on deaf ears, and this could set a precedent for what is to come.