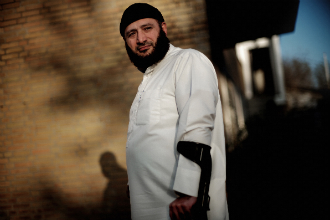 AARHUS, Denmark — The rush of morning shoppers parted to make way for Talha, a lanky 21-year-old in desert camouflage and a long, religious beard. He strode through the local mall with a fighter's gait picked up on the battlefields of Syria. Streams of young Muslim men greeted him like a returning king.

In other countries, Talha — one of hundreds of young jihadists from the West who has fought in Syria and Iraq — might be barred from return or thrown in jail. But in Denmark, a country that has spawned more foreign fighters per capita than almost anywhere else, the port city of Aarhus is taking a novel approach by rolling out a welcome mat.

In Denmark, not one returned fighter has been locked up. Instead, taking the view that discrimination at home is as criminal as Islamic State recruiting, officials here are providing free psychological counselling while finding returnees jobs and spots in schools and universities. Officials credit a new effort to reach out to a radical mosque with stanching the flow of recruits.

Some progressives say Aarhus should become a model for other communities in the United States and Europe that are trying to cope with the question of what to do when the jihad generation comes back to town.

For better or worse, this city's answer has left the likes of Talha wandering freely on the streets. The son of moderate Muslim immigrants from the Middle East, he became radicalised and fought with an Islamist brigade in Syria for nine months before returning home last October. Back on Danish soil, he still dreams of one day living in a Middle Eastern caliphate. He rejects the Islamic State's beheading of foreign hostages but defends their summary executions of Iraqi and Syrian soldiers.

"I know how some people think. They are afraid of us, the ones coming back," says Talha, a name he adopted to protect his identity because he never told his father he went to fight. "Look, we are really not dangerous."

Yet critics call this city's soft-handed approach just that — dangerous. And the effort here is fast becoming a pawn in the much larger debate raging across Europe over Islam and the nature of extremism. More and louder voices here are clamouring for new laws that could not only charge returnees with treason but also set curbs on immigration from Muslim countries and on Islamic traditions such as religious circumcision.

In a country that vividly remembers the violent backlash in the Muslim world after a Danish newspaper published cartoon images of the prophet Muhammad in 2006, many here want Aarhus to crack down on — not cajole — extremists.

"They are being much too soft [in Aarhus], and they fail to see the problem," said Marie Krarup, an influential member of Parliament from the Danish People's Party, the country's third-largest political force. "The problem is Islam. Islam itself is radical. You cannot integrate a great number of Muslims into a Christian country."

Aarhus is treating its returning religious fighters like wayward youths rather than terrorism suspects because that's the way most of them started out.

The majority were young men like Talha, between 16 and 28, including several former criminals and gang members who had recently found what they began to call "true Islam." Most of them came from moderate Muslim homes and, quite often, were the children of divorced parents. And most lived in the Gellerupparken ghetto.

A densely packed warren of mid-rise public housing blocks, Gellerupparken is home to immigrants and their families who arrived in the waves of Muslim migration that began in the 1960s. Unemployment — especially among youths — is far higher than the city average. At one point, crime was so bad that even ambulances needed police escorts. It made a perfect breeding ground for angry young men at risk of becoming militants.

On a quest to change that, the city is in the midst of a major overhaul of the ghetto. Better housing could improve conditions and lure more ethnic Danes, contributing to integration. New thoroughfares and roads, meanwhile, would link it more closely to the rest of the city.

"These are young people who have turned to religion at a very difficult time in their lives, and they are dealing with existential questions about going to fight for what they believe in," said Aarhus Mayor Jacob Bundsgaard. "We cannot pass legislation that changes the way they think and feel. What we can do is show them we are sincere about integration, about dialogue."

"It doesn't feel strange, being back," said Talha, as he passed an organic juice stand at a local mall. Four blond Danish girls eye him warily. He is well known here, a heroic figure among his Muslim peers, many of whom know he fought in Syria and greet him with hand on heart and a respectful nod. "It's home."

He was born in Denmark, to an immigrant family that hailed from a nation bordering Syria. To maintain his privacy, he declined to publicly state which one. The urge to go and fight, he said, built like a slow burn. For months, he had watched YouTube videos of civilian killings committed by the government of Syrian President Bashar Assad. "I could not just sit in the comfort of Denmark while thousands and thousands of my brothers were dying," he said. He began discussing his feelings with other religious friends, and within a few months, a plan was hatched.

On the day he left for Syria, in October 2012, he told his divorced parents that he and a friend were going to Turkey on vacation. Instead, his friend's cousin had arranged their passage across the border to Syria. He worked in a refugee camp for a few weeks before getting attached to an independent battalion associated with Ahrar al-Sham, a group with alleged ties to al-Qaida. During the months when he manned heavy-artillery batteries near Aleppo, he said, his outfit also maintained harmonious ties with the Islamic State.

"You cannot believe everything you hear about the Islamic State," Talha said. "There may be bad things, but also good things."

He returned to Denmark for a few months in 2013, telling his mother — but not his father — what he had done. Since his own religious awakening, he had persuaded her to start wearing a head scarf, and she become more religious herself. But "she cried when I told her where I had been," he said. When he returned to Syria a few months later, she did not try to stop him.

Talha came back to Denmark last October, when bouts of infighting broke out among rival factions. Since then, he has had one meeting, he said, with a police official who questioned him about his plans and intentions. Under Aarhus's program, he was offered — and accepted — taxpayers' help for the math classes he needs to enter engineering school.

Yet, because counseling is voluntary, he has opted to skip the therapy sessions he says he doesn't need. He wants no harm to come to Denmark, he said, but bemoans what he describes as a mounting anti-Islamic sentiment in the media and national government.

Danish authorities say the vast majority of the 30 or so Aarhus residents who went to Syria were somehow linked to one of the most polarising houses of worship in Europe — the Grimhojvej mosque. Talha began to worship there four years ago, two years before he left for Syria. He found the mosque through a childhood friend who helped him leave behind what he described as a world of secular vice. Parties with Danish teens. Drinking. Girls. "That's my past," he said. "Not my present."

But Talha wants to make one thing clear. He, like the mosque leadership, denies that Grimhojvej recruited him and other fighters.

"These are good men," he said with a smile.

The mosque opened in 2008 and, in recent years, absorbed the congregation of a nearby mosque that closed and where several men had been previously detained on terrorism charges. One of its current imams is under investigation in Germany for inciting hate during a visit to Berlin in July. From 2008 to 2013, another imam — Abdessamad Fateh, a 46-year-old Moroccan immigrant also known as Abu Hamza — preached at Grimhojvej. After spending five months in Syria, he is back in Aarhus. According to Arab intelligence officials, he recruited Westerners — including a young Danish convert to Islam — to fight in Syria and Iraq. This month, Fateh was added to the US list of suspected terrorists thought to have ties to al-Qaida.

Inside the converted ice factory that houses Grimhojvej, Oussama el-Saadi, the mosque's chairman, dismissed the allegations with a wave of his hand. If they are guilty of anything at Grimhojvej, he says, it is simply of being devout believers. "We have the right to our faith," he said.

Nevertheless, in January, Aarhus officials gave the mosque an ultimatum. It could either open itself up to a new dialogue with the community or face a public condemnation and, quite likely, stepped-up legal pressure.

The mosque chose to cooperate.

The mosque still openly backs a caliphate in the Middle East, refuses to offer a blanket denunciation of the Islamic State and warns that Denmark's recent decision to join the US-led coalition in airstrikes against the militant group may only fan the fires of homegrown terrorism.

Yet Grimhojvej has undeniably nuanced its public position, rejecting, for instance, the Islamic State's beheadings of foreign hostages. Saadi denies allegations that the mosque became a recruiting center for militants, saying it did not discourage or encourage those who wanted to go and fight. But now, its official line — at least in public — is that the young Muslims of Aarhus should stay home.

Police officials say the statistics prove their approach is working.

"In 2013, we had 30 young people go to Syria," said Jorgen Ilum, Aarhus's police commissioner. "This year, to my knowledge, we have had only one. We believe that the main reason is our contact and dialogue with the Muslim community."