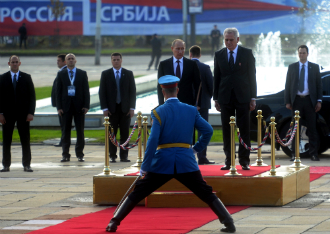 The country next in line to join the European Union staged a spectacle not seen in a generation Thursday to honour Russian President Vladimir Putin.

Serbia held its first military parade since the days of former President Josip Broz Tito as part of the celebrations during the Russian leader's six-hour visit Thursday. The festivities commemorated the Soviet Union's role in liberating the country from Nazi occupation in World War II, according to the government in Belgrade.

Serbian Prime Minister Aleksandar Vucic, an ally of strongman Slobodan Milosevic during Yugoslavia's bloody breakup, is balancing the nation's EU aspirations with traditional Russian ties. Putin's visit gives him an opportunity to show the 28-nation bloc that he has other foreign-policy options if membership criteria become unpalatable, according to Djordje Vukadinovic, an analyst at the Belgrade-based New Serbian Political Thought institute.

"Vucic is honoring Putin with the military parade to consolidate his own standing within his electorate," Vukadinovic said. "At the same time, he's sending a message to the EU that he actually has an alternative if they press him too hard on democracy, human rights or media freedoms."

The European Commission, the EU's executive, last week called on Serbia to improve democracy, the rule of law, media freedoms, the economy and ties with Kosovo. Serbia has yet to open any of the 35 policy-reform areas needed to join the EU after starting the process in January.

As the talks drag on, with former Yugoslav partners Slovenia and Croatia already in the trading bloc, public support for membership fell to 46 per cent in June from 51 per cent six months earlier, according to a survey of 1,015 people.

The split is between proponents of closer ties with the EU, Serbia's largest trading partner, and Russia, which supplies the country's energy and supports its rejection of international recognition for Kosovo's independence. Vucic withstood calls to join sanctions against Russia over Ukraine.

The Belgrade parade, the first since the collapse of Yugoslavia, included tanks and other military vehicles and a fly-over of fighter jets.

"We have left wars behind," President Tomislav Nikolic said before the parade started. "Today, Serbia bases its growth on free access to the Russian market and investments from Russia."

Nikolic awarded "dear brother Vladimir" the highest Serbian decoration, the Order of the Republic. Putin was greeted in Belgrade by cheering crowds, standing in the rain, with one of the banners saying: "Vladimir, Save Us."

The rupture oriented Yugoslavia westward even before the fall of communism. The EU today accounts for 64 per cent of Serbia's foreign trade and 72 per cent of investment, according to Serbia's statistics office and central bank. Russian investment was 598 million euros between 2005 and 2013, compared with total investments of 13.3 billion euros.

Russia may consider allowing a quota of cars made by Italian manufacturer Fiat SpA in Serbia to be exported to Russia, Putin said in Belgrade. He also sees a chance for Serbian farm exports to triple to 390 million euros if various agreements have been implemented. Russia has banned imports of European foodstuffs and Serbia has promised Russia it won't allow EU countries to use its territory to export food.

Western sanctions "provide opportunities" for countries that "want to cooperate with Russia," Putin said in Belgrade. "If there's no luck, then misfortune can help."

Serbia's further EU integration is years away, even after Vucic and Nikolic vowed to press for membership in 2019. EU Enlargement Commissioner Johannes Hahn said on 30 September new members won't be accepted before the turn of the decade.

That gave Putin an opening amid Russia's worst standoff with the EU, the United States and their allies since the end of the Cold War, according to Dimitar Bechev, a senior policy fellow at the European Council on Foreign Relations.

Vucic's six-month-old administration is trying to jump-start economic growth and create jobs as the economy faces its third recession since 2009.

His policies are designed to quell growing public discontent, with sporadic protests by industrial workers, teachers and police over planned public wage cuts. Students, who demonstrated this week in Belgrade, are being forced to pay more for their studies as state universities increase fees.

The premier is trying to "improve his image among his own supporters, who have totally different views" on issues including public wage and pension cuts or the Gay Pride parade organised last month, said Vukadinovic at the Serbian Political Thought. Demonstrating a closeness with Putin may win back some of that support, he said.

"For Serbian citizens, the love for Russia is purely emotional and irrational" and political leaders "have been encouraging the emotional bond with Russia," Svetlana Logar, a sociologist and researcher at the Belgrade-based pollster Ipsos Strategic Marketing, said in an interview. "But when you ask them about a country they'd like to move to, it's Germany."