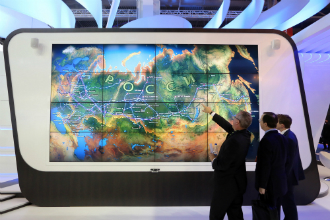 The decline in oil prices may be depriving Russian President Vladimir Putin of his biggest ally.

Oil has been the key to Putin's grip on power since he took over from Boris Yeltsin in 2000, fueling a booming economy that grew 7 per cent on average from 2000 to 2008.

Now, with economic growth slipping close to zero, Russia is reeling from sanctions by the United States and the European Union over its land grab in Ukraine, and from a ruble at a record low.

Putin, whose popularity has been more than 80 per cent in polls since the annexation of the Crimean Peninsula in March, may have less money to raise state pensions and wages, while companies hit by the sanctions also seek state aid to maintain spending.

"His ratings remain high but for a person conducting such a risky policy, Putin has to understand the limits of patience for the people, business and political elite," said Olga Kryshtanovskaya, a sociologist studying the country's elite at the Russian Academy of Sciences in Moscow. "Putin is thinking hard how not to lose face while maintaining his support."

Brent crude is down more than 20 per cent from its June high, cutting billions of dollars in tax revenue from Russia's most valuable export. The budget will fall into deficit next year if oil is less than 104 US dollars a barrel, according to investment bank Sberbank CIB. At $90, Russia will have a shortfall of 1.2 per cent of gross domestic product. Brent for November fell 4.3 per cent Tuesday to settle at 85.04 US dollars in London.

The country has spent about 4.7 billion euros on currency interventions this month trying to keep the currency afloat. Russia's largest oil company, Rosneft; gas producer Novatek and the largest lender, Sberbank, are among companies targeted by the sanctions.

The curbs will subtract 1 per cent to 1.5 per cent from GDP and are a bigger threat than oil prices, according to Alexei Kudrin, the finance minister from 2000 to 2011 who steered Russia's accounts back to surplus.

"The sanctions are having an across-the-board impact," Kudrin said by phone. "It isn't just about the loss of money but the worsening investment climate, rising capital flight and a slide in the currency."

Russia faces weak growth even if the EU sanctions expire next year as expected, Charlie Robertson, the chief economist at Renaissance Capital, said by phone. The International Monetary Fund earlier this month reduced its 2015 forecast for Russia to 0.5 per cent from 1 per cent in July.

"Growth is virtually nonexistent this year and isn't terribly much better next year," Robertson said Oct. 10, adding that the economy could contract 1.7 per cent in 2015 if crude averages 80 US dollars a barrel.

Putin, 62, a former KGB colonel, has criticised the US and Europe for expanding the North Atlantic Treaty Organization up to Russia's borders, and he has vowed to keep neighboring Ukraine out of the Cold War-era military alliance.

Top Kremlin officials said after the annexation of Crimea that they expected the US to artificially push oil prices down in collaboration with Saudi Arabia in order to damage Russia, according to Khryshtanovskaya. Putin's spokesman, Dmitry Peskov, didn't respond to a request for comment on this issue, nor did he respond over four days of calls requesting comment about oil's importance to Putin.

"Prices are being manipulated," state-run Rosneft's spokesman Mikhail Leontyev said Oct. 12 in an interview with Russkaya Sluzhba Novostei radio. "Saudi Arabia has started offering big discounts on oil. This is political manipulation, manipulation by Saudi Arabia, which can end badly for it."

The reason Saudi Arabia cut its crude prices earlier this month was to boost margins for refinery clients and the move didn't signal rising competition for market share, a person familiar with the nation's oil policy said last week.

The Russian budget loses about 80 billion rubles ($2 billion) for every dollar the oil price falls, according to Maxim Oreshkin, head of strategic planning at the Finance Ministry.

In 2009, Russia posted a 5.9 per cent budget deficit when oil averaged 61.30 US dollars a barrel, 40 per cent less than the 98 US dollars that was needed to balance the budget that year.

The oil price has collapsed to its lowest in four years as demand growth slows and output in the US is near a 30-year high. Producers in the Organization of Petroleum Exporting Countries, including Saudi Arabia and Iraq, have cut prices.

Russian currency reserves are at a four-year low after dropping 44 billion euros in 2014 to 355 billion euros last week. The ruble, down 20 per cent against the US dollar this year, has fallen for five weeks, the longest stretch of losses since March.

Russia's central bank intervened over the past 10 days to stabilise the ruble, Central Bank Governor Elvira Nabiullina told lawmakers in Moscow on 13 October. The action has so far failed to halt the ruble's decline amid a domestic foreign currency shortage stemming from sanctions.

Putin and the central bank earlier this month ruled out capital controls after two officials with direct knowledge of the discussions said they were under consideration.

Russia's economic fortunes have fluctuated along with the swings in oil prices since the Soviet era. In the 1970s, after the Arab oil embargo sent prices soaring, Soviet leader Leonid Brezhnev presided over a period of relative prosperity and rising global influence.

An oil glut in the 1980s led to a six-year decline in prices, contributing to the Soviet Union's failure to keep its shelves stocked with basic consumer goods and undermining its economy. Putin has described the collapse of the Soviet Union as the greatest geopolitical catastrophe of the 20th century.

Crude prices remained low throughout Yeltsin's presidency, when the economy was racked by hyperinflation, wage arrears and falling standards of living that culminated in the 1998 Russian financial crisis.

The "addiction" to oil "is a big part of why the Soviet Union collapsed," said Michael Bradshaw, professor of global energy at the Warwick Business School in Coventry. "Putin rode a wave of high oil prices in his first two terms, so his job now could get trickier if prices stay down."

With oil prices falling amid an abundance of global oil supplies and slowing demand, Russia may be forced to tap its sovereign wealth funds to bail out companies blocked by sanctions from international borrowing.

Economy Minister Alexey Ulyukayev said on 8 October that Russia may start putting about 15 billion euros from the 65 billion euros Wellbeing Fund into infrastructure projects as early as this year. The fund was originally intended to ensure the long- term viability of the country's pension system.

Rosneft and Novatek both have applied for state funding and may receive the money as early as this year if they complete the paperwork on time, Finance Minister Anton Siluanov said on 20 September. Each could get as much as 3 billion euros, including from the Wellbeing fund, he said.

If Putin is concerned about the state of Russia's economy, he isn't showing it.

"The state is ready to support those sectors and companies that faced unjustified external sanctions," the president said at a banking forum in Moscow on 2 October, adding that the measures would help strengthen Russia's resolve to boost growth.

If crude prices remain depressed, the Kremlin could cut social programs and pressure businessmen to maintain full employment, Clifford Gaddy, an economist specialising in Russia at the Brookings Institution in Washington, said by phone.

"This regime is more consciously prepared to deal with low oil prices than either the Soviets or the authorities in the 1990s," Gaddy said. "It's possible that they are over- extended, but Putin is a strategic planner who has certainly considered life at various price points."

Shunned by the US and the EU, Russia is stepping up efforts to reach out to other nations. Chinese Premier Li Keqiang on 14 October signed an agreement with Prime Minister Dmitry Medvedev to build a high-speed transport corridor linking Moscow and Beijing.

The two countries in May signed a 312 billion-euro, 30-year natural gas deal after more than a decade of talks. Chinese banks have stepped up to help fill the void created by the closure of US and Europe debt markets.

Closer to home, Armenia last week signed a deal to join Russia, Belarus and Kazakhstan in the Eurasian Economic Union, which was conceived by Putin as a post-Soviet version of the EU.

Putin managed to avoid mass unemployment during the 2008 financial crisis, when the price of oil dropped further and faster than currently, Gaddy from Brookings said. If Russia faces an extended slump now, his handling of the last crisis could serve as a template.

"If there is a prolonged period of low prices, it's crucial that people don't lose their jobs," Gaddy said.