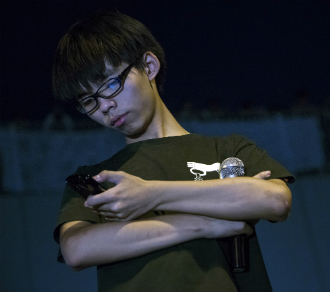 The student who is leading mass protests demanding democracy for Hong Kong is now old enough to vote.

Joshua Wong, who last week featured on the cover of Time magazine's Asian edition, turned 18 Monday. His first meaningful act after coming of age was to hold a press conference just after midnight at the main protest site, at which he outlined the protesters' latest negotiating position. Then, at around 1:30 am, he enjoyed a moment away from the media spotlight, sharing a cake with about 15 friends among the tents set up by members of the Scholarism activist group he founded in 2011.

The slender, bespectacled teenager has become the face of the protest movement for many since he kick-started the street protests on 26 September, after he urged students to storm the fenced-off Civic Square outside the government's headquarters in the Admiralty district.

His arrest that night, along with detention of two other student leaders the next day, spurred thousands more people on to the streets to support the students. When Wong was released two days later, after a court ruled his detention was unlawful, the pro-democracy protests were grabbing worldwide attention as police fired tear gas to try and disperse them.

He's been a constant presence at the site since, rallying students when their enthusiasm flagged, keeping up demands for an unfettered leadership election in 2017 and the resignation of the city's leader, Chief Executive Leung Chun-ying. The protests, that have blocked roads in parts of the city and presented the biggest challenge to Chinese rule since it resumed sovereignty in 1997, are now in their third week.

Wong marked the first morning as an 18-year-old in what is now typical fashion for the young activist: with a radio interview. After police took down some of the barricades around the main protest site in Admiralty Monday morning, Wong told Commercial Radio the force was "testing water" as a prelude to clearing protesters. The police Monday said they weren't there to remove the crowd.

Earlier Monday, just before 1 am, Wong posted his birthday wishes on Facebook: safety for his family, girlfriend and Scholarism comrades; perseverance for friends to stick with the occupation of the roads in the city; and that China's legislature withdraws its decision stipulating the terms of Hong Kong's next election.

The 18-year-old has a history of activism. He first rose to prominence in 2012 at the age of 15 when the government tried to introduce national education that encouraged Chinese patriotism into the school curriculum.

They spearheaded rallies outside the government headquarters in 2012 that forced Leung to scrap the proposal. Estimates of the protesters then ranged from 36,000 to 120,000 people.

"Joshua Wong has highlighted the students' intense interest in long-term democratisation in Hong Kong and sent a message to Beijing that if Beijing doesn't move forward on this issue they can expect future disruptions," said David Zweig, professor of political science at the Hong Kong University of Science and Technology.

Wong, who has become an icon for the city's youth and typically wears a black Tee shirt with the word Scholarism in orange, has said he doesn't want to be relied on as the leader of the protest movement.

After Time ran the cover photo of Wong on its website alongside the heading: "The Face of Protest," the freshman took to Facebook to respond. "It should be the faces of protest," he wrote on 9 October. "The thousands of occupiers coming together are more suitable than me to be on the cover."