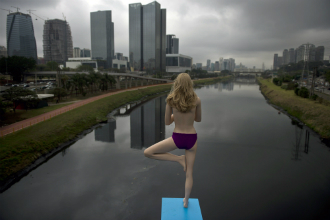 Brazil's worst drought in eight decades has turned most of Cantareira, the four-lake complex that supplies half of greater Sao Paulo's 20 million residents, into a dried-up bed of cracked earth. What's left are sediment-filled pools in the centre — the dead reserves — that were previously untappable until Sabesp built 3 kilometres of pipes to drain the water.

The manoeuvre bought Sabesp some time by boosting drinking supplies by 182.5 billion litres to almost 27 per cent of Cantareira's capacity. Sabesp, formally Cia. de Saneamento Basico do Estado de Sao Paulo, expected the water to last until reservoirs are refreshed by summer rains that typically run from October through March.

That didn't happen: Cantareira fell to 7.6 per cent of capacity as of Wednesday, less than before the investment. Sabesp is now planning to add more pipes to tap the very last of the dead water.

"When the level is at 10 per cent, it's already alarming from a technical point of view," Giuliano Dragone, chief executive officer of the National Union of Private Concessionaires of Public Water & Sewer Services, said in a telephone interview. "We are at a critical point, returning to the same place where we were."

Analysts are cutting their ratings on Sabesp and the shares' total return of negative 24 per cent this year is the worst among the world's 31 biggest publicly traded water utilities, according to data compiled by Bloomberg. Five of the 14 analysts who rate the company say sell, with four recommending investors hold. That compares with the start of the year, when there were no sell ratings and seven buy recommendations.

Brazil's biggest water utility, which is controlled by the state of Sao Paulo, has been giving discounts to clients who cut consumption and is using water from other reservoirs as it tries to avoid rationing.

With falling supplies and rising costs to pump water from deeper ground, analysts have reduced estimates for the company. Adjusted earnings will slide 26 per cent this year to 1.4 billion reais, according to the average of eight forecasts compiled by Bloomberg. Revenue will drop 12 per cent.

Regulators told the company in July it was at risk of running out of water within 100 days unless it started rationing. Thousands of residents are already complaining of lower flows from their taps in the past two months.

Sabesp last month received approval to use the so-called secondary technical reserve, a very deep layer of water in Cantareira. The measure would add about 106 billion litres to the system, raising its level to about 18 per cent of the new total capacity, the company's press office said in an e-mailed response to questions.

"Sabesp is ensuring the water supply until March 2015," according to an email from the company's press office.

Weather forecaster Somar Meteorologia expects spring rains in the season that started 22 September to be about average compared with historical levels, not enough to end the drought or help Cantareira recover.

"To reverse the situation, rains should come above average," said Olivia Nunes, a meteorologist at Somar. "To make it worse, water consumption usually increases during the high-temperature months."

Even if rains start next month, the bottom of the reservoir that Sabesp tapped will reabsorb most of the water and won't boost levels at Cantareira, according to Michael Gaugler, senior vice president for equity research at Brean Capital in New York.

"The thought process was: you get a couple of inches of rain in September, and that gets the bottom of the reservoir ready for supply water, which you can actually use, but that never came," Gaugler said by phone. "Even if we dont have a problem in October and November, every day that goes by, your odds of getting back to where you need to be get worse and worse."