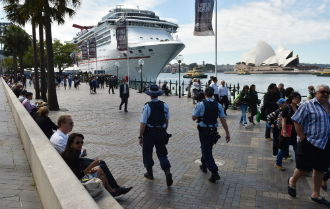 Mohamed Elomar stopped talking to his father two years before leaving Sydney for Syria, where he started posing on social media with the heads of soldiers who were on the wrong side of Islamic State's fight.

"He was beautiful," a "marvelous boy," Mamdouh Elomar said of his 29-year-old son. At some point, things changed. "He said he didn't want to work for me, and that's it. Two years we never speak, because of our differences."

What led Mohamed Elomar to abandon a life in Australia that included high-profile boxing bouts and a wife and children to become a suspected militant with Islamic State still has his father puzzled. "I don't know where he picked it up from. I think from the people he was hanging around."

The threat of a locally-sown Islamic militancy to a nation about 11,000 kilometres from the Syrian conflict was underscored to most Australians by two incidents over the past week. Days after police conducted the country's largest anti-terror raid in history, an 18-year-old "known terrorism suspect" stabbed two officers outside a Melbourne police station before being shot dead.

Waves of Middle Eastern migrants have seen Australia's Muslim population surge 69 per cent in a decade, with security experts warning that disaffected young men facing fewer job prospects on the fringes of major cities are susceptible to Islamic State propaganda. The teenager shot by police came to their attention after waving an Islamic State flag inside a shopping centre.

"If you're talking about the reasons for radicalisation, you're looking at unemployed, disenfranchised youth who feel marginalised from the community," said Clarke Jones, a former national security adviser to the government and visiting fellow at the Australian National University in Canberra. "That's the case whether it's in the Philippines, Indonesia or Australia. The youths are finally being given a chance to feel like they belong to something."

The number of Australians identifying themselves as Muslim rose from 281,600 in 2001 to 476,300 by 2011 — about 2.2 per cent of the population. Some Islamic families cluster on the outskirts of cities such as Sydney, Melbourne and Brisbane in traditionally working-class strongholds where manufacturing jobs are disappearing.

Poorer job prospects may be exacerbated by prejudice. Muslim workers in Australia were viewed as "other" by employers, fellow workers or customers, resulting in discrimination, according to a University of Newcastle report released in 2011.

Muslims in Australia were more than twice as likely to be out of work, the report said, citing 2006 unemployment data. The western Sydney suburb of Lakemba, which had a Muslim population of 42 per cent, had a jobless rate of 12 per cent, it said.

Australia has raised its terrorism alert to the second- highest level as it supports President Barack Obama's coalition against Islamic State, deploying 400 air force personnel and 200 Special Forces soldiers to a US base in the United Arab Emirates. The country's anti-terrorism raids last week thwarted an alleged plot by extremists in Sydney to randomly abduct and behead a member of the public.

The 18-year-old man was shot and killed on 23 September after wounding two counter-terrorism officers with a knife. He stabbed the officers in an unprovoked attack outside a police station, where he was due to be interviewed by police about his behaviour, Ken Lay, the chief commissioner of Victoria state police, told reporters.

The war in Syria and Iraq has been "sucking in misguided and alienated Australians," Prime Minister Tony Abbott said in parliament on 22 September. The government says at least 60 Australians are fighting alongside militant groups in Syria and Iraq, with 100 more funding or facilitating them.

Mohamed Elomar, who worked as a draftsman in his father's engineering business in Sydney, left for Syria more than six months ago, according to the Australian newspaper. The Australian Federal Police has issued an arrest warrant for him for alleged terrorism-related activity.

His uncle Mohamed Ali Elomar was sentenced in 2010 to 28 years in prison for preparing for a terrorist attack related to the accumulation of materials for an explosive device. Mohamed Elomar's wife, Fatima, was this month charged with supporting foreign hostile acts, with her case adjourned until November.

Mamdouh Elomar spoke on a sunny spring day in western Sydney at a barbecue organised to show Muslim community opposition to Islamic State. Some women's hijabs were patterned with the Australian flag. Small Australian flags were painted on people's cheeks as platters of fruit were handed out, and the scent of shisha smoke filled the air as children played on jumping castles.

"The purpose of today was to show the Australian people we don't support the extremists," Elomar said. "No one religion is allowed to do this."

There has never been a major Islamic terrorist attack on Australian soil, although 88 Australians were killed in the 2002 bombings of bars on the Indonesian tourist island of Bali.

The use of social media to proselytise about Islamic State means Muslims in any country can be radicalised. Islamic State now produces an English-language magazine called Dabiq — the tagline of a recent edition is "It's either the Islamic State, or the flood."

Australia's links with Islam stem back to before British settlement in the late 1700s, when fishermen from Indonesia traded with indigenous people in the north. The first big wave of Muslim migration didn't occur until the 1970s, with people coming from countries such as Lebanon and Turkey and settling in the major cities of Sydney and Melbourne.

Abbott has used press conferences to talk up the need for all sections of the community to be a part of "Team Australia." He's described Islamic State as a "death cult."

Gary Bouma, emeritus professor of sociology at Melbourne's Monash University, said Australia's support for the US-led offensive against Islamic State could increase the possibility of a terrorist attack in the nation.

"We can't afford to anger and alienate parts of the community and that takes a lot of wisdom and care," said Bouma, the author of "Australian Soul: Religion and Spirituality in the Twenty-First Century."

About 800 police officers carried out last week's raids across northwest Sydney suburbs. All but one of the 15 people detained were later released.

The last major raids in Australia were in 2009, when police thwarted what prosecutors described as a Somali-linked plot to storm an army barracks in western Sydney with automatic weapons. Three men were later jailed.

In 2008, a court convicted a Muslim cleric and several other people of plotting to attack the Australian Football League's 2005 Grand Final in Melbourne attended by about 100,000 people. Police have warned spectators to be vigilant at this year's Grand Final, being played this weekend.

The increased terrorism alert comes at a time when more than 2,000 Australians make the pilgrimage to Mecca to perform the Hajj, a religious ritual that every Muslim must perform in their lifetime. The Australian National Imams Council said it was "angered" when a senior executive was detained last week for more than two hours for a "routine baggage search" and missed his flight.

Anti-Muslim sentiment reached a flashpoint in Australia in the December 2005 unrest in the Sydney seaside community of Cronulla after the assault of a group of surf lifesavers by young men of Middle Eastern appearance led to retaliatory attacks. In recent months, a mosque has been defaced in the Gold Coast and pamphlets distributed in the tourist city of Cairns urging the boycott of halal products.

The rhetoric is spilling into political circles. Jacqui Lambie, a senator with the small Palmer United Party, told parliament on 22 September that supporters of sharia law are "maniacs and depraved humans." Senator Cory Bernardi, a governing Liberal Party lawmaker, used social media to say the burqa was "a shroud of oppression and flag of fundamentalism" that should be banned.

Muslim leaders are appealing for calm, with the Grand Mufti of Australia, Ibrahim Abu Mohammad, calling upon politicians and the media in a 19 September press statement to "refrain from using the raids to inflame hatred" in society.

"There's often frustration from a lot of the Muslim leaders that they're not connecting with the younger generation," said Greg Barton, a professor at Monash University's School of Political and Social Inquiry in Melbourne. "Community leaders have had trouble making the connection between young men talking rubbish and the real violence that sometimes eventuates."

Mamdouh Elomar said young people in Australia are being "brainwashed" from what they see on the Internet. He tells other parents who are worried about their sons: "Look after them." "Especially watch where they hang around and where they go."