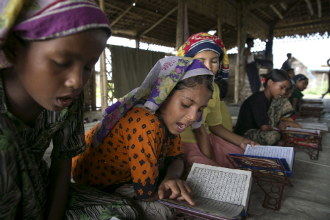 SITTWE, Myanmar — A little girl balances a bag of donated rice on her head as she begs for her family of eight. Other children play in fetid, trash-clogged pools of water. And at a religious class at a makeshift mosque, more than a third of the children had not eaten that day. Or the day before.

The United Nations says that 135,000 ethnic Rohingya Muslims are still stuck in refugee camps on the western coast of Myanmar, also known as Burma, two years after the government rounded them up in the wake of religious violence that left villages scorched, thousands homeless and more than 200 dead.

Rohingya, a long-persecuted ethnic minority, have been forced to live as virtual prisoners in temporary huts, scraping by on donated bags of rice and chickpeas and whatever fish they could pull from the ocean. The situation is so dire that some 86,000 people have tried to flee by boat, and Human Rights Watch has accused the government of a campaign of "ethnic cleansing." Yanghee Lee, the United Nations special rapporteur for human rights in Myanmar, said Saturday that the situation was "deplorable" and that restrictions on movement have had a severe impact on the Rohingyas' access to jobs, water and sanitation, health care and education.

"The Muslim community . . . continues to face systematic discrimination, which include restrictions in the freedom of movement, restrictions in access to land, food, water, education and health care, and restrictions on marriages and birth registration," Lee said.

The humanitarian crisis worsened over the winter, after the Myanmar government suspended operations of the aid group Doctors Without Borders in the area, leaving more than 700,000 people without proper medical care, and said only late last week that the doctors could return. Violence forced other organizations to evacuate, then struggle to ramp up aid again.

Now, children are starving. Aid workers say they have seen an alarming uptick in child malnutrition in recent months because for so long, local hostilities hindered their access to mothers and pregnant women and interrupted water, food and sanitation supplies.

"What we have observed from March to June is a dramatic increase in admissions for severe acute malnutrition. We saw the figures doubling," said Bertrand Bainvel, UNICEF's representative in Burma. "We're all still very concerned about the situation."

The Rohingya camps are spread out over miles of the western state of Rakhine, some so remote they are reachable only by boat. With so much time having passed, life has established a rhythm of its own for the residents. In some camps, small markets have sprung up, with goods supplied by Rakhine traders on the outside, the same ethnic group they have long clashed with.

Fish from the nearby ocean dries on long poles, and some residents have planted gardens next to their huts with donated seeds to augment the meager food supply. They are not allowed to leave for the most part, although the residents near the town of Sittwe can take trips in guarded trucks to the one remaining Muslim neighborhood across town.

The Rohingya Muslims are an ethnic minority in Myanmar, the predominantly Buddhist Southeast Asian nation of more than 55 million people. Tensions between the Rohingya and their ethnic Rakhine Buddhist neighbors existed long before the recent flare-up of violence.

During five decades of harsh military rule, the Rohingya were persecuted by the government, human rights experts say, forced to endure hard labor, relocations, rape and torture. Although Rohingya have lived in Myanmar for generations, a strict 1982 citizenship law rendered many of them stateless, and the government continues to consider them refugees from Bangladesh. This year, census workers refused to count those who identified themselves as Rohingya.

Ye Htut, the spokesman for the Myanmar president, Thein Sein, bristled when the word "Rohingya" was used in an interview.

Phil Robertson, the deputy director of Human Rights Watch in Asia, said that the government has engaged in a policy of "social and economic isolation of the Rohingya" for years, particularly since June 2012, when three Muslim men allegedly raped a Buddhist woman.

Since then, Robertson said, "It's been a downward spiral in terms of humanitarian access and accountability. The situation is going badly downhill. You have about 140,000 people in displaced persons camps and another 40,000 locked in their villages without adequate access to food and medical services."

Ye Htut said that the Rohingya are being kept in the camps for their own protection.

The crisis has given rise to widespread international outrage, and questions about whether the United States — which eased economic sanctions on Myanmar after the government began a process of democratic reform in 2011 — has painted a rosier picture of the emerging democracy than is warranted.

"No one is turning a blind eye to anything. In fact we're working continually to help address problems on the ground," said Derek Mitchell, the US ambassador to Myanmar. "What we are doing out here is in anticipation of continued reform, although we need to remain patient as the country deals with increasingly difficult issues going forward."

Doctors Without Borders said in a statement Friday that they were "cautiously optimistic" after the government's surprise announcement that they could return to the area after they were expelled in February for treating victims of a January clash that left more than 40 Rohingya dead — a confrontation the government denies took place. Some, however, viewed the news with skepticism, arguing it could be a public relations ploy ahead of an expected visit by US Secretary of State John F. Kerry in August.

The group was the main provider of medical care for more than 700,000 people in Rakhine state, and the ouster of the 600 staffers and the shuttering of clinics and traveling medical teams left huge gaps. The government compensated with a small mobile team that now numbers around 100.

The impact of the suspension has been profound. One recent humid day in the back of a makeshift pharmacy at a camp just outside Sittwe, dozens of Rohingya waited in line to receive a few tablets of donated medicine. A woman, Ommar Khulsom, 30, clutched her feverish newborn niece. The little girl's mother had suffered from edema throughout her pregnancy and had been under the care of Doctors Without Borders, a local staffer who had worked with the aid group said. When they were forced out, however, her treatment stopped. The night she gave birth, the woman bled to death.

Maung Hla Tin, 33, a carpenter and camp leader, said that about 50 people had died in his section, including more than a dozen babies, in the past two years. His area was without food for 15 days in April, and a nongovernmental organization completely stopped delivering soap, fresh water and other sanitary supplies, which gave rise to widespread diarrhea and other diseases, he said.

The government's unexpected decision to allow Doctors Without Borders back into the camps followed a June meeting at which local leaders, U.N. officials, civil activists and others drew up an action plan to address the crisis. While that was viewed as a positive step, some feel little is being done to address the larger question of the Rohingya's fate.

"In the long term, solutions must be found" for the displaced people and thousands of others living in isolated villages, said Pierre Peron, spokesman for the U.N. Office for the Coordination of Humanitarian Affairs in Rangoon.

Many Rohingya said they fear they may never resume normal lives.

"We're suffering here. We want to go back to our homes," said Thin Mg, 44, who had a small goods trading business before the violence displaced his family. "One day is like one year."