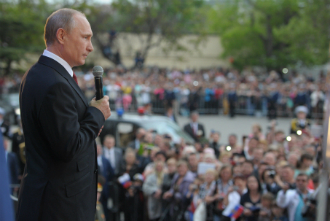 Vowing to defend ethnic Russians wherever they live, President Vladimir Putin has embarked on an aggressive campaign to rebuild the pride and assertiveness of the Russian people, which he says was lost in the breakup of the Soviet Union.

A week ahead of a presidential vote in Ukraine that will help determine that nation's relationship with Russia, Putin has been devoting new power to redressing what he has called the historical tragedy that shattered the Soviet Union into 15 nations.

From annexing Crimea to collecting separatist petitions in Moldova to handing out passports to compatriots in the Baltics, Putin's government has spent recent weeks focused on neighboring countries, many of which have substantial ethnic Russian minorities.

The strategy puts Russia on a collision course with the NATO defense alliance, because two of its members — Estonia and Latvia — have significant Russian-speaking minorities that have long complained of discrimination. NATO has boosted air patrols over the Baltic states and sent troops to do exercises on the ground. Russia earlier this month unleashed missile tests and massive war exercises, including along the border with Latvia and Estonia.

The new efforts have helped rocket Putin's domestic approval ratings to multiyear heights, and they have also inspired some ethnic Russians and Russian-speakers abroad. Pro-Russian separatists in eastern Ukraine this past week asked to join their region to Russia. Days earlier, a top Russian official traveled to the breakaway Transnistria region of Moldova, where he collected what he said were more than 30,000 signatures in favor of unity with Russia.

The swift moves complicate efforts to bring stability to roiling Ukraine, which will vote this week on a new president to replace pro-Kremlin Viktor Yanukovych, who was ousted in February. Although Putin's ambitions appear to fall far short of rebuilding the Soviet Union, the newly nationalist tone is boosting the cohesiveness of Russian-speaking populations in Russia's neighbors and inside Russia itself. Even if Putin refrains from military action, his efforts are likely to create pressure points that can be used against neighboring countries that displease Russia, security officials and analysts say.

When the Soviet Union began splitting apart in 1991,"millions of people went to bed in one country and awoke in different ones, overnight becoming ethnic minorities in former union republics, while the Russian nation became one of the biggest, if not the biggest ethnic group in the world to be divided by borders," Putin said in March at a solemn Kremlin ceremony as he annexed Crimea. He said Russia would never again forsake its ethnic brethren.

Putin has decried the loss of Russia's influence on the world stage, saying that his nation was humiliated during President Boris Yeltsin's tenure in the 1990s. He has said his annexation of Crimea would enter Russian history alongside the exploits of Catherine the Great. More than 80 percent of Russia's population approves of Putin's job performance, according to recent polls.

Russian speakers extend far beyond Russia's boundaries, in part because the breakup of the Soviet Union spun off territories that were historically part of the Russian Empire — such as Kazakhstan — and in part because of economic migration and deliberate resettlement programs during the Soviet era.

Russian officials have kept open the option of direct military intervention in eastern Ukraine, with its large ethnic Russian population, even as they have held back from taking actions that could spark a Russian-Ukrainian war. Russian officials have hinted they will not recognise the results of the upcoming election because, they say, of violence in the east.

Putin's policy "really has acquired a very different and very new quality to it, of aggressive expansionist nationalism," said Eugene Rumer, an analyst at the Carnegie Endowment for International Peace who until January was the national intelligence officer for Russia on the US National Intelligence Council.

The instability in eastern Ukraine creates new challenges for NATO, Rumer said. US officials have said that domestic frustrations have been stoked by covert Russian support. If a similar scenario were to play out in Latvia or Estonia, he said, with violent protests led by a Russian population that has lived in those countries for generations, "it's not at all clear to me what NATO is going to do."

"Putin thinks NATO is a hollow alliance. That it talks a lot but it doesn't walk the walk," Rumer said. "And he's perfectly happy to poke NATO in the eye or whatever part of its anatomy, and say, 'Okay, I'm going to start trouble in the Baltics, and what are you going to do about it?' "

After Ukraine, the most immediately vulnerable country may be Moldova, whose Transnistria region is the westernmost edge of a belt of non-Russian territory that Putin has noted was once part of the Russian Empire. Odessa and parts of eastern Ukraine are also part of that territory, which Putin called Novorossiya, or New Russia.

"This is not about re-establishing the Soviet Union," said Mark Galeotti, a professor at New York University who is an expert on Russian security issues. But, he added, "there is this genuine sense that he is this czar who is gathering the Russian lands."

"Russia is not only monitoring the situation, but we will do everything needed for the residents of Transnistria to see our role as peacekeepers and as guarantors of the Transnistrian Republic's security," Rogozin said during his visit, Interfax reported.

"There's great reason to be concerned in Moldova," said a senior Obama administration official who spoke on the condition of anonymity to discuss internal thinking. "Even if it's not a direct intervention," the official said, "it's a way to be able to weaken the government, to be able to rattle the cage, to be able to say, 'If relations with Russia are bad, we can always pull this one out of the hat and start creating trouble.' "

Kazakhstan, too, appears to be nervous. Officials there proposed laws last month that would include harsh sentences for calls for separatism. In some parts of northern Kazakhstan, ethnic Russians make up more than half the population, and President Nursultan Nazarbayev has long worked to solidify his government's influence in the region.

Putin this month announced new pensions for Soviet-era veterans living in the Baltics, a move that affects Latvia and Estonia, where Russian speakers respectively make up roughly a third and a quarter of the populations. Russian diplomats in those countries have stepped up efforts to distribute Russian passports to ethnic Russians, and Latvian officials say they have seen heightened activity in recent weeks among anti-government, pro-Russian protesters.

The newly expansionist rhetoric coming from the Kremlin has many officials upset.

"Such a doctrine really does not belong to the 21st century," said Latvian Foreign Minister Edgars Rinkevics.

Russians in Latvia have long complained of laws that require schools to teach in Latvian and that also require knowledge of the language to become a naturalised citizen. But Rinkevics and local Russian speakers say the unrest that has plagued eastern Ukraine is highly unlikely in Latvia, a nation that is thoroughly bound to European economic and security structures.

"This protection should have been started 20 years ago. Unfortunately, the Russian leadership did not do anything then. They didn't care," said Sergei Malakhovsky, the editor of an information portal for the Russian community in Latvia. He said Latvia's NATO and European Union membership means that the country is unlikely to return to Russia's sphere of influence.

In Russia, Putin's vows to support Russians abroad have been met with hearty approval.

"We are doing wrong when we don't respond to discrimination," said Robert Shlegel, a member of Russia's lower house of parliament who is on a committee charged with handling relations with Russia's neighbors. "I think we should be much stronger."