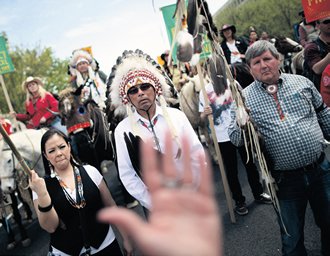 As a child, 78-year-old Yakama Nation elder Russell Jim was forced to go to a boarding school in Washington State and was beaten for speaking his language.

After returning home at the close of the school year, his aunt vowed to protect him, even if that meant "taking me to the hills," he tells IPS. His father brought him to their local, all-white school and threatened to sue if they did not enroll him.

While he retains his language today, he's well aware that the ways Native American communities have been torn apart by displacement from government efforts to force integration into mainstream society.

"I notice when asking tribal people their definition of poverty, it is usually 'having no culture.' It is not defined by money," Janeen Comenote, director of the National Urban Indian Family Coalition (NUIFC), tells IPS.

She says this is an important distinction in a demographic experiencing some of the highest rates inequality in the US. There is a perception that leaving reservations changes this.

"Disparity is disparity and both populations face it," says Comenote of urban and rural tribal populations.

Native American children have the highest rates of foster care placement of all minority groups according to another report. Kings County and Multnomah County in Washington and Oregon States are among the highest in the US at seven to five times disproportionate to Native populations.

Matt Morton, executive director of Native American Youth and Family Center (NAYA) in Portland, Oregon, tells IPS over 20 per cent of native children are in foster care in Multnomah County.

"Our families experience a much higher rate of removal compared to white families in similar situations. We know this is due to biases and expectations of how Native Americans should act when living in severe conditions of poverty. This has not changed (since the Indian Child Welfare Act)."

On reservations they might live in large, extended families. Yakama fisherwoman Caroline Looney Hunt, age 54, tells IPS her mother adopted children informally despite having 11 of her own.