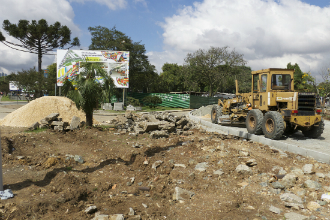 The six-story metal skeleton jutting out from the World Cup soccer stadium in Curitiba was to be the international media centre. But when the games start next month, the world's journalists will be housed in tents in the parking lot beside it.

"FIFA had a plan B," said Reginaldo Cordeiro, the city hall official in charge of Curitiba's World Cup preparations. "The building will not need to be utilised."

Brazil is scaling back its World Cup ambitions and reining in expectations as officials concede they are running out of time. Curitiba's media center is the latest casualty, but numerous projects will be left half-finished, delayed until after the tournament or simply abandoned.

A monorail to link Sao Paulo's domestic airport Congonhas, to the south of the city, was originally planned for the World Cup but will not be ready until 2015. Work on the new terminal 3 at the city's crowded Guarulhos International Airport is ongoing; just eight of a planned 25 airlines will be operating at the terminal during the World Cup.

In the northeastern city of Fortaleza, work to expand a passenger terminal will not be complete, and the airport authority said an "interim terminal" will be installed for 90 days instead. In Cuiabá, a planned light-rail system is unlikely to be open before the end of the year, at best.

As Brazil races to finish, concern is already growing about whether Rio de Janeiro will be ready to host the 2016 Summer Olympics. John Coates, a vice president of the International Olympic Committee, recently said the city's preparations so far were "the worst I have experienced," though he later added he was confident the city could still deliver "excellent Games."

Soccer-mad Brazil has won the World Cup five times, more than any other country, and the 2007 decision to award the country the tournament was greeted with euphoria. "Football is not just a sport for us," then-president Luiz Inácio Lula da Silva said at the ceremony at the time. "It's more, it's a national passion." Officials vowed to be ready.

The southern city of Curitiba, with a population of more than 1.7 million and a strong middle class, should have been one of the 12 host cities where most things went right. The city is renowned for its efficient urban planning and integrated bus system. But its World Cup preparations are as late and as chaotic as any other Brazilian city's.

Instead of building a new stadium, the city opted to renovate one belonging to a local soccer team, Atlético Paranaense, to meet FIFA's rigorous standards. Officials say the stadium will be finished on time, but on a recent day, workers swarmed the site.

"Brazil is a last-minute country. It will be ready, but at the last minute," said Airton Oratz, a worker just a few yards from another in flip-flops laying paving blocks out front. "Just details are lacking."

On that day, those details included 27,000 missing seats, which FIFA General Secretary Jérôme Valcke pointedly referenced at a news conference late last month. "You need a seat. You cannot stand," he said.

The stadium will be one of six that will not have promised Wi-Fi networks. Construction delays mean it will be "difficult" to install sophisticated indoor 4G cellphone systems, said a spokeswoman for Brazil's phone and cellphone company association, and fans may have to rely on heavily loaded cellphone networks.

Stadiums were due to be delivered by December. Six missed the deadline. Those include Curitiba's, the least-finished then and now. FIFA threatened to drop it from the tournament in January, but an all-out effort by all those concerned saved the city's host status.

In response to questions about stadium costs and financing, the club offered a link to a video of a news conference held during Valcke's visit. In it, club president Mário Petraglia said Paraná state had agreed to "a new and final schedule of disbursements."

"I can't tell you numbers and values," Petraglia said. "I even think that we do not deserve it, for all the failings . . . and the promises not met during our journey."

There was little evidence of World Cup fever on the streets of Curitiba, except for a Coca-Cola advertisement on the side of a train car, despite the fact that world champion Spain will be headquartered in the city and will play Australia here.

A recent poll conducted by Paraná Pesquisas and published in the local newspaper Gazeta do Povo said that 57.5 per cent of respondents "disapproved" of the World Cup coming to Curitiba and that 87.5 per cent were against the use of public money to finish the stadium. And several people expressed similar sentiments on Curitiba streets.

"It is absurd. How much are we paying for four games?" said retired teacher Joselen Correa, 56, handing out leaflets in the city center to supplement her pension.

In late April, striking teachers set up an encampment outside Cunha's office.

"FIFA standard" education was a demand during Brazil's street protests last year, and striking librarian Renata Dias, 28, said the World Cup could expose Brazil's failings to the world. "We have some problems we need to show," she said.

Opposition to the World Cup also simmered during a meeting at Paraná Federal University, one of a series held to discuss World Cup issues, including the tournament's legacy.

So far, the only infrastructure work ready is an overpass that cost 48 million dollars, 5 million more than originally budgeted.

"Curitiba got a bridge," said Olga Firkowski, a geography professor and an outspoken critic of Curitiba's World Cup plans.

Cunha blamed negative media coverage for any sour mood and noted that all four games scheduled to be played in Curitiba have been sold out.

On the outskirts of town, construction to revamp the bus station was still going on, although a sign said work would be finished in October 2013. Ticket offices for half a dozen bus companies are being housed in shipping containers, and one of the two terminal buildings was still closed to the public.

Wilmar de Santos, 50, one of the construction workers, said that he was confident the work would be finished before the World Cup and that he had already bought his tickets. "It's going to be cool," he said.