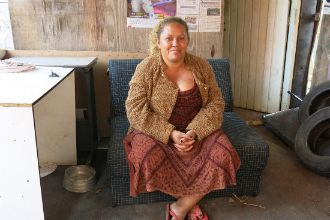 With her husband out of earshot, Queze Vicente told the story of the night he came at her with two knives in his hand.

"He was drinking," she said outside their one-room shack in a roadside slum near an airport here. "We fought. And I had to go to Dona Carmen."

Everyone in their community knows who Dona Carmen is and her method for getting abusive husbands in line. They call it "the discipline," and it includes a sex strike.

For 15 days, husbands who hit their wives are also banned from drinking in the local bar and playing soccer on the local field. And any man who helps an offender violate the rules is also subject to the sex strike.

Abused by her husband and saddened by the abuse all around her, Dona Carmen talked 12 local women into adopting the punishment routine. Two years later, the women and most of the men say it works.

"Everyone thinks it is good," said Vicente's husband, Renato. "There are no more fights."

The abuse in this community, a corner of the slum called Menino Chorão, or Crybaby Boy, was not unlike what many Brazilian women experience. In a survey conducted by the Patrícia Galvão Institute, which works on women's rights and communication issues, 54 per cent of Brazilians said they knew a woman who had been attacked by a partner and 70 per cent said they believed Brazilian women suffered more violence at home than in public spaces.

But change is slowly coming to this most macho of societies as activists such as Dona Carmen try to help women find new ways to combat domestic abuse.

"This is a theme that permeates the whole of society," said Julio Neto, a professor at Campinas State University whose department recently sponsored a forum at which Dona Carmen spoke. "Every Brazilian knows cases of violence against women."

Neto said the women in the group were forced to act because the state was not protecting them. "If they call the police, the police don't go." He said he did not condone cases in which some women had beaten up male offenders but that he supported "the discipline."

"It is very original. I think in this sense, it is marvelous," he said.

Dona Carmen, whose real name is Maria de Sousa, commands respect within her group: the fact that she is addressed as "Dona" — roughly equivalent to "madame" — is evidence of that.

Like most of her neighbors, she is from Brazil's poorer, more traditional northeast. For 13 years, she was married to a man who beat her persistently. One attack when she was five months pregnant caused her to miscarry twins. "My whole body had purple bruises from the beating he gave me," she said.

She arrived in the southeastern city of Campinas from her native Fortaleza eight years ago when a woman she had met tricked her with a promise of work and a place to live. As a result, she said, she spent 40 days in a brothel but escaped and did not have to work as a prostitute.

"I was desperate to get a job," said de Sousa, who has four children and now works in a kitchen at an advertising agency.

Before Brazil introduced a domestic violence law in 2006, some offenders were able to get off with fines or even by donating food baskets.

The law is named for Maria da Penha, a biochemist whose husband shot her while she was asleep in 1983, leaving her paraplegic, and then tried to electrocute her. After almost two decades of legal maneuvering, he was finally jailed in 2002 and served 16 months in closed prison and three more years in semi-open prison.

Da Penha fought hard for his imprisonment and campaigned for the law. "I was revolted with the sexism of the Brazilian judiciary," she said, talking by phone from Fortaleza, where she runs an educational institute.

The law set up special courts and police departments to deal with crimes against women, and stricter punishments. A special hotline was also set up to deal with cases of domestic abuse.

Da Penha, 67, said there has been major progress, but that these resources are still lacking in smaller towns and cities.

"Women who are victims of violence are slowly losing the shame they had to talk about this," she said. "Sexual equality is being conquered little by little, but there is still a lot to do."

Despite the tougher punishments for offenders, rates of violence against women remain high. In the first six months of 2013 alone, the hotline received 306,201 calls, of which 12.3 per cent were reports of violence

Brazilian women suffer inequality in other areas as well. In the World Economic Forum's 2013 Global Gender Gap report, Brazil placed 62nd in a list of 136 countries. In terms of wage equality, it came in 117th.

Lieli Loures, 35, an activist in São Paulo, said the Maria da Penha law was a watershed moment for Brazil, and that a grass-roots feminist movement is growing. "I perceive a change," she said. "Feminism is only beginning to be known."

In Crybaby Boy, the debate continued in the front yard of the small brick house where Maria Santos, 34 — one of women in Dona Carmen's group — lives with her husband, Adelmo, 31.

"We joke that the women are in charge here," she said.

Then he lowered his voice to a whisper: "The women here want to be the man. They can't."

But Geraldo da Cruz, 62, said most men back the scheme. "Everything organised is better, right? Important."