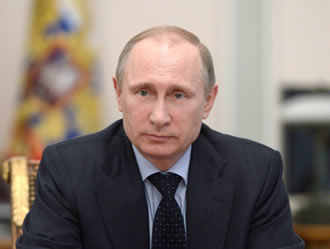 As Vladimir Putin completes Russia's annexation of Crimea, Azerbaijan is worried that his next move will be to shift his attention southward.

The Caspian Sea nation, the only westward route for central Asian oil and gas that bypasses Russia, is finding itself hemmed in by Putin's regional ambitions. Russian troops are already stationed in neighboring Georgia and Armenia and just four months ago, Putin said Russia will "never leave" the region.

That's stirring angst in a nation that was captured by Soviet Russia in 1920. Azerbaijan, the third-largest ex-Soviet oil producer, has spent the past two decades trying to establish itself as an alternative gas source to Europe. Home to the Shah Deniz field, in December the country struck a 45-billion-dollar deal with a BP-led group.

"If the West doesn't do anything to stop Russia, they will be emboldened to take back Azerbaijan by force as they did a hundred years ago," said Zahir Rahimov, a 39-year-old resident of Baku, referring to the Bolshevik takeover.

Officials already complain about feeling the Kremlin's pressure. The push from Moscow to join Putin's new customs union, a project he wants to rival the European Union, is similar to the squeeze put on Ukraine, according to Siyavus Novruzov, a senior member of the ruling New Azerbaijan Party.

Putin is extending Russia's reach as he tries to rebuild the prestige it lost after the end of the Cold War. To Azerbaijan's west, Russia has kept a base with about 4,000 soldiers in Armenia since a cease-fire in the Nagorno-Karabakh war in 1994. In Georgia to the northwest, Putin left forces stationed in Abkhazia and South Ossetia after a 2008 war.

"As for the Trans-Caucasus region, Russia will never leave this region," Putin said on 2 December after surveying Russian troops at the base in Armenia. "On the contrary, we will make our place here even stronger. We will strengthen our position here, drawing on the best of what our forebears left us and with the support of good relations with all countries in the region, including Armenia."

While Putin hasn't directly threatened Azerbaijan and an invasion is unlikely, his comments underscore the fact that he can use his influence in neighboring countries to hem in Azerbaijan, which has been ruled by the Aliyev family for four decades.

"Azerbaijan is going to be next after Ukraine," according to Arastun Orujlu, head of the Center for East-West Studies, a research group in the capital Baku. "Russia will step up pressure."

Azerbaijan's position is complicated by the fact that it never courted the US and the European Union the way that ex- Soviet satellites such as Poland and the Baltic states did. Azerbaijan hasn't applied to join either the North Atlantic Treaty Organization or the European Union and has instead pursued an independent foreign policy.

The country has forged closer ties with Israel by buying its advanced weapons including drones and missile systems and NATO-member Turkey, with whom it signed an agreement on military cooperation.

The existing accord with Turkey is limited to training and arms purchases by Azerbaijan. The nations are negotiating a broader military deal to guarantee mutual assistance in case of an attack, Novruz Mammadov, the head of the presidential administration's foreign-relations department, said on the ANS television channel on Sunday.

Azebaijan's strategy of plotting a course between Russia and the EU has left it "even more vulnerable to Russian pressure" to join the planned Eurasian Union, Richard Kauzlarich, the US envoy in Baku in 1994-1997, told the Azeri service of Radio Free Europe-Radio Liberty March 7.

While Putin has used the simmering conflicts in the Caucasus to keep Russia's southern neighbors "off-balance," putting at risk investments made in energy links binding Azerbaijan with Europe, such tactics have failed to undermine the projects, according to Matthew Bryza, the US ambassador to Azerbaijan in 2010-2011.

Even so, the country's unaligned status puts it in a precarious position as Putin challenges the post-Cold War world order, according to Vafa Quluzada, a former foreign policy adviser to ex-President Heydar Aliyev, the father of current leader Ilham Aliyev.

"After Crimea, there are no longer any rules of the game for Russia," Quluzada, the former presidential adviser, said by phone. "It can take unpredictable actions. Our strategic partners should bear this in mind and take action before it's not too late."

Aliyev, who has won plaudits from the US and Europe for striking an independent foreign policy, he hasn't been immune to international criticism, with his government ranked as one of the most corrupt and repressive in the world by Transparency International and Reporters Without Borders.

Dozens of activists, journalists, bloggers and other critics of Aliyev were arrested or convicted of "bogus charges" in the 18 months leading up to the presidential election last October, according to Human Rights Watch.

Regardless of the human rights violations, Azerbaijan remains a crucial energy supplier to several EU nations. Italy, which receives Azeri crude shipments via Turkey's Mediterranean port of Ceyhan, is Azerbaijan's biggest trade partner, according to data on the State Statistics Committee website.

Germany and France come second and third, with Russia in fourth place.

Oil and gas exports made up 95 per cent of total Azeri exports last year, according to the central bank. The 74-billion-dollar economy, the former Soviet Union's fourth biggest after Russia, Kazakhstan and Ukraine, grew 5.8 per cent last year and the International Monetary Fund forecasts a 5.6 per cent expansion this year.

Russia's main lever over Azerbaijan is its sway over Armenia, which it can use to ratchet up tension in the frozen Nagorno-Karabakh conflict, said Quluzada, the former foreign- policy adviser. That threatens to unsettle investors such as BP, which with partners has invested more than 40 billion dollars in energy projects in the past two decades.

"Russia wants the cease-fire — this no-war-no-peace situation — to exert pressure on Azerbaijan," Quluzada said. "It is also using the situation to keep western interests under constant threat."

Armenia, backed by Russia, took over the mountainous Nagorno-Karabakh region and seven adjacent districts from Azerbaijan. Large-scale hostilities ended with a cease-fire in 1994, with the sides yet to sign a peace agreement.

"What's happening in Crimea today first started in Nagorno-Karabakh," said Asim Mollazade, a member of Azeri parliament's foreign relations committee. "It was the same scenario with the same participants. Azerbaijan lost 20 per cent of its territory."

Georgia, the third South Caucasus country, was routed by Russia in an August 2008 war over the separatist province of South Ossetia in the biggest show of force outside its borders since the Soviet breakup in 1991 until the Crimea conflict.

Russia has an agreement to provide military assistance to Armenia. In 2012, troops from Russia and four ex-Soviet republics took part in maneuvers in the country, the biggest military drills ever hosted by the landlocked country, according to IHS Global Insight in London.

"Russia can attack Azerbaijan from three fronts: from Karabakh, from the border in Dagestan and by sea," Quluzada said. "Russia is holding drills in Dagestan and the Caspian Sea. It has modernised its Caspian fleet. It's clear that Russia isn't preparing for a war with Iran. Our strategic partners should bear this in mind and take action before it's not too late."

While the crisis in Ukraine will further propel Azerbaijan to solidify ties with the West, it expects Russia to lash out against it in response, according to Mollazade.

"Regrettably, Russia is seeking the restoration of the former Soviet Union through the customs union and the planned Eurasian Union," he said.

With assistance from Sara Khojoyan in Yerevan, Armenia, and Anna Andrianova in Moscow.