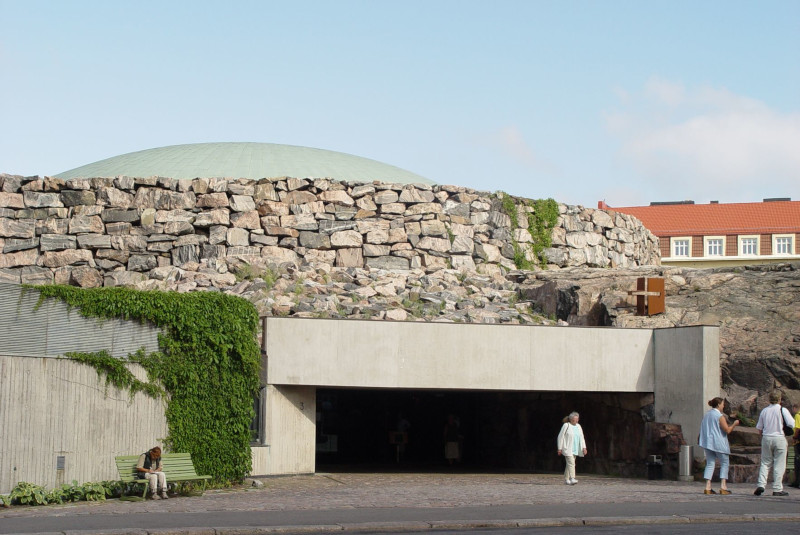 The entrance to the Temppeliaukio Church, also known as the Rock Church, a key underground attraction in Helsinki/Wikipedia

Helsinki’s underground tunnel network was the subject of discussion this week in an article published by travel and tourism website TravelPulse. Below Finland’s capital lies a vast labyrinth of passages and buildings used for retail, sports and cultural activities.

Helsinki first began digging up its surface in the 1980s during the Cold War, with the aim of creating a subterranean space that could contain the city’s entire population in case of an attack.

Now, the network of tunnels—considered one of the largest in the world—houses, among other things, a swimming pool, a go-kart track and an ice hockey rink and provides safe passage for pedestrians in winter.

Proposed changes to Finland’s Lotteries Act, which regulates gambling in the country, made headlines this week. The amendments could mean a ban on slot machine ads and payment blocking for gambling companies other than the state-owned monopoly Veikkaus.

The new bill would also mandate ID verification, which has already been launched on Veikkaus’s slot machines, for all forms of gambling available in the country. Additionally, it calls for machines to be placed in venues that enable easy monitoring.

Veikkaus was recently compelled to introduce compulsory loss limits for slot machines as part of a corporate social responsibility programme aimed at preventing customers from losing significant amounts of money to gambling.

In other news, Swedish construction company Skanska has signed a contract to build Finland’s largest hotel. The 37,800-square-metre hotel will be located next to the Helsinki Airport in Vantaa and will include 700 rooms, five restaurants, conference venues and recreational spaces.

The contract for the hotel, which will be named the “Comfort Hotel” is worth 86 million euros. Construction is set to begin in October 2021 and is scheduled to be completed in the first quarter of 2024.

Photovoltaic trade magazine Pv Magazine reports that Finland is in the process of setting up a huge solar park that will generate 500MW of solar power.

The park will be situated across 500 hectares of abandoned peatland in Palloneva, Southern Finland. Finnish authorities are currently reviewing the project, which is being developed by an international consortium under a special-purpose entity.

Finnish smartwatch manufacturer Suunto made waves this week when it launched a new fitness watch. The Suunto 9 Peak is made of titanium and has been described as having a sleek “Nordic design.”

Available in four colours and two different styles, the watch is the company’s thinnest and lightest yet and offers longer battery life than previous models. While it has been praised for its appearance and for being comfortable, the watch’s operating system has been criticised by reviewers.

Helsinki first began excavating the area below its surface in the 1980s, creating an intricate network of subterranean tunnels to safeguard its population from potential attacks during the cold war.

Now, nearly 200 miles of the underground space are used for a wide range of services, including car parks, pedestrian routes and attractions such as the Temppeliaukio Church and the recently constructed Amos Rex art museum.

Finland is currently developing plans for an underground route that would connect the cities of Helsinki and Tallinn, Estonia across the Gulf of Finland.

Original story was published by TravelPulse on 28.09.2021 and can be found here.

The Finnish government has proposed several amendments to the Lotteries Act, which regulates gambling in the country. The suggested changes include the introduction of  payment blocking for gambling companies that are not regulated.

The new bill calls for mandatory ID verification to be extended to all forms of gambling, and could also impose restrictions on how gambling products are marketed. Advertising would be banned for games that are considered especially harmful, including those on slot machines.

Additionally the state-run gambling monopoly Veikkaus would be required to shift its machines to venues that can be easily monitored and prepare a self-monitoring plan ensuring the prevention of harmful behavior.

Original story was published by iGaming Business and Casino News Daily and can be found here and here.

Skanska, a construction and development company based in Sweden, has signed an 86-million-euro contract to build what will be Finland’s largest hotel next to the Helsinki Airport in Vantaa.

The hotel will span around 37,800 square metres and will be run by the Nordic Choice Hotels, which operates establishments such as Clarion Hotel Helsinki.

It is expected to get a LEED Gold Certification. The LEED green building rating system measures the sustainability and efficiency of buildings.

Original story was published by MarketScreener and Global Construction Review and can be found here and here.

The group also plans to set up a 45-MW wind power facility in the area, which consists of 500 hectares of abandoned peatland, and seeks to invest a total of 400 million euros in both plants.

Original story was published by Pv Magazine on 29.09.2021 and can be found here.

Finnish sports watch manufacturer Suunto’s latest product, the Suunto 9 peak, has captured the attention of tech reviewers for its stylish and lightweight design. The device is considerably lighter than competitive products such as the Apple Watch.

However, while the extended battery life and data capture function have generated some praise, users have criticised the watch’s small screen, swipe controls and inability to incorporate third-party apps.

Original story was published by 9News and ChannelNews and can be found here and here.