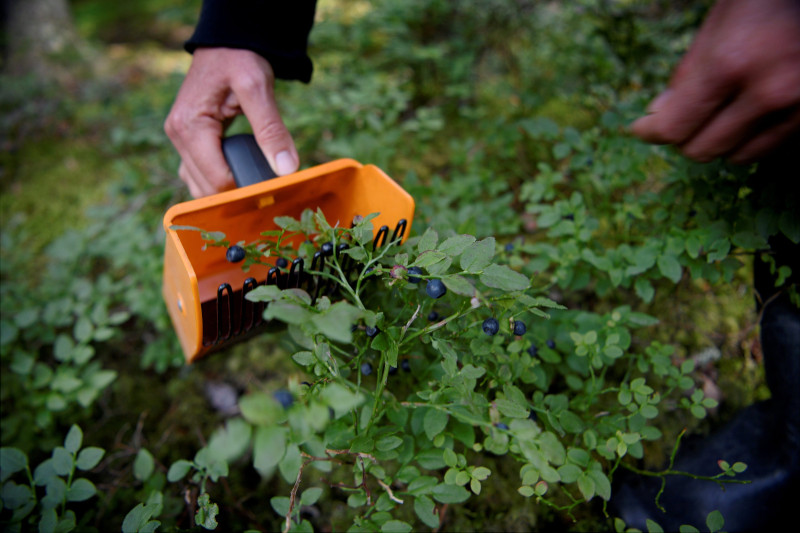 This year, 3,500 Thai berry pickers arrived in Finland to help with the harvest/Lehtikuva

The news that Finnish scientists accidentally unleashed butterflies that contained parasitic wasps created a buzz this week, with several international newspapers, including The Guardian and Independent covering the story.

Researchers had introduced a new kind of caterpillar to a small island in the Åland archipelago in the hopes of studying the behaviour of the beautiful Glanville fritillary (Melitaea cinxia) butterflies once they emerged.

The females of the larger wasps also carried a bacterium, Wolbachia pipientis, bringing the total number of new species introduced to the island to three.

Finland’s conduct with regard to foreign berry pickers was questioned in an article published by Euronews on Thursday. The article outlines the controversies associated with berry picking—one of the country’s most disreputable industries—in light of the recent COVID-19 outbreaks.

It also examines how authorities handled the situation and what they could do to prevent further catastrophes. Around eight berry farms in Finland have reported COVID-19 infections, with a total of 400 cases among Thai berry pickers.

Unlike Sweden, Finland’s current laws regarding foreign gatherers of natural foods leave room for abuse and enable firms to exploit the berry pickers, who are not considered employees, but private individuals.

An all-female Finnish company was in the public eye this week after British newspaper Sifted published a piece about the research team’s attempts to cure blindness through stem cell therapy.

A Tampere University spinout, StemSight has been developing a method of regenerating eye cells using stem cell technology. The treatment can be used to heal corneas and cure blindness in certain cases.

The team is currently focusing on treating blindness caused by damage, such as burns or trauma, on the surface of the cornea. The method of treatment involves reprogramming cells (taken from the blood of a healthy donor) to self-regenerate once they enter the patient’s eye.

In other news, Finland and Hungary have agreed to collaborate on space research. Representatives of the countries signed a memorandum on space industry cooperation in Helsinki on Tuesday.

Hungary’s Minister of Foreign Affairs and Trade Péter Szijjártó said the agreement would enable Hungarian researchers and companies to work closely with their Finnish counterparts in the fields of space research, Earth observation and vehicle navigation technology.

Meanwhile, the Finnish government is launching an anti-racist campaign that encourages citizens to act against discrimination. The Ministry of Justice and the Equality Commissioner introduced the Olen Antirasisti (I am Anti-racist) campaign earlier this week on Monday.

The initiative specifically targets Finland’s youth, and urges them to think critically about the existing systems of oppression and bias in the country. The campaign’s website includes advice and tips on how to tackle racist behaviour.

Finnish researchers have unwittingly released three new species, two of them parasitic, on Sottunga, an island municipality of Åland. The scientists first introduced caterpillars of Glanville fritillary butterflies to the island 30 years ago.

The larger wasps carried a third species, a bacterium known as Wolbachia pipientis, which makes them more susceptible to the Mesochorus cf. stigmaticus. Surprisingly, all three species have managed to survive on the island thus far. The Hyposoter horticola wasp has even been discovered on other islands in the archipelago.

Original story was published by The Guardian and Independent and can be found here and here.

The recent COVID-19 outbreaks among foreign berry pickers have drawn attention to Finland’s current laws, which do not provide adequate protection for the seasonal workers.

The berry pickers are often exploited by firms, made to live in substandard conditions and not provided with adequate medical care. Investigations into who is to blame for the rapid spread of COVID-19 among workers are ongoing, with Thailand demanding an explanation for the same.

The Finnish Ministry of Economic Affairs and Employment has introduced a new law aimed at improving the legal position of foreign seasonal workers. Additionally, a working group is developing ideas on how to improve the living conditions of the camps that house the pickers while they are in Finland.

Original article was published by Euronews on 16.09.2021 and can be found here.

Finnish healthtech company StemSight has been researching a method of regenerating cornea cells in the eyes to cure blindness. The company recently received 500,000 euros in funding from deep tech investors Voima Ventures and Avohoidon Tutkimussäätiö.

The all female-team has been working on a stem cell treatment for corneal blindness, a presently incurable condition that disproportionately affects young people (the average age of patients is 34).

The EU sees 300 new cases of the condition every year. The stem cell treatment is currently being tested on animals and is expected to reach clinical trials in 2025.

Finland and Hungary to cooperate on space research

Finland and Hungary have signed an agreement to work together in the fields of space research, Earth observation and research and development for vehicle navigation technology.

Péter Szijjártó, Hungary’s minister of foreign affairs and trade, signed a memorandum of understanding on space research and astronautic activities with Finnish Economy and Labour Minister Ilona Lundstrom in Helsinki on Tuesday.

Original story was published by Hungary Today and Budapest Business Journal and can be found here and here.

Finland’s Ministry of Justice, along with the Equality Commissioner, has launched an anti-racism initiative aimed at encouraging people to take action if they witness racist behaviour and discrimination.

The campaign website stresses that the onus of educating people about racism should not fall on victims themselves, and that equality should be a goal that society should strive for as a whole.

It also offers advice on how to combat discrimination in everyday life for organisations as well as individuals. As per the website, the primary aim of the campaign is to help create a “racist-free Finland.”

Original article was published by theMayor.eu on 16.09.2021 and can be found here.