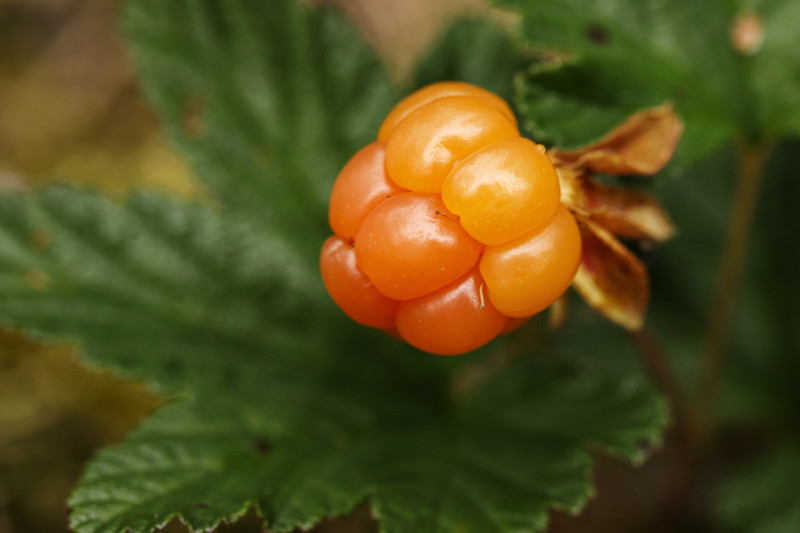 A rare cloudberry in a swamp in Hyvinkää, Uusimaa in July/Lehtikuva

Finland’s reverence for cloudberries or “lakka” came into focus this week when National Geographic published an article about the age-old Finnish practice of mindful wild berry picking in summer.

Respect for nature and contemplative silence are ideals that are deeply ingrained in Finnish culture, with Finns seeking quiet, meditative solitude in forests long before the concept of “forest bathing” emerged.

Ranua, a small town located in Lapland, is known as Finland’s “cloudberry capital” and offers visitors the opportunity to forage for the elusive and highly-valued amber-coloured fruit, which is only available in late July and early August.

The international media also revealed that Finland is set to begin testing an autonomous train project that will enable it to double freight traffic while also reducing emissions.

The initiative, which is led by Finnish rail operator Proxion, is currently entering the pilot phase. The autonomous battery-powered train moves at 20 km/h and has a range of up to 20 km.

Forest industry company Stora Enso and steel company Outokumpu are part of the project, which also aims to improve operating conditions in the wood and metal processing industries. The train will eventually transport goods as well as passengers.

According to UK-based Pensions Age magazine, Finland’s pension system has topped the global rankings for 2021. As per an analysis by Blacktower Financial Management, Finland’s government allocates a significant amount of funding for pensions.

Additionally, a whopping 89.8 per cent of the country’s population pays into a pension. The analysis used metrics such as public expenditure, average retirement age and the degree of participation in pension schemes to evaluate pension systems around the world.

The project will include 36 wind turbines and will likely be operational by the end of 2023. The Alajärvi wind farm is expected to be one of the largest unsubsidised wind farms in Europe.

Meanwhile, Finnsh start-up Innomost has raised 5 million euros to develop a sustainable alternative for non-eco-friendly ingredients such as palm oil and fossil fuels in consumer products.

The company uses bioactive ingredients such as bark from Nordic birchwood to create innovative, environmentally friendly products for the cosmetics industry. Its goal is to set up a production facility that can manufacture 20 tonnes of birch bark products per year by 2023.

Cloudberries, known as “lakka” or “hilla” in Finnish, have been drawing visitors—some who drive for hundreds of miles—to the small town of Ranua in Lapland, which hosts an annual cloudberry festival in August.

Many Finns walk for several hours or even days in silent solitude to pluck the rare berries, which grow in mosquito-infested swamps and contain copious amounts of antioxidants and vitamin C.

Cloudberry apps and maps enable visitors to locate ideal foraging spots, and during peak season, locals find several innovative uses for the amber fruit, which features in everything from wine to cosmetics.

Original story was published by National Geographic on 09.08.2021 and can be found here.

Finland’s autonomous rail freight service project is entering the test phase after receiving funding. The goal of the project is to develop advanced railway transport services, with the ultimate aim of doubling the amount of freight traffic in the country.

Original story was published by Electronic Design and IceNews and can be found here and here.

Finland has the best pension system in the world, according to an analysis by British financial services company Blacktower Financial Management. The company used metrics such as average pension contributions and public expenditure to compare pension systems around the world.

Finland’s high public spending on pensions, coupled with a high percentage of residents paying into pension, granted it the top spot on the list. Poland got the second place, followed by Sweden, which ranked third.

Original story was published by Pensions Age on 12.08.2021 and can be found here.

Innomost, a Finnish start-up that specialises in producing ethical and environmentally sustainable ingredients for the cosmetics and personal care industry, has received 5 million euros in funding to expand to new markets.

The company, which was founded in 2016, will use the capital to build a pilot plant in Kokkola (Central Ostrobothnia), and will also invest in R&D and focus on expanding its customer base.

Original story was published by EU-Startups on 10.08.2021 and can be found here.

It will also be one of the largest unsubsidised wind farms in Europe. Ilmatar Energy has plans to build three other onshore wind farm sites in Finland.

Original story was published by Power Engineering International and can be found here.