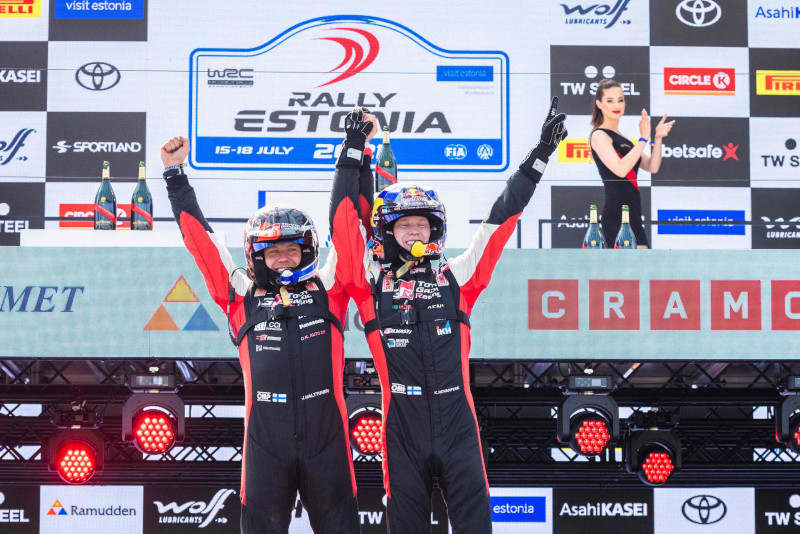 Finnish rally driver Kalle Rovanperä made history this week when he became the youngest-ever winner of a World Rally Championship (WRC) event.

The 20-year-old, who drives for Toyota, beat Hyundai’s Irish driver Craig Breen by 59.9 seconds at the rally, which was held in Estonia on Sunday. Rovanperä’s father is also a former WRC rally winner.

The record for youngest winner was previously held by Rovanperä’s current team boss and fellow Finn Jari-Matti Latvala, who won the Sweden rally in 2008 at the age of 22.

A photo circulating on social media featuring a reindeer with glowing antlers caused a stir this week when it was suggested that it formed part of an experiment conducted by the Finnish government.

The viral post, which was first shared on Facebook on July 9, claimed that Finland painted reindeers’ antlers with reflective paint in a bid to make the animals more visible to motorists and thereby reduce road accidents.

While multiple myth-busting websites proved that the photo is not real, and is in fact, a 3D artwork created by visual designer Vasjen Kastro, the story is true. Finland’s Ministry of Agriculture and Forestry experimented with spraying reindeer fur and antlers with reflective paint in 2014.

The international press also reported that business owners in Finnish Lapland are expecting a surge in tourism since travel restrictions have been eased, with many hoping that Finnish Lapland will be viewed as a safe destination.

The tourism industry in Lapland is fairly new, with a growing number of travellers visiting the region only in the last 20 years or so. Tourist-driven businesses in municipalities such as Inari have been hit hard by COVID-19 restrictions, which have severely limited the number of international visitors.

According to British tabloid The Daily Mail, Finnair is set to trial a new “travel pass” app, which allows passengers to carry a digital copy of their passport, covid test results and entry documents on their phone to enable easy checking, at London’s Heathrow Airport.

Finland’s flagship airline will debut the app, developed by the International Air Transport Association (IATA), on flights between London and Helsinki this week. The trial will proceed for three weeks between now and mid August.

Meanwhile, Finnish contract manufacturer Valmet Automotive has signed on to begin manufacturing a solar-powered electric car, the Lightyear One.

The first prototype of the car, which was designed by Dutch startup Lightyear, was introduced in 2016. The Lightyear One reportedly has a range of 725 km, can generate about 12 km/hour with solar cells embedded in the roof and costs around $165,000.

20-year-old Finn Kalle Rovanperä became the youngest-ever driver to win a WRC rally when he and co-driver Jonne Halttunen emerged victorious at Rally Estonia on Sunday.

Rovanperä, who beat Hyundai’s Craig Breen by 59.9 seconds to win the event, is the son of former WRC champion Harri Rovanperä, who won the rally himself in 2001.

The young motorist described the event in Estonia as “almost a home rally” and expressed gratitude for the support he received from fans.

Original story was published by motorsport.com on 18.07.2021 and can be found here.

The photo has since been proven to be fake, and is the work of visual designer Vasjen Kastro, who was inspired to create the 3D illustration after reading an article about the experiment.

The story associated with the image is true; however, as Finland's Ministry of Agriculture and Forestry tried using a special reflective paint on the fur and antlers of reindeer to prevent traffic accidents in 2014. While the experiment proved unsuccessful, an app introduced by the government bore better results.

Original story was published by USA Today and can be found here.

Business owners in Finnish Lapland are awaiting a surge in tourism following a period of uncertainty and heavy losses due to constantly changing travel restrictions. Many have expressed disappointment at the lack of adequate support offered by the government.

While domestic tourism in Lapland picked up this year, bringing much-needed relief to the region, a lack of international visitors during winter will likely lead to several businesses going bankrupt.

Original story was published by The Barents Observer on 18.07.2021 and can be found here.

Finnair is planning to trial a “travel pass” app developed by IATA (the International Air Transport Association) on flights between the Heathrow airport in London and Helsinki for three weeks. The trial will be monitored by the Finnish government.

The app enables travellers to keep a digital version of their passport, along with travel documents and covid test results in one place—that is, their phone—to cut down waiting, check-in and boarding times.

The Finnish airline is encouraging customers and crew to provide feedback during the trial to support the further development of the app.

Dutch startup Lightyear has teamed up with Finnish contract manufacturer Valmet Automotive to further develop and manufacture the Lightyear One, a solar-powered electric vehicle. The companies plan to start building prototypes in early 2022.

Lightyear claims to have spent more than a year looking for the right manufacturing partner. Valmet, which is co-owned by the Finnish government and a large private equity group, has made cars for Saab, Mercedes-Benz and Porsche in the past.