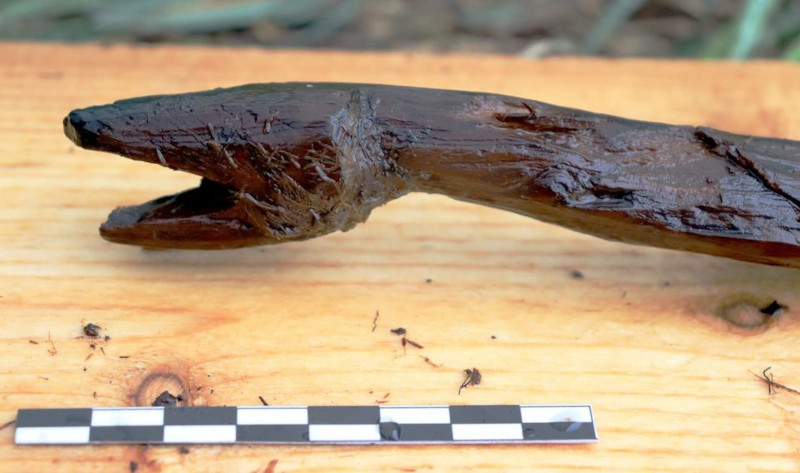 A snake-like sculpture dating back to the stone age, which was unearthed in Finland last year, has received significant attention from international news outlets this week.

The 4,000-year-old, 21-inch-long relic was discovered at the Järvensuo I site in Southwest Finland and was carved to reflect the serpentine curves and likeness of a snake. Researchers at the University of Turku note that such a finding is rare for Neolithic Northern Europe, as figurines of animals like waterfowl or elk are more commonly excavated.

Experts are still attempting to decipher the purpose of the wooden sculpture, with some suggesting it could have once been a shaman’s staff. Snakes were considered “spirit-helper animals” of the shaman, who was believed to have the ability to transform into one.

American e-commerce giant Amazon announced on Thursday that it is planning to build a new centre to support the development of its autonomous delivery technology in Helsinki.

The centre will have two dozen engineers working on Amazon Scout, a fully-electric autonomous delivery robot currently being tested in the U.S.

The vehicle, which is approximately the size of a small cooler, is capable of transporting small packages at a walking pace along streets.

The competition was originally set to take place in China, but had to be moved after the country had to impose entry restrictions due to COVID-19 concerns.

The finals are expected to be held in the week of September 26 to October 3, with a gap of one week between these matches and back-to-back tournaments taking place in Denmark.

Meanwhile, the city of Helsinki is encouraging cyclists to earn money by providing information about the condition of city streets. To do this, cyclists need to download a free app titled Crowdchupa.

They can then attach their phone, which will record footage of the streets, to their bicycle. The app’s artificial intelligence system will identify and alert the municipality about any streets that need to be repaired.

Cyclists can also earn money through the app by collecting virtual objects (such as various fruits) from the street map, which are then converted to monetary rewards.

In other news, Finnish mobile game company Boom Corp has received $1.8 million in funding to produce social games, that is, games that encourage players to interact with each other.

The studio, which has only eight employees as of this year, is based in Tampere, Southern Finland, and was established in 2020. Boom Corp’s founders have previously worked on game titles such as Angry Birds and Badland.

A 4,000-year-old wooden sculpture found in Southwest Finland last year could have been a stone age shaman’s staff, researchers say. The unique relic was discovered a foot and a half deep in peat at the Järvensuo I site.

The site, which was accidentally discovered by ditch diggers in the 1950s, has yielded various artefacts, including pottery and fishing equipment, dating back to between 4,000 and 2,000 years ago.

Original story was published by National Geographic on 29.06.2021 and can be found here.

U.S.-based tech company Amazon has announced plans to build a new development centre in Finland that will focus on Amazon Scout, a fully-electric autonomous delivery robot that can transport small packages.

The development centre, which will be situated in Helsinki, will collaborate with the company’s teams at its Seattle, U.S., Tubingen, Germany and Cambridge, UK locations.

The Badminton World Federation (BWF) has announced that the 2021 finals of its biannual Sudirman Cup championship will take place in Vantaa, Southern Finland.

The mixed team badminton tournament was initially set to be hosted by China, but had to be shifted after the country shut its borders due to coronavirus concerns. The BWF has had to postpone or cancel numerous tournaments due to happen this year due to the ongoing pandemic.

Original story was published by Inside the Games on 29.06.2021 and can be found here.

The capital city is using Crowdchupa, a crowdsourcing data collection platform, to collect information on streets that require repairs.

The free app maps pedestrian paths and bicycle lanes via phone cameras. Once cyclists attach their phones to their bicycle they will also be able to earn money by riding over and collecting random objects that appear on the street map.

According to the CEO of Crowdchupa, the app lets cyclists earn approximately 2 euros per km. The platform will also be used to monitor street conditions in the cities of Tampere, Vaasa, Kuopio, Vihti, and Paimio.

Original story was published by TheMayor.eu on 28.06.2021 and can be found here.

The female-led company, whose stated aim is to produce games that bring people together,  launched its debut title Boom Slingers, a turn-based battle game, in December.

Original story was published by Gamasutra on 25.06.2021 and can be found here.