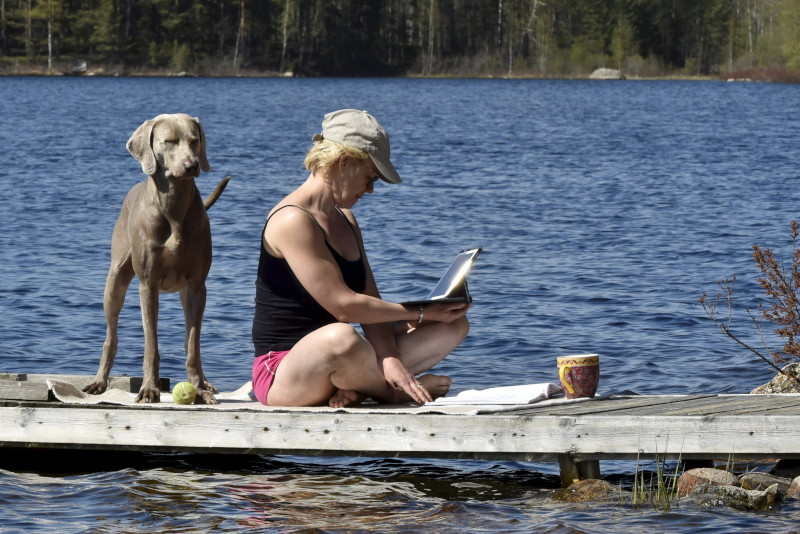 A woman works remotely while on a lake with her dog in Kouvola, Southeastern Finland/Lehtikuva

According to reports by the international media, Finland needs to practically double its current immigration levels to meet a potentially critical workforce shortage.

The country has the second-highest aging population in the world, which means that it needs 20,000–30,000 immigrants a year to prevent a pension deficit and meet the need for public services.

However, anti-immigrant sentiments, coupled with a reluctance to hire foreigners and a burgeoning far-right movement, have compelled several skilled workers to leave Finland.

Finland’s enduring fixation with Summer cabins or “mökkis” was also in the spotlight this week, as a significant number of Finns have been working from their holiday homes during the pandemic.

According to the Mökkibarometri 2021 survey, nearly half of those working from home in the country have done so from their cabins. In comparison, the corresponding number five years ago was just 7 per cent.

Additionally, the demand for second homes has risen substantially, with 47 per cent more shoreside cabins sold in the first four months of this year compared to the same period last year. The National Land Survey, which collects data on real-estate purchases, reports that the average price of Finland’s Summer cottages has increased by a fifth.

This week, the foreign press revealed that Finland will soon join a growing number of countries that deploy remotely piloted drones to enhance maritime surveillance and security.

The Finnish Border Guard will utilise the Remotely Piloted Aircraft System (RPAS), developed and operated by the European Maritime Safety Agency (EMSA), from the Hanko base on Finland’s South coast.

The system will improve the efficiency of tasks and operations such as search and rescue, border control, pollution prevention and maritime law enforcement.

Finnish telecoms giant Nokia was in the news for its decision to allow employees to work from home for three days a week after its current remote working policy ends in December.

A majority of employees surveyed at the end of last year said they would prefer to work from home thrice a week, compared to two days a week before the COVID- 19 pandemic.

Meanwhile, tech giant Amazon has announced plans to invest in a wind farm in Finland, which is expected to begin operations next year. This would be the company’s first wind farm in the country.

Finland is currently facing an acute shortage of skilled labour, with nearly 40 per every 100 working-age people in the country over the age of 65.

While immigration levels have remained consistent over the past decade (15,000 more people entered the country than left in 2019), the inability to get their qualifications recognised and a tendency to prioritise native applicants has proved discouraging for non-Finns.

Numerous Finnish start-ups have introduced programmes to attract foreign talent and facilitate relocation. However, spouses frequently face challenges when finding or applying for a job.

Original story was published by Philstar Global on 22.06.2021 and can be found here.

Work-from-home transforms to work-from-mökki in Finland

Finland currently accounts for the highest share of employees who work from home in Europe, and a rising number of remote workers in the country are turning their Summer cottages into offices.

While nearly half of remote workers in Finland now use cabins, usually situated in peaceful, verdant locations, two-thirds have said they would prefer to work from there for longer periods, and another quarter revealed that they would consider it.

Around half the population in the country currently has access to holiday homes, while all households were able to connect to high-speed 4G broadband at the end of last year.

Original article was published by Bloomberg on 18.06.2021 and can be found here.

Finland plans to use a remotely piloted drone system to strengthen and assist coast guard operations along the Baltic coast. EMSA’s Remotely Piloted Aircraft System (RPAS) will enable authorities to support activities such as border and customs control, environmental protection and search and rescue.

The Finnish Border Guard will also use the remotely operated aircraft to share key information and data with Sweden and Estonia to enable better cooperation and coordination in maritime issues.

The CAMCOPTER S100 model aircraft is capable of launching and landing from an area smaller than 5m x 5m. It also has a flight endurance of more than six hours, along with a range of over 60 miles.

Original story was published by the Maritime Executive on 23.06.2021 and can be found here.

Finnish telecommunication and IT company Nokia announced that it will permit employees to work remotely up to three days a week, while providing additional support for flexible working hours from January onwards.

Nokia’s current work-from-home policy, which has been implemented during the COVID-19 pandemic, will come to an end this December.

American multinational tech company Amazon will invest in a wind farm in Finland. The farm, which will be located near the country’s west coast, will generate 52 MW of energy.

It is expected to begin operations sometime next year. Amazon has also announced plans for additional sustainable projects in the US, Canada and Spain, and is currently the largest corporate buyer of renewable energy in Europe.

Original story was published by Montel News on 23.06.2021 and can be found here.