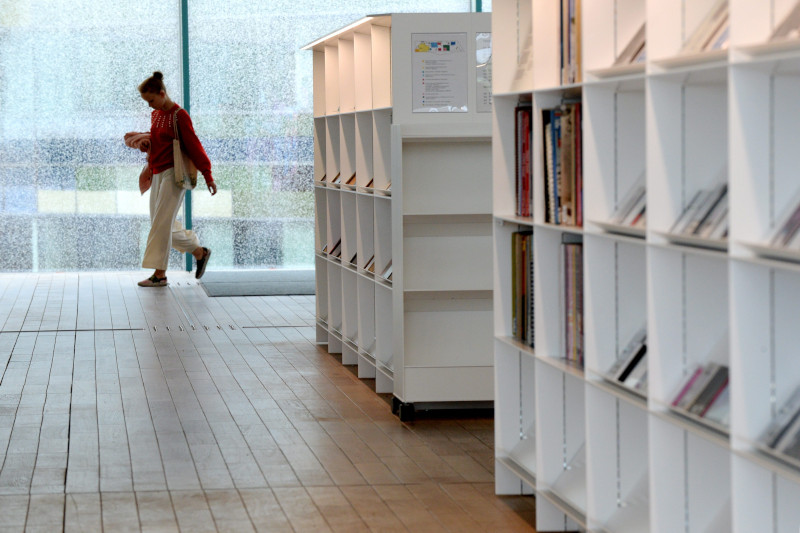 A visitor at the Helsinki Central Library Oodi/Lehtikuva

Finland’s library culture was in the spotlight this week, with Helsinki’s latest addition Oodi receiving special attention. The government invested 98 million euros in the central library, which received 3.1 million visits in its first year alone.

Finland’s Library Act, which aims to make culture and learning accessible to everyone, guarantees that libraries are free and open to anyone who wishes to use them.

The country, which earned the title of most literate nation in the world in 2016, is proud of its libraries, which are often regarded as safe and comfortable spaces and offer not just books, but a wide variety of services and tools.

The international press also reported that Finland will collaborate with Japan to develop 6G technologies. Industry groups from both countries will join forces to help create global standards and regulations for the emerging technology.

Japan’s Beyond 5G Promotion Consortium signed an agreement with the University of Oulu at the Global Digital Summit 2021 in Tokyo on Tuesday.

Finnish telecom giant and industry leader Nokia has reportedly signed up for the initiative. The Japanese government allocated $2 billion worth of investments for the development of 6G technologies earlier this year.

Also in the news this week was the significant drop in Finland’s heart attack rate last year. Doctors speculate that the COVID- 19 pandemic could be at least partially responsible for the 30 per cent decrease in myocardial infarctions—also known as heart attacks—in the country.

The Finnish Institute for Health and Welfare (THL) has begun studying the phenomenon to determine its cause. Cardiologist Mika Laine believes the decline in heart attacks can be attributed to changes caused by the pandemic, in particular the switch to working from home.

Remote working has enabled people to avoid traffic, which can be a major trigger for stress. Other factors, such as decreased smoking and improved air quality due to the lockdown may have also contributed to the decrease in heart attack cases.

Meanwhile, Finland’s green capital Lahti made waves this week when it introduced a new service that enables its employees to add wilderness scenes to their video calls.

The city-run Lahti Green Screen service, which uses real-time footage from woodlands, can be used in all Microsoft Team virtual meetings and is part of a trial to assess the potential benefits of the presence of nature in worklife.

In other news,  Finnish early education company HEI Schools has signed an agreement to develop a teacher diploma programme in Malaysia. The company will partner with Malaysia’s SEGi universities and colleges to implement the same.

Finland prizes its libraries and literary culture, with its government committed to encouraging easy access to books and culture through public spaces. The state invested 98 million euros in Oodi—a new central library in Helsinki that opened in 2018.

In addition to books, libraries in Finland offer a wide range of services and items, including sewing machines, videogames and musical instruments. Finns are fond of libraries, checking out over 68 million books per year.

The government offers numerous grants to support writing and literature. Finnish writers also receive a percentage of royalties (which can be as much as the royalties they receive from sales) every time a book by them is borrowed from a public library.

Mobile technology organisations from Finland and Japan have agreed to team up to promote the research and regulatory developments of 6G technologies.

A number of major industry players from various countries, including China and the US, have launched 6G research projects aimed at advancing the technology within the next five to ten years.

Original story was published by Mobile World Live on 9.06.2021 and can be found here.

Finnish doctors believe that the COVID- 19 pandemic could have indirectly led to a positive outcome for patients with heart conditions, as the number of heart attacks in the country dropped by one third in 2020.

Mika Laine, a cardiologist at Helsinki University Central Hospital attributes this to the lifestyle changes brought about by the pandemic. Remote working, for instance, could have lowered stress for several heart patients.

Additionally, smoking rates in Finland declined due to the association between smoking and severe COVID mortality. Better air quality in cities and towns as a result of the lockdown could have also played a role, as airborne particles are a risk factor for heart disease.

The Finnish city of Lahti has introduced a service which allows its employees to add live recordings of wilderness to video calls. Lahti Green Screen uses footage taken from two cameras placed in nearby woodlands.

Lahti, named the European Green Capital of 2021 by the EU Commission, has used the service for multiple official events already, including its water-themed panel discussion held during EU Green Week.

The Green Screen concept is based on research that suggests displaying connections to nature could boost decision-making and increase the likelihood of more environmentally-conscious choices.

Original story was published by Green Queen on 10.06.2021 and can be found here.

Finland-based HEI Schools has signed an agreement with Malaysian higher education provider SEGi to develop a teaching programme based on the Finnish early education model.

SEGi University and Colleges plans to utilise content from the programme in the 2.5-year ECE Teacher Diploma course it offers in three college campuses (Kuala Lumpur, Subang Jaya and Penang) from June 2021 onwards.

Original story was published by ScandAsia on 08.06.2021 and can be found here.