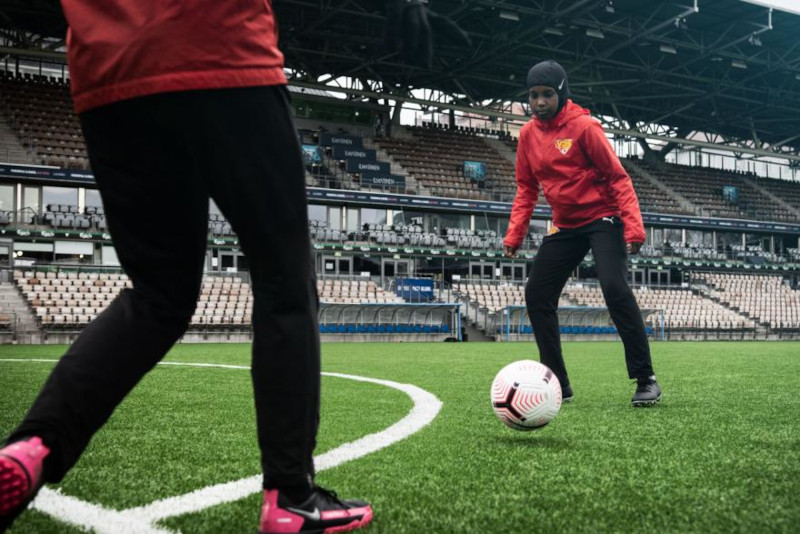 The National League (Kansallinen Liga), Finland’s top division of women’s football, graced headlines this week when it announced plans to provide a sports hijab to any player that requests one.

Until now, football teams in Finland offered children kits, socks and shorts. The addition of hijabs is aimed at increasing inclusivity and making the sport more accessible to members of all communities and religions.

The project was planned with Sara Salmani, one of Finland’s leading diversity, equity and inclusion specialists, and is a collaboration with Nike. The initiative has been praised as a progressive move in light of recent bans on hijabs and other religious garments in European countries such as France.

The Finnish city of Lahti was also in the spotlight this week for its attempts to become carbon neutral by 2025, which is 10 years ahead of the national aim for carbon neutrality.

The Southern Finland city was selected as the 2021 European Green Capital due to its ambitious environmental goals and sustainable projects, which include two new power systems that run on waste.

Lahti has replaced coal with biomass as its main source of fuel. Additionally, it has introduced a smartphone app through which citizens can measure their carbon footprint. The Lahti Symphony Orchestra has also received accolades for its attempts to become carbon neutral.

While children would previously spend time watching television in the morning before heading to school, they now use TikTok. The data indicated a clear spike in the usage of the platform between 7 am and 8 am, which was not seen in other forms of social media.

As per a recent survey conducted by DNA, one in five children aged 5–12 use TikTok, which is one of the most widely downloaded applications globally,  daily or several times a week.

In other news, Finland has awarded its Millennium Technology Prize to two UK-based chemists who have developed a revolutionary, super-fast method of sequencing DNA.

The one-million-euro biennial award is considered equivalent to the Nobel prize, but for technology. The Next-Generation DNA Sequencing technology (NGS) has numerous applications, from strengthening defence against diseases like COVID-19 to enhancing food production.

Meanwhile, Helsinki has launched an international competition to transform the Makasiiniranta area of the historic South Harbour into a cultural hub. The city has called for proposals from construction, architecture and real estate firms.

The proposals must include plans for a design and architecture museum complex. The Makasiiniranta area is currently the only section of the harbour that is cut off from public use.

Finland’s top women’s football league, the National League, plans to offer players sports hijabs along with other equipment. The move is aimed at promoting equality and diversity in football.

According to Heidi Pihlaja, head of women’s football development at the Football Association of Finland, the league hopes that other sports associations will follow their example.

The football association removed the word “women” from the national league last year to challenge existing regressive attitudes in sports. It also announced equal pay for male and female football players who represent the country in 2019.

The small, Southern Finland city of Lahti is well on its way to achieving its goal of becoming carbon neutral by 2025, while the rest of the country plans on accomplishing the same by 2035.

Cleaner, more sustainable power generation is a key part of the city’s plan, and it has opened two new power stations: Kymijärvi II, which runs on the city’s waste, and Kymijärvi III, a biomass power plant that uses waste from the timber industry and wood from certified, local forests.

More sustainable fuel sources reduce CO2 emissions by a figure equivalent to the amount produced by 60,000 Finns each year. Additionally, the Lahti Symphony Orchestra’s dedication to eliminating its carbon footprint has earned it the title of “the world’s first carbon neutral symphony orchestra.”

Original story was published by the European Sting on 18.05.2021 and can be found here.

Finnish children now watch TikTok instead of cartoons in the morning

According to research by telecoms company DNA, TikTok may have replaced cartoons to become Finnish children’s favourite form of entertainment in the morning.

The company recorded a spike in the use of the popular video-sharing platform between between 7 am and 8 am, noting that a comparable rise in activity does not occur with other social media.

One in five parents surveyed this year said their children, aged 5–12, use TikTok daily or frequently during the week—a 9 per cent increase compared to last year. Additionally, 62 per cent of teens aged 13–16 use the app daily—26 per cent more than last year.

Thanks to the method perfected by Cambridge University professors Shankar Balasubramanian and David Klenerman, the sequencing process can be executed in one day for $1,000 (the same process cost billions of dollars twenty years ago).

The technology can also be used over a million times a year, and has proven useful in tracking COVID-19 mutations during the pandemic.

Original story was published by Daily Sabah on 19.05.2021 and can be found here.

The city of Helsinki has called for proposals to turn the Makasiiniranta area of the South Harbour into a waterfront district. The new project will include a complex that will surround a planned Museum of Finnish Architecture and Design Museum.

The 83,000-square-metre site, which is currently used for cruise ships, will feature shops, restaurants and a hotel. The plans must integrate the existing urban landscape while keeping the city’s sustainability goals in mind. The application deadline is 21 June.

Original story was published by Architect’s Journal on 17.05.2021 and can be found here.