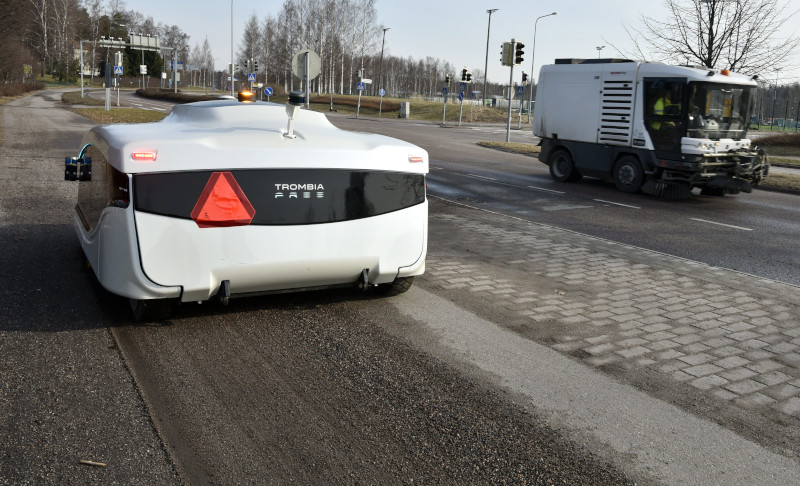 Trombia Free on the streets of Espoo earlier this month/Lehtikuva

Finnish railway company VR Transpoint made international headlines this week when it unveiled a “super train” that weighs the equivalent of 92 trucks when fully loaded.

The one-kilometre long train, named Mörkö (after the fictional character in the popular Moomin series), carries 7,000 tonnes of weight and 80 wagons, breaking the Finnish record for train tonnage.

It operates as part of transit traffic between Vainikkala and Hamina. VR Transpoint, which is owned by the VR Group, has managed to gradually increase train size over the years due to the improved hauling capacity of its electric locomotives.

The test trial will be monitored by Helsinki City Construction Services, Stara, along with Trombia Technologies, the company that developed the robot. The sweeper was also tested in Espoo earlier this month.

The trial in Helsinki will assess Trombia Free’s efficiency, functionality and noise levels, thereby determining its benefits and limitations.

Finnish education technology (edtech) start-up HEI Schools was in the spotlight this week after it received 2 million euros in funding to bring Finland’s research-based early education model to the world.

HEI Schools, which was founded in 2015 by the University of Helsinki along with other partners, already has 14 learning centers operated by local entrepreneurs in China, Australia, Indonesia, Korea, Argentina, Saudi Arabia, Egypt and Finland.

According to analysts, the replacement of paper with electronic methods has resulted in a steady decline in the demand for graphic paper. Demand has reduced at an annual rate of 5 per cent for several years, with the COVID-19 pandemic only accelerating the decline.

Finland’s e-mobility incentives came into focus as well, as news outlets highlighted a scrapping bonus that the country offers which includes an option for an e-bike.

Finnish citizens receive a scrapping premium of 1,000 euros when they hand in their old fossil fuel burner. This bonus can be used to purchase a pedal electric cycle (pedelec), an electric car or a public transport pass. The majority of Finns opt for the bike.

Dubbed a super train, Mörkö is pulled by two Vector electric locomotives and has broken Finland’s previous train record of 6,000 tonnes and 66 wagons, which was set last Spring.

Larger trains could have a lasting impact on energy consumption in railway transport as they help reduce emissions by transporting more freight in one trip.

Original story was published by RailFreight.com on 20.04.2021 and can be found here.

The City of Helsinki and Trombia Technologies will test Trombia Free, reportedly the world’s first autonomous street sweeper, on the streets of the capital city this week.

The test trial will take place in the Jätkäsaari district of Helsinki from 19–27 April and will assess whether the city can eliminate disruptive noises and emissions when cleaning streets in residential areas.

Although Trombia Free is capable of stopping when it detects pedestrians, it will be accompanied by an operator during the trial for the safety of residents. The test trial will be conducted on weekday evenings.

Original story was published by TheMayor.eu on 19.04.2021 and can be found here.

Edtech start-up HEI Schools has raised 2 million euros in series A funding to introduce Finland’s early education model, which includes holistic development and wellbeing along with academic skills, to other countries.

The company provides a learning center concept, digital curriculum platform and pedagogical tools based on the principles of early childhood education in Finland to educators outside the country.

Original story was published by eSchool News on 16.04.2021 and can be found here.

Finnish forestry giant Stora Enso’s decision to shut down two of its paper mills has drawn focus to the effects the decreasing demand for paper has on the industry. Last year, another Finnish forestry company United Paper Mills was forced to shut down its plywood plant in Finland as well as a paper plant in France.

According to analysts, with the declining demand for graphic paper, the paper industry will likely be centred on cardboard and packaging paper in the future.

The paper and pulp industry accounts for 20 per cent of Finland’s total exports, and is one of the key sources of revenue in the country.

Original story was published by XinhuaNet on 21.04.2021 and can be found here.

Finland offers citizens the chance to buy a pedelec with the scrapping bonus they receive when turning over their old fossil fuel burners.

The scrapping bonus can be used in the purchase of a pedelec, an electric car or a ticket for public transport. Of the 3,200 Finns that applied for the offer so far, 2,000 chose the e-bike option.

Original story was published by electrive.com on 15.04.2021 and can be found here.