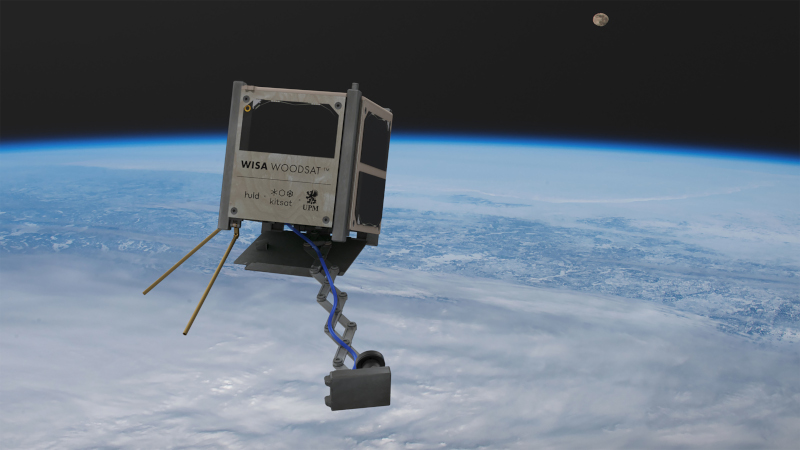 Finland could soon become the first country in the world to launch a wooden satellite into space. The project, called the WISA Woodsatt, has been developed by Finnish space companies Arctic Astronautics and Huld, in partnership with forest industry firm UPM Plywood.

The nanosatellite is based on the CubeSat standard, measuring roughly 10x10x10 cm and weighing a kilogram. The satellite will be launched by Rocket Lab’s electron vehicle in New Zealand later this year.

The device will orbit the Earth at an altitude between 500 and 550 km, and will complete a full orbit every hour and a half.

An innovative new ad campaign in Finland also made waves this week when it used gibberish to highlight the issue of illiteracy.

Finnish NGO World Vision worked with ad agency TBWA\Helsinki to develop the PSA (public service announcement) billboard ads, which featured a fake language that no one would be able to understand.

The organisation also enlisted social media influencers to share posts using the same made-up language. The campaign was aimed at illustrating the education divide in the country, which has become worse than ever due to the pandemic.

Finland was also part of a historic milestone when Gulf Air, the Kingdom of Bahrain’s national carrier, made its first transcontinental lower emission flight.

Neste’s MY Sustainable Aviation Fuel reportedly has the potential to decrease greenhouse gas emissions by up to 80 per cent compared to fossil jet fuel and helps reduce the carbon emissions of flying.

Meanwhile, the results of a new study indicate that 95 per cent of preschoolers in Finland exceed the World Health Organisation’s (WHO) recommendation for daily screen time.

The study, which was conducted by the University of Helsinki and included 699 children aged 1–5, found that nearly all the 5-year-olds used screens for over an hour, raising their risk of psychological problems.

In other news, Aalto University, University of Helsinki and the state-owned VTT Technical Research Centre of Finland have announced that they will collaborate to set up an institute that will focus on researching quantum science and technology.

InstituteQ: The Finnish Quantum Institute will provide graduate and industrial education programmes aimed at developing expertise in the field of quantum technology.

The cube-shaped satellite will feature a suite of onboard sensors that include two cameras and will monitor the behaviour and durability of specially designed plywood to assess the use of wood in space structures.

The satellite, which features a selfie stick, will be sent into space from the Mahia Peninsula launch complex in New Zealand.

Original story was published by The Hilltop News on 14.04.2021 and can be found here.

An illiteracy PSA which involved plastering billboards with a completely made-up language drew the attention of passersby across Finland over the Easter weekend.

The campaign, which was developed by the charity World Vision Finland and agency TBWA\Helsinki, also ran online, provoking a suitably confused reaction from those who came across it.

According to a statement made by World Vision and TBWA\Helsinki, over 700 million people across the world do not have access to education, with the coronavirus pandemic only serving to worsen the situation.

The national carrier of the Kingdom of Bahrain, Gulf Air recently made history with its first transcontinental flight using low emission fuel.

Gulf Air worked closely with Neste as well as the Bahrain Petroleum Company (Bapco) to ensure the success of the flight.

Original story was published by Aviation Pros on 12.04.2021 and can be found here.

Finland to enhance expertise in quantum technology through new institute

Aalto University, University of Helsinki and VTT Technical Research Centre of Finland have signed an agreement to form InstituteQ: The Finnish Quantum Institute, an umbrella organisation through which they can further develop quantum science and technology.

The institute will combine the resources and expertise of the three founder institutions, all of which have been researching, teaching and commercialising quantum science and technology for decades.

The primary aims of InstituteQ are to coordinate national research efforts, provide education that will equip the workforce with required skills and drive innovation in the field.

Researchers at the University of Helsinki conducted a study which monitored the amount of time preschool-aged children spent on electronic devices such as televisions and video game consoles at the ages of 18 months and again at the age of 5.

Almost all the 5-year-olds (95 per cent) reported spending over an hour—the WHO-recommended maximum daily screen time—on the gadgets.

Increased screen time is a significant risk factor for psychological issues such as hyperactivity, even in small children.