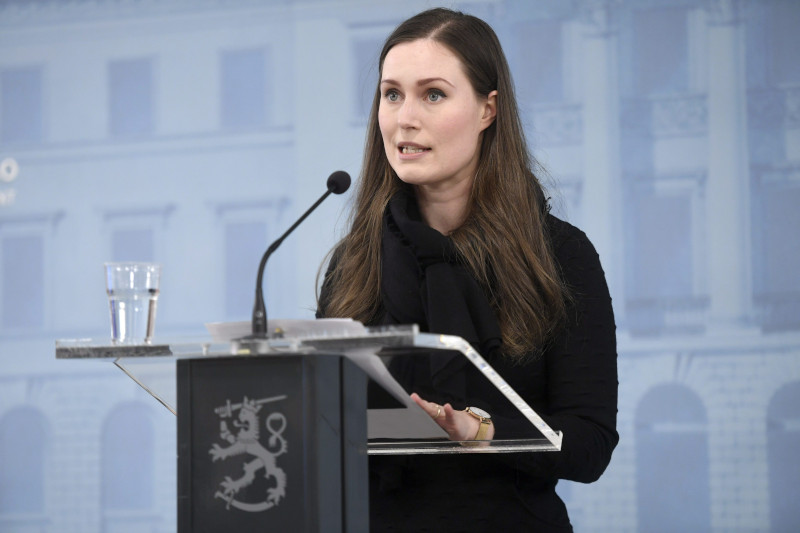 A new report has revealed that Finland’s female-led government has repeatedly been the target of misogynistic harassment and abuse online.

The report, which was published by the NATO Strategic Communications Centre of Excellence based in Latvia, states that the five ministers most frequently attacked were all female.

The ministers have been overwhelmed by often explicit messages that attack their values and question their leadership skills. Finnish Prime Minister Sanna Marin herself has been targeted by Twitter posts which include sexist tropes about women and household duties.

Meanwhile, a newly formed Finnish company has been gaining significant attention for its attempts to develop and commercialise a nasal spray vaccine for COVID-19.

The vaccine is based on gene transfer technology and was shown to be successful in animal studies. According to the company, intranasal delivery appears to bring about a better immune response than intramuscular administration.

The truck was provided by the Vuorenmaa dairy farm, which has been using cow manure to generate heat and electricity at its biogas plant for several years.

Valio is using biogas-based fuel as part of its strategy to reduce milk’s carbon footprint to zero by 2035. Using biogas instead of diesel can reportedly decrease the fuel’s lifecycle greenhouse gas emissions by up to 85 per cent.

International papers also covered the news that Finland is planning to strengthen its partnership with Indian IT firms.

Indian Prime Minister Narendra Modi spoke with Marin at a virtual conference on Tuesday, following which the countries reiterated their commitment to ongoing collaboration in the fields of artificial intelligence, quantum technologies and 6G research, among others.

In other news, the Government of Finland will collaborate with the United Nations World Food Programme (WFP) to develop a coalition to support meal programmes for schools on a global scale.

Finland is the first country to join the initiative, which seeks to find sustainable and innovative sources of funding to advance school feeding programmes and improve the overall outcomes for school children across the world.

A new report from the NATO Strategic Communications Centre of Excellence has found that female politicians in Finland are often the victims of online misogynistic abuse, which has left some afraid to speak out.

As per a 2019 study, 28 per cent of municipal officials in the country admitted to being less willing to participate in decision-making after being attacked with hate speech.

Most of the abusive messages directed at the female ministers were traced to anonymous accounts rather than bots, which makes it harder to moderate the harmful content.

Original story was published by Politico on 17.03.2021 and can be found here.

Rokote Laboratories Ltd., a company recently co-founded by the University of Helsinki and the University of Eastern Finland, is currently seeking funding to further develop a nasal spray vaccine meant to protect against the COVID- 19 virus.

The vaccine uses gene transfer technology, which has been successfully applied in clinical trials to treat cancer and cardiovascular diseases.

The team has reportedly been developing the vaccine, which takes new variants of the virus into account, since Spring last year. Clinical trials are expected to begin in a few months.

Original story appeared in European Pharmaceutical Review on 10.03.2021 and can be found here.

In a bid to cut emissions, Valio is using biogas produced from its Vuorenmaa dairy farm to fuel a milk truck.

The biogas plant at Vuorenmaa currently generates around 1,900 MWh of biogas annually. The milk truck is able to use the fuelling station near the farm while it collects milk.

Finland currently generates around 15 million tonnes of manure every year; however, using biogas obtained from cow manure for fuel purposes is a fairly new development.

Original story appeared in Bioenergy News on 15.03.2021 and can be found here.

India, Finland to collaborate in the digital domain

Following a virtual summit between Prime Ministers Narendra Modi and Sanna Marin, India and Finland have renewed their commitment to work closely together in the areas of innovation, research and development and technology.

Indian information technology giants Wipro and Tech Mahindra are partnering with Finnish companies to enable the use of 5G and 6G technologies in India and other countries.

The Finnish Minister for Development Cooperation and Trade, Ville Skinnari, will be the founding member of the UN World Food Programme’s (WFP) committee. The committee’s goal is to help governments across the world reintroduce and scale up school meal programmes.

Schools were shut in several countries at the onset of the COVID- 19 pandemic, leaving 370 million children unable to access their daily school meals. This has led to rising levels of hunger and malnutrition.

Original story was published by Mirage News on 12.03.2021 and can be found here.