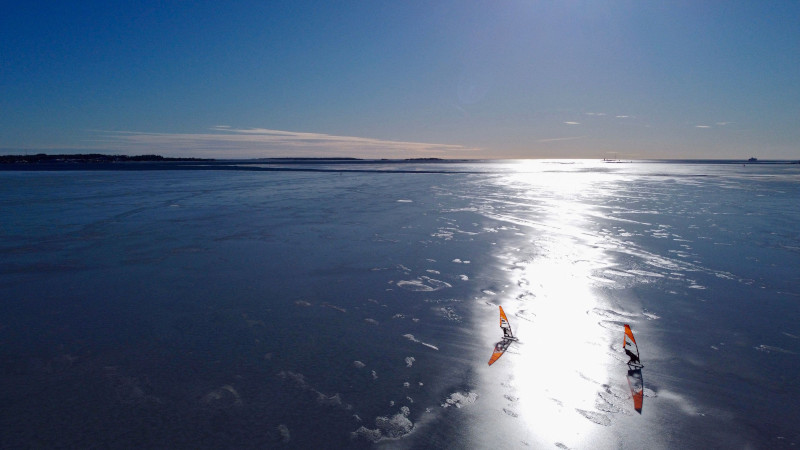 A group of volunteers in Finland have captured the attention of news desks across the globe with their attempts to create the world’s largest ice carousel.

The giant spinning ice disk measures over 300 metres and is powered by a boat motor. It will be able to claim the Guinness world record if it can complete an entire rotation.

The project was developed by renewable energy specialist Janne Kapylehto, who first hit upon the idea for an ice carousel in 2017 and has since built over 60.

Windsurfing enthusiasts in Finland have also been carving up the ice on the frozen Baltic Sea. Many have attached skates to their sailboards to engage in ice surfing—an emerging sport that can only be practiced in a few places in the world.

Ice surfers can reach speeds of up to a 100 kilometres per hour, and usually wear protective safety gear such as crash helmets and body padding in case the blades slide out on a turn.

With the surface of the Baltic Sea currently frozen solid with ice that’s upto 30 cm thick (reportedly strong enough for a small truck to drive on), there has been growing interest in the sport in the past few weeks.

A team of researchers from Aalto University also came into the spotlight this week for their attempts to create a video game that can ease the symptoms of depression.

The unnamed project is led by Professor Matias Palva and allegedly includes a complex network of features capable of producing a therapeutic effect.

The game, which is not meant to replace medication or therapy, was shown to improve cognitive functioning in patients who played it actively for eight weeks.

Meanwhile, claims that the Finnish government chose to source their COVID- 19 vaccines from pharmaceutical companies despite having a patent-free vaccine already available surfaced this week.

According to Kalle Saksela, chair of the Department of Virology at the University of Helsinki, his team had already developed a patent-free vaccine, which he claims would be enough to inoculate the entire population of Finland, by May 2020.

However, the government decided to follow in the footsteps of other countries and went with the vaccines produced by Pfizer, Moderna and Astrazeneca instead of investing in Saksela’s research.

Finnish manufacturer Valio was also in the news this week for its popular plant-based pizza cheese, which is suitable for vegans.

The company is set to launch the Oddlygood Mozzarella brand in the US through its local division and has reportedly received substantial interest from pizzerias.

A group of volunteers are attempting to carve the largest ice carousel in the world in a frozen lake in Lappajarvi, western Finland. The team is using chainsaws to create the spinning circle and hopes to complete the task by Monday.

The project’s leader, Janne Kapylehto, claims to have invented the ice carousel in 2017. The concept has gained popularity rapidly since then and now has its own category in the Guinness World Records.

The world record for largest ice carousel is currently held by a 225-metre carousel in Minnesota, US.

A growing number of windsurfers in Finland are kitting out their boards with skating blades and taking to the frozen seas. Proponents of the sport claim that despite the cold, ice is a less challenging surface than water.

According to ice surfing enthusiast Feodor Gurvits, there are currently around 1,000 ice surfers across the world, with about 20 at peak athletic performance.

The sport is mainly concentrated in the Nordics, Baltics and Poland, with some practitioners in the US, Canada and Russia as well.

Original story was published by Deccan Herald on 02.03.2021 and can be found here.

A team of scientists at Aalto University is working on developing a “therapeutic action game” that can ease the symptoms of depression.

The idea was inspired from a study that involved using a special training video game to treat amblyopia or lazy eye. The project’s budget is currently less than 1 million euros, but the researchers have received additional funding of 500,000 euros.

The game is not suitable for patients with severe psychotic depression or the elderly. The researchers are currently seeking a game designer, programmer and artist for the project.

Original story was published by Game World Observer on 02.03.2021 and can be found here.

The Finnish government has been criticised for spending resources on acquiring COVID- 19 vaccines from private pharmaceutical firms when a team of researchers in the country had reportedly already developed a patent-free vaccine early last year.

The vaccine, which is in the form of a nasal spray, was developed by a research team headed by  Kalle Saksela, a professor of virology at the University of Helsinki.

The researchers were unable to proceed further with the intellectual property-free product owing to a lack of funding for large-scale patient trials. The pharmaceutical industry generally follows a profit and patent-based funding model.

Valio USA, a local division of Finnish dairy manufacturer Valio, is launching the Oddlygood Mozzarella brand in the US. Made with shea, coconut oils and potato starch protein, the cheese is ideal for pizzas.

Oddlygood Mozarella is currently used as a vegan option in 300 Kotipizza restaurants and other eateries across the Nordic region, and has received positive feedback so far.

Original story was published by Pizza Marketplace on 26.02.2021 and can be found here.