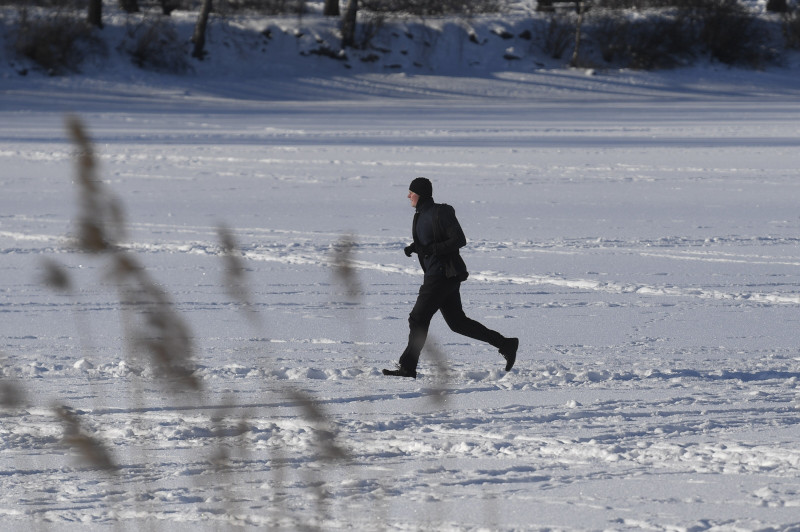 Most runners in the country still prefer to wear shoes/Lehtikuva

Finnish sports enthusiasts have embraced a new trend—running through snow wearing only socks and no shoes. The latest craze hit headlines across the world this week, with many marvelling at the phenomenon.

According to those who indulge in the practice, running without footwear—even in snow that reaches depths of half a meter—provides a sense of freedom.

Finland also received attention for its success in effectively tackling disinformation. Despite a flood of incorrect information about the COVID-19 virus, over 80 per cent of Finns are reportedly willing to take the jab.

Jussi Toivanen, chief communication specialist at the Finnish prime minister's office, credits the population’s ability to discern fake news to the education system in the country.

New research by optical retailer Lenstore has found a strong link between overall happiness and universal healthcare, suggesting that Finland is consistently ranked the world’s happiest country owing to its healthcare system.

The study analysed 84 countries and concluded that those without universal healthcare registered an average happiness rating that fell 0.4 points below that of countries that offer it.

Finland scored 89.6 points based on the quality and accessibility of its healthcare. Despite ranking first in the World Happiness Report, it was beaten by Iceland (ranked fourth happiest), which came in first with a score of 93.6 for its healthcare services.

In other news, 240,000 Finns recycled the waste fats from Christmas cooking for the fifth time in a row this year as part of the Ham Trick.

The Ham Trick is an ongoing campaign organised by Finnish oil refining and marketing company Neste and is aimed at promoting a circular economy.

Meanwhile, the Finnish government plans to donate 4.3 million euros to help children in Lebanon. The donation will go to UNICEF’s “No Lost Generation” programme.

The money will be used to combat child labour and marriage by increasing learning opportunities through informal training and skill development.

Finns take to running in snow without footwear

Fitness freaks in Finland have begun running in deep snow with multiple layers of socks instead of shoes. Adherents of this latest fad claim that the activity provides stimulation for the feet while also offering fitness benefits.

Barefoot running is a popular pastime in warmer weather, but the heavier than usual snowfall this winter has not hindered running enthusiasts in the country.

Woollen socks are now abundantly available, as a large number of Finns have reportedly adopted knitting as a hobby this winter.

Finland winning the fight against disinformation

Finland recently ranked first in an annual index that measures resilience to disinformation. Since 2014, schools in the country have included media literacy in their curriculum.

Children are taught to critically analyse news sources and identify propaganda from the age of 6. Schools encourage students to study how the media portrays various incidents and to question the effect that social media has on their attitudes and perceptions.

Original story was published by The Telegraph on 16.02.2021 and can be found here.

Study claims Finland is the happiest country due to universal healthcare

New data from Lenstore suggests countries such as Finland and Iceland rank high on the UN’s World Happiness Report due to the quality and accessibility of their healthcare.

Finland has topped the list of happiest countries for three years in a row. The World Happiness Report takes into account factors such as life expectancy, corruption levels and freedom of expression.

Despite being declared the fourth happiest country, Iceland beat Finland in Lenstore’s study by scoring 93.6 for its healthcare offerings. Finland scored 89.6, tying with Spain.

Original story was published by the Daily Express on 11.02.2021 and can be found here.

The Ham Trick—Neste’s campaign to recycle waste fat and advocate a circular economy—reached a new record for the fifth year in a row.

The campaign has drawn in more participants every year since it began, with an increased network of almost 350 collection points this year.

The waste fats collected via the Ham Trick are used to produce Neste MY Renewable, and can create enough renewable diesel to drive a car around the world up to 17 times.

Original story was published by Petrol Plaza on 12.02.2021 and can be found here.

The Finnish government plans to donate 4.3 million euros towards supporting the wellbeing of children in Lebanon. The money will go to UNICEF’s “No Lost Generation” programme, which focuses on supporting children in crisis-hit countries.

The ongoing pandemic and economic crisis in Lebanon have had a highly damaging effect on children’s living conditions, depriving them of proper education and facilities.