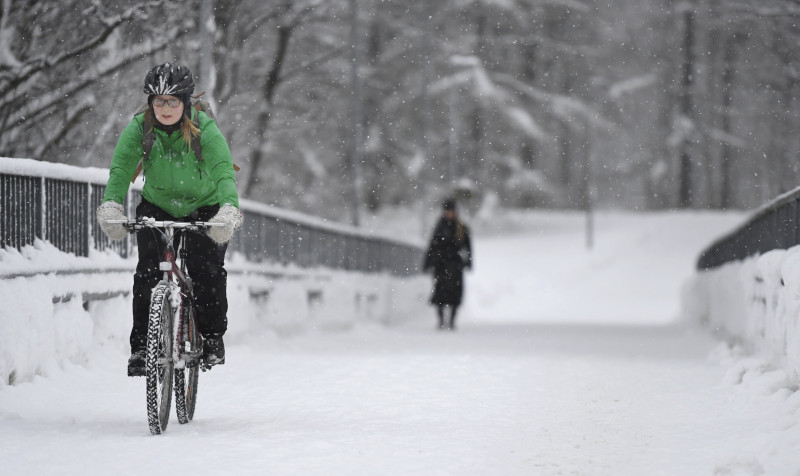 The Finnish city of Oulu gained recognition for its residents’ enduring love for cycling this week. Despite being covered by snow for five months a year, bikers in the Central Finland city brave the weather to keep pedalling even through the coldest and darkest months.

One reason for this is that the ploughing of cycle paths is given antecedence over that of roads during winter. Additionally, Oulu uses a digital map that indicates real-time conditions of bicycle, pedestrian and car routes.

The freezing conditions in the city, which usually experiences temperatures below -10° C in January–February, actually aid movement as ploughs only clear away the upper layer of the snow while the rest gets compressed when cyclists pedal over it.

In other news, Estonian MEP (Member of the European Parliament) Urmas Paet has criticised Finland’s decision to shut its borders.

According to Paet, Finland’s actions are in direct violation of the EU’s principles of free movement. The Finnish government announced the implementation of new restrictions on cross-border travel last Friday.

The stringent regulations will restrict the movement of workers that commute between Estonia and Finland.

Finland also made headlines this week for being the site of a new project supported by the European Space Agency (ESA).

The project involves testing autonomous vehicles—driverless vehicles that are capable of sensing their environment and functioning without human intervention—on a specially designed intelligent road in Lapland.

The 10-kilometre-long path, which is known as Snowbox, uses cameras, lidar technology and reflective panels, and contains pressure sensors which detect road surface conditions, as well as the speed and type of vehicle passing over it.

The app, which recently expanded its offerings to include retail and groceries, has raised $530 million in its latest funding round, bringing the total investment in the firm to $856 million.

Wolt has stated that it will use the money to continue its expansion beyond restaurants and food delivery.

Meanwhile, a consortium of Dutch companies has signed a contract to buy 330 gigawatt-hours (GWh) of power per year from Finland for the next 10 years.

The expected annual output, which will be generated by a wind farm, is tantamount to the electricity consumption of 40,000 households.

Oulu a pedaller’s paradise in Winter

In the Finnish city of Oulu, around one in every five trips are made by cycle. While this number drops to 12 per cent in winter, it is still very high compared to cities like London, where biking accounts for 2 per cent of all trips made.

Cycle infrastructure and maintenance is a high priority, even in winter. Oulu’s traffic planners put pedestrians and cyclists first when designing the city’s routes. It currently has a network of over 800 km of segregated bike paths.

Oulu’s cycle association has been promoting the city as an all-year-round cycling destination through events such as the Winter Cycling Congress.

Original story was published by Euronews on 25.01.2021 and can be found here.

In a social media post, Paet questioned the impact of travel restrictions on infection rates, suggesting that the effect is not significant enough to warrant the action.

He also criticised the distinctions made between professions, as healthcare workers from Estonia are still permitted to enter Finland, while teachers and construction workers are not.

Original story was published by the Baltic Times on 24.01.2021 and can be found here.

An ESA-supported project is conducting experiments on autonomous vehicles on a 10-km stretch of Finland’s E8 highway. The Arctic-PNT project aims to establish the site as an ideal location for manufacturers to test this kind of vehicle.

The stretch of road, known as Snowbox, is equipped with pressure sensors and power and fibre optic lines. It is connected to the FinnRef satellite navigation network to ensure precise positioning.

The location was chosen specifically for its low temperatures and conditions such as fog, mist, rainfall and snowstorms, which create a difficult environment for autonomous driving.

Wolt prepares to become the Amazon of Finland

Founded by Finnish startup entrepreneur Mikko Kuusi in 2014, food delivery app Wolt had  just 10 restaurants and a handful of downloads in 2015. Today, the company has over 10 million users in 23 countries, 27,000 restaurant and retail partners and 2,000 employees.

In its ongoing bid to expand into new markets, Wolt has raised $530 million in a funding round led by investment firm ICONIQ Capital.

While Amazon is huge in many other countries, it still does not have a presence in Finland, where there is an unmet demand for online retail services.

A consortium of four Dutch companies, which includes Heineken and Phillips, have signed a 10-year contract to receive 330 GWh of power annually from Project Mutkalampi in Finland, which is set to build 35 wind turbines by 2023.

According to the companies, using renewable energy will help prevent over 230,000 tons of carbon emissions every year. Neoen, a renewable energy company based in France, is building the wind farm.

Original story was published in The Economic Times on 25.01.2021 and can be found here.