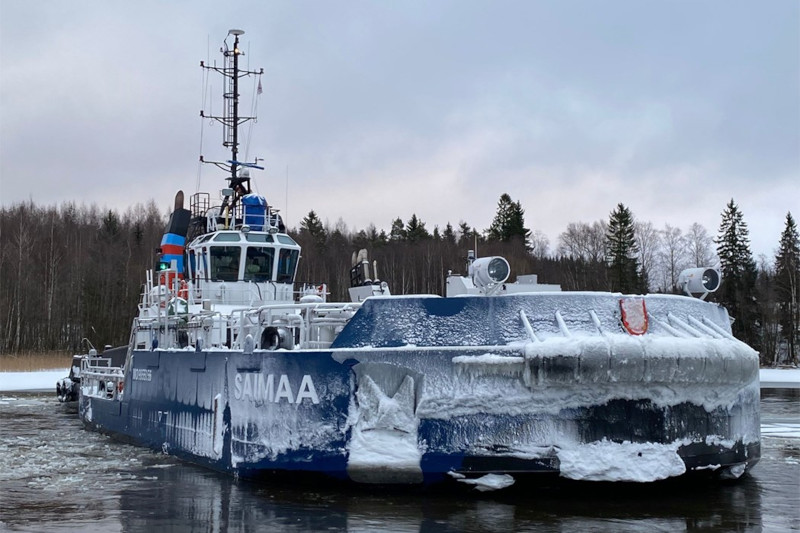 International newspapers covered the launch of Finland’s new icebreaker model–the Calypso–this week. The sustainable vessel is fitted with a hybrid motorised removable bow, which is capable of cutting through ice upto 70 cm thick.

The motorised bow is the largest of its kind and is powered by technology developed by Danish multinational Danfoss.

Turku Repair Yard supplied the bow as part of the  €7.6-million Winter Navigation Motorways of the Sea II project. The aim of the project is to enhance the maritime winter navigation system and reinforce safety during winter.

News outlets also revealed that Finland and Latvia are set to begin manufacturing armoured vehicles together.

Finnish defence services provider Patria is setting up joint ventures with Latvian companies to develop an armoured personnel carrier and command and control vehicle for Latvian and Finnish armed forces.

While Estonia joined the project in Spring last year, it pulled out in October owing to escalating costs.

According to reports, Finnish researchers and fur farmers are cooperating to develop a coronavirus vaccine for mink and raccoon dogs.

Both species, which are bred for their pelts, are believed to be especially susceptible to COVID- 19 infections.

The Finnish Fur Breeders’ Association (FIFUR) is working on developing the animal vaccine with its partner network.

Meanwhile, the city of Helsinki is set to implement a new municipal experiment to combat youth unemployment.

The experiment will begin with just under 50,000 unemployed people being able to access the municipality’s new employment services.

The number of unemployed people under the age of 25 rose by 111 per cent, while unemployment among people aged 25–29 increased by 96 per cent in 2020.

In other news, concerns over the coronavirus pandemic have led to the postponement of the European Shooting Championship in Finland.

The shooting events were meant to be held from February 26 to March 6 in the city of Lohja (Uusimaa), and would have determined qualifications for the Tokyo 2020 Olympics.

The bow is powered by a hybrid electric system which uses two generators. Using this kind of system to power icebreakers will significantly reduce fuel consumption and help Finland achieve its ambitious target of lowering emissions by 40 per cent by 2030.

The new vessel is currently moored in Mustola harbor in Lappeenranta and has begun operations in Lake Saimaa.

Original story was published by Hellenic Shipping News Worldwide on 07.01.2021 and can be found here.

Finland and Latvia will cooperate to develop armoured personnel carriers for both countries’ defence forces this year.

Patria, a joint venture between the Finnish government and Norwegian defense group Kongsberg Defense & Aerospace AS, is currently signing agreements and negotiating with Latvia-based companies that produce sheet metal and service heavy trucks.

Patria expects to begin mass production of the vehicles this year and has identified at least six Latvian manufacturers that fit their requirements.

Finnish researchers working on a coronavirus vaccine for mink

Researchers at the University of Helsinki and Finish fur farmers are collaborating to develop a vaccine that will safeguard the health of animals bred for fur and the people that work with these animals.

According to researchers at the university, preliminary results of the immunisation of farmed fur animals have been promising.

While Finland has not yet detected any COVID-19 infections in farmed mink, at least 10 countries have reported instances of the same. Denmark, a leading producer of mink fur, culled millions of the animals last year to prevent the transmission of the virus to humans.

Original story was published by the West Australian on 12.01.2021 and can be found here.

The Finnish capital will launch a new plan to battle unemployment among people below the age of 30. Reports indicate that while youth unemployment decreased significantly in 2019, the coronavirus pandemic has resulted in fewer job vacancies and a steep rise in unemployment.

The new strategy is specifically targeted at harder-to-employ groups and the long-term unemployed. Those meeting this criteria will be provided with new types of service planning beginning in March.

Original story was published by TheMayor.eu on 08.01.2021 and can be found here.

The European Shooting Confederation (ESC) has called off the European 10-Metre Championships in rifle, pistol and running target, which were to be held in Lohja, Finland, due to the coronavirus pandemic.

The events would have offered six qualification opportunities for the Tokyo 2020 Olympics—four in the rifle categories and two in the pistol categories. The ESC hopes to stage the event at a later date.

Original story was published by Inside the Games on 12.01.2021 and can be found here.