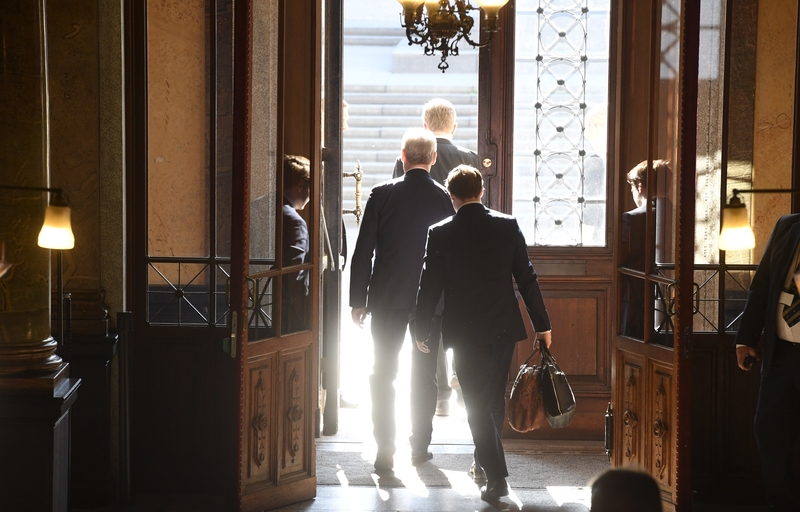 Rinne and his new government leaving a press conference on Thursday (Image: Lehtikuva)

MUCH OF THIS WEEK’S international coverage of Finland concerned the formation of the national government, which will be bringing the first left-wing prime minister in over 20 years into power.

Much of the coverage from major publications concerned the progressive and ambitious policy proposals of the incoming government, as well as the fact that the majority of the cabinet is female.

Meanwhile, Finland’s recent pledge to become completely carbon neutral by 2035, the most ambitious climate plan of any country so far, managed to grab headlines around the globe. In other news, a popular fashion magazine ran a lengthy op-ed explaining why Finland may be emerging as the next fashion capital of Europe.

Finland has got its first new left-of-centre prime minister in 20 years after the country's social democrats successfully formed a new government on Thursday.

Spending is agreed to rise by 4 billion euros, with the priorities including education, social security, and infrastructure investment.

The last social democratic prime minister in the Nordic country was Paavo Lipponen, who last won an election in 1999 - two decades ago. He left office in 2003.

Since then, the office of prime minister has been handed back and forth between two liberals and conservative parties: the Centre Party and the National Coalition.

The new government is dominated by the social democrats, who have seven ministers, while the centre party have five. The Green have three, leftists two, and the Swedish-speakers' party two.

The Centre Party's Mika Lintila and Katri Kulmuni will take the finance and economy minister portfolios, while the Greens' Pekka Haavisto will represent the country on the world state as foreign minister.

The Greens also get the environment ministry, while leader of the Left Alliance Li Andersson becomes minister for education. The leftists also control the health and social affairs ministry.

The new government is one of the most gender equal in Europe, with 58 per cent of the ministers being women. It however falls short of the 2007-2010 Finnish government where 60 per cent of ministers were women.

At the last election in April the Social Democrats came top, but with just 17.5 per cent of the vote amid a splintering of parties. They narrowly beat the right-wing populist Finns Party and centre-right National Coalition into second and third place respectively.

Original article appeared in The Independent on 06/06/19 and can be found here.

Finland’s new left-leaning coalition government has pledged to make the country carbon neutral by 2035 as part of a policy programme that includes a major increase in public spending on welfare and infrastructure.

The Social Democratic party leader, Antti Rinne, who formed the five-party alliance of centrist, leftist and Green parties after narrowly beating the nationalist Finns party in an election in April, said it was time to “invest in the future” after years of austerity.

Pekka Haavisto, the Green League party chair, said the programme – which will increase public spending by €1.23bn (£1.1bn) a year and spend another €3bn on one-off investments, notably in the rail network, over the four-year lifetime of the government – was “probably the most ambitious in the world” on climate issues.

“Building the world’s first fossil-free, sustainable society is going to require much more than nice words on paper, but we’re determined to make it happen. It’s an exciting journey we want to embark on.”

Harkki said the government’s programme, which will have major implications for the country’s key forestry industry and use of peat for energy, was far from perfect. But with “the broad public support we now have for transformational change, the fights can be won”, she said.

Original article appeared in The Guardian on 04/06/19 and can be found here.

Will fashion’s next big thing come from Finland?

There’s a Finnish invasion taking over fashion. But it’s a quiet, behind-the-scenes kind of invasion. “We have alumni in practically every house in Paris,” says Tuomas Laitinen, senior lecturer at Helsinki’s Aalto University.

The nexus of Helsinki’s fashion industry is not a traditional fashion week like in other European cities — it’s Näytös, Aalto’s end of year runway show for its graduating Bachelor’s and Master’s fashion students. Laitinen oversees each year’s show, and in the past 10 years he’s observed the school’s profile slowly rise throughout Europe and beyond.

Thanks to the fact that many of its graduates have won awards from Festival d’Hyères and the LVMH Prize, Näytös is nowadays a hot ticket not just for locals in the fashion industry, but headhunters from LVMH and Kering looking for new talent. It’s no surprise then that Aalto topped Business of Fashion’s list of best fashion schools for 2019.

That’s certainly a boon for those who graduate from the elite university, but it also presents a challenge for Finland’s fashion industry – as headhunters look to poach interns for brands like Saint Laurent and Rick Owens, much of Finland’s young talent leaves to find success. Finland is frequently compared to its neighboring Sweden, but while the former may have Aalto’s reputation, the latter has the financial backbone to support an industry.

“There’s not really an industry in Finland. In Sweden there is, it’s not a high fashion industry. It’s a commercial, high street industry,” Laitinen says. “All that is very commercial, mid-market. There’s nothing wrong with that, but it’s not fashion, it’s garments.”

The local industry is growing though, albeit slowly. Finland is best known for the groundbreaking fashions of Marimekko in the 1960s, but Laitinen says the industry remained relatively quiet for 50 years. “It really had an impact,” he says of Marimekko. “But since that there hasn’t really been anything, until 10 years ago.”

Nowadays there are burgeoning designers like Rolf Ekroth, an Aalto graduate who has received financial backing to run both his namesake label and revive Finnish brand Terinit. That is a recent, but welcome, change, Laitinen says. “There will be more hopefully cases like Rolf’s. And that might be a birth of an industry or a proper let’s say fashion scene,” he adds.

“We have alumni in practically every house in Paris.”

But Aalto remains at the center. A sort of pseudo-fashion week, known as Fashion in Helsinki, has sprung up around Näytös to harness its hype, with international press descending on Helsinki for lectures, events and of course the final graduate show.

This year’s lineup brought out international stylists, editors, and designers to not only attend Näytös but also participate in lectures on the state of the fashion industry and visit events highlighting up-and-coming Helsinki brands like Nomen Nescio, ensaemble and Mannisto.

That editors and stylists from around the world have eyes on Helsinki gives hope to young graduates that going abroad isn’t the only option.

Original article appeared in Hypebeast on 03/06/19 and can be found here.